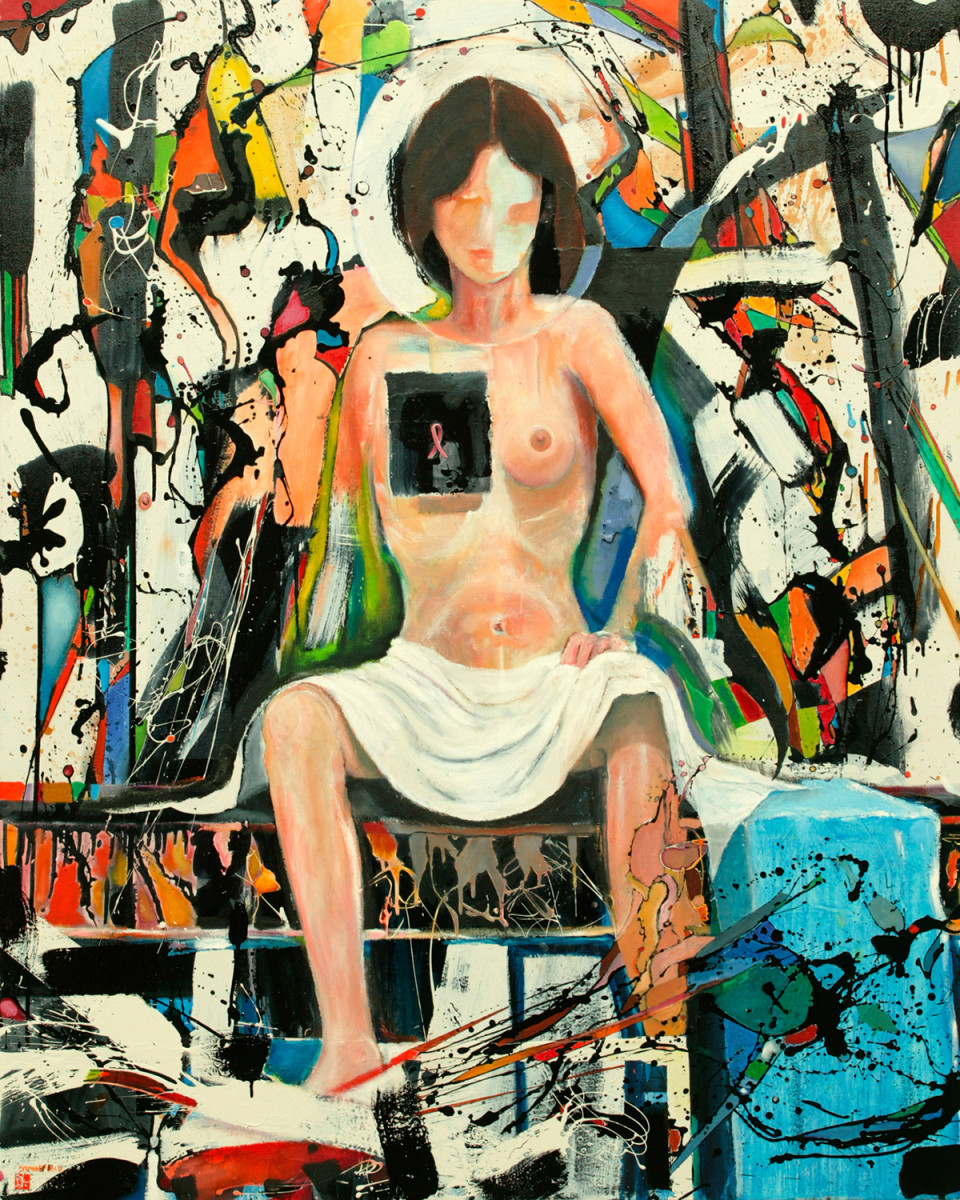 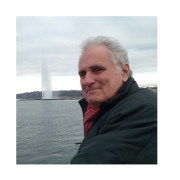 The “Celebration of Healing” project began as a response to friends who had been affected by breast cancer. I wanted to do 10 paintings/portraits of people celebrating life in spite of their illness, sometimes even because of it. The project needed a broad demographic. I wanted real people for these paintings, because this disease affects us all. Friends, breast cancer advocates, and physicians referred a steady stream of potential models to me. Nearly two years later I ended up with 21 five-foot-by-four-foot oil and shellac paintings on canvas and a book of the paintings with stories of the models written by Eve Hoffman. 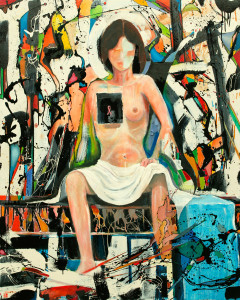 My interviews with prospective models were as varied as the people themselves. One came with her mother and her sister. Another arrived with her husband and two preteen daughters. As I watched the close interaction between mother and daughters, I asked if the daughters could be included in the painting wearing sleep shirts. A few days later, the family agreed. The girls also decided it was okay for Mom to take off her shirt. Another writer at an artists’ retreat introduced me to his father, a breast cancer patient. (Yes, men get breast cancer.)

A financial advisor arrived with her husband. He was clearly suspicious. I had been expecting such a husband. When he noticed books about St. Francis on the studio floor, we began to discuss them. His wife interrupted, “Hey! Excuse me, but this is about me!” The husband ended up modeling with her, the two of them wandering around the studio in terry-cloth robes and teasing one another, communicating about breast cancer, it seemed to me, in a non-clinical way for the first time. A few weeks later they called: “We want to come to the studio and share some of our anniversary cake with you.”

Part of my conversation with the models had to be about nudity, modesty, and shyness. I wanted to find the edge of each model’s comfort zone in order to produce the most energy. One brought a treasured turquoise shawl to wrap around her upper body. She posed with her back to me, head turned over her shoulder in my direction. After a time she said, “This pose doesn’t make a compelling story.” Bit by bit she turned to expose one reconstructed breast still missing a nipple. 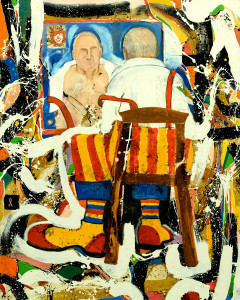 Another model arrived bald and asked, “What should I do? I am ready for anything!” I asked her if she would undress except for her underwear. She stood up with her hands on her hips and replied, “I don’t think I’m wearing any! Oh yes, I’m wearing a thong!” Another model, after looking at nudity in the paintings, said, “Sal, I don’t think I can do that. I’m just getting my body back.” One asked, “May I bring my minister to talk with you?”

Once a model and I began to work, the model moved around the studio without direction until the best pose simply happened. I abstracted figures just enough to offer models some privacy. The backgrounds are chaotic like broken stained glass, like illness; the figures are calm, like wellness. As time passed, we talked about the process of living, the energy healing required, an appreciation for being alive. When there was fear or confusion about participation in the “Celebration” project, I reminded the models, “You know, you don’t have to do this.” At times I’d put the paintbrush down, and we’d just sit and talk, sharing a cup of coffee. We experienced much trust between us.

The project gave permission to tell stories, feel less isolated, to cry, grieve, celebrate, laugh. One studio visitor turned to me and said, “You just cannot imagine what it’s like for a doctor to tell you that you have a lump in your breast.” Another who’d lost a young friend to breast cancer stood surrounded by the portraits and asked, “May I read the eulogy I wrote for my friend? I keep it in my purse. This will be the first time I’ve been able to read it out loud.” Another guest with advanced abdominal cancer sat reading a notebook of the stories and paintings. She repeatedly held the pages to her chest, saying, “These are my stories, my stories!” A prostate cancer patient did the same thing.

An oncologist showed copies of a few of the paintings and stories to one of his patients in a Minnesota hospital. She looked up at him and said, “These give me hope.”

At an exhibition of the paintings at the Hudgens Center for the Arts in Duluth, I watched as each member of a breast cancer support group, unaware I was the artist, posed next to their “favorite” painting for a photograph.

One morning a model handed me a poem she’d written. The last line was: “My first real sense of healing was when I saw my mangled body appear on canvas.”

Editor’s note: “A Celebration of Healing” will be on display at the Aurora Theatre in Lawrenceville, January 14-February 7, in conjunction with the Pulitzer Prize-winning play Wit by Margaret Edson. Sal Brownfield and Eve Hoffman will sign copies of their book A Celebration of Healing after the matinee and before the evening performance of the play on January 23 and on February 6. Click here for tickets and showtimes.

Sal Brownfield (www.salbrownfield.com) has been a fellow at the Hambidge Center and is a former lecturer in the Art and Ethics program of Emory University’s Center for Ethics. His work is held in numerous private collections and has been shown in galleries across the United States as well as in El Salvador and Italy. To see more of Brownfield’s “Celebration” portraits, go to www.celebrationofhealing.com.

Next week: Eve Hoffman talks about letting the subjects of the paintings tell their own stories