For Arthur Blank, buying a Major League Soccer franchise is as emotional a move as he’s ever made.

Blank, co-founder of the Home Depot and majority owner of the Atlanta Falcons, is first and foremost a smart businessman who has learned to connect with customers and fans while holding true to his core philanthropic values of making the community a better place.

And that will still be true with his new MLS franchise — the 22nd in the league. 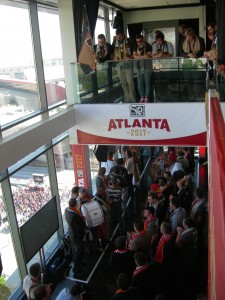 But the game of soccer and the new Atlanta team that will be playing in the retractable roof stadium in 2017 is touching Blank in a way that no other venture has touched him before.

“It is very close to my heart,” said Blank, as his voice began to quiver during an interview before the celebratory announcement Wednesday afternoon. “It’s very personal to me. It’s wonderful to be able to share something with my associates, my fans, my family and my new family.”

Joshua Blank, 17, plays soccer “at a very high level,” and he has since he was quite young, Arthur Blank said.

Joshua acknowledged that his father really came to appreciate the sport of soccer through him – coming to his games and learning to share a passion for the sport. 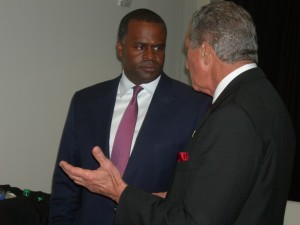 Two years ago in early February, while attending games in Joshua’s soccer league, Arthur Blank met Angela Macuga, who he described Wednesday as “the poster child of what it means to be a soccer mom, and I mean that in a great way.”

Macuga’s two children, Emily and Drew, also are strong soccer players competing in the same league, which gave Blank and Macuga an opportunity to share their love for the sport and each other. They got engaged this past February.

“That’s what soccer is to me – a lot of emotion,” Blank admitted during the announcement.

When asked how much Blank paid for that emotion, MLS Commissioner Don Garber said “between $70 million to $100 million” without getting more specific. “That’s more than we’ve told anyone,” he added. 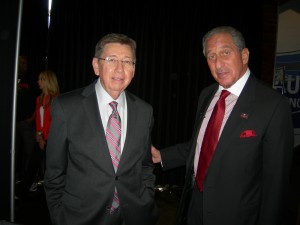 The announcement took place at Ventanas, which has a spectacular window front view and balcony overlooking the aquarium (built and paid for by Blank’s former partner – Home Depot co-founder Bernie Marcus) and Centennial Olympic Park.

Garber had to leave our interview with Blank a little abruptly to go board a helicopter so he could make a most dramatic entrance by helicopter on the helipad on top of Ventanas to make the formal announcement.

Before leaving, both Garber and Blank said that now was the right time to bring soccer to Atlanta. Garber had worked in the National Football League for 16 years before joining MLS 15 years ago.

Blank and Garber began talking about a possible MLS team in Atlanta about a decade ago. At the time, MLS was locating its teams in stadiums outside of downtown areas, and that model was not working all that well.  MLS then realized that it was having a resounding success in urban downtown stadiums where there were diverse ethnic populations. 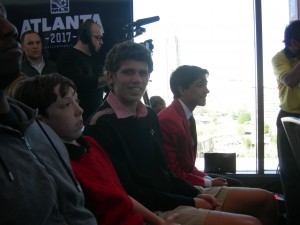 That was about the time that Blank began formalizing plans for a new Falcons stadium that currently is under construction next to the Georgia Dome. Having soccer play in the new stadium was part of the design from the beginning.

“We started to talk again more seriously a couple of years ago,” Blank said. “The momentum built up very naturally.”

Garber said MLS was always interested in striking a deal with Blank.

“Everybody in the sports industry knows Arthur and the reputation he has and the commitment he has to run a first-class operation,” said Garber, adding that having a passionate owner is critical to having a successful MLS franchise in a community. 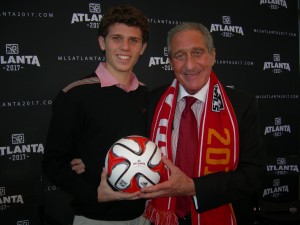 “Ten years ago wasn’t the right time to have an MLS team in Atlanta,” Garber said. “I’m not sure Atlanta would have been the right city for us them. The league is now twice as large. Now is the right time.”

Atlanta has been the largest television market without a MLS team, and it will be one of the first MLS teams in the South.  Miami first needs to be able to build a stadium for a team that is to be owned by soccer star David Beckham. And Tampa also is slated to have a new soccer team possibly as early as 2016.

Asked if MLS would have considered selling an MLS franchise to any owner other than Arthur Blank, Garber instantly said: “No. We wouldn’t be in Atlanta without Arthur, not only because of who he is, but because of what he has done with the Falcons. Plus this downtown is very important to us.” 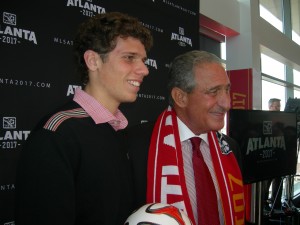 Blank and the Atlanta soccer team will have a longer time frame to market the franchise — two-and-a-half years — than any other franchise in the league before the team starts playing.

As expected, Blank will use that period to connect with fans — asking them to participate in a competition for a name, a logo design and the color scheme for the team and the uniforms.

“It will be very much fan driven,” Blank said.

Unlike the NFL where there is a profit sharing among the 32 teams, a large percentage of the revenues generated by an MLS franchise are driven locally. That means that it is especially important for Blank and the soccer team to be able to connect with fans and the community in Atlanta, he said. 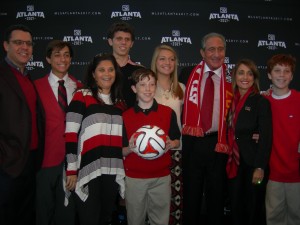 So Blank said his plan is to put a winning team on the field; to have an incredible stadium design; to give the fans an opportunity to connect to the team; and for players to reach out to the community in a host of ways.

Joshua Blank, who said he watches as much soccer on television as he can, said the family is planning to go to the 2014 FIFA World Cup in Brazil – taking place from June 12 to July 13.

As the Atlanta soccer franchise announcement came to a close, a rumbling in the crowd already had begun. People were buzzing about Atlanta going after a future FIFA World Cup.