The two team owners revealed their vision on how development and community revitalization around their sports facilities could transform downtown Atlanta.

The closed meeting, held in Cox Enterprises offices in Ponce City Market, included many of top business leaders in the Atlanta region as well as Atlanta Mayor Kasim Reed.

“There’s a certain vibrancy that Atlanta has right now,” said John Dyer, CEO of Cox Enterprises, who is serving as the 2017 chair of the Atlanta Committee for Progress (ACP). “Arthur being here is always exciting. The new stadium has a vibe… You get to see Atlanta through the eyes of that stadium.” 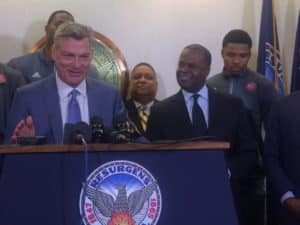 Dyer went on to say that Ressler said he wished he had been able to make his presentation before Blank, who is a hard act to follow.

“I do know that Tony wants to reach out and talk about what his team has conceptually planned for the gulch,” Dyer said. “That’s part of having a vibrancy around us that’s going to propel Atlanta for decades to come.”

As Blank left the meeting, he said his team talked about the stadium (including the fan-friendly pricing for food and drink) as well as the investment in revitalizing the Westside communities near the new Mercedes-Benz Stadium.

Blank’s team reported that 460 Westside residents were involved in building the new stadium, and 150 residents are now helping operate the stadium.

In all, Blank said he “couldn’t be happier” with how the new stadium has been received by Atlantans.

But, what could be even more significant would be a close relationship between Blank and Ressler on how to connect the area around Philips Arena and the Mercedes-Benz Stadium – bridging over a hole that has existed in downtown Atlanta for decades. 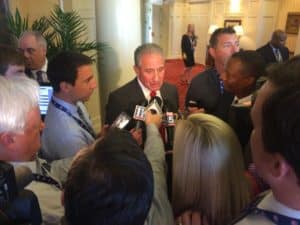 “Tony and I talked about a week or so ago, and I look forward to more,” Blank said. “He has a very aggressive plan. And we will help him in any way we can.”

According to Dyer, Ressler told the executives attending the ACP meeting how impressed he was to be in a room with so many powerful CEOs focused on improving Atlanta.

“He said that does not exist in his city (Los Angeles),” Dyer said. “That speaks volumes.”

ACP also received a report from the City of Atlanta about all the construction and contract work that is in process thanks to the expansion at Hartsfield-Jackson International Airport, Renew Atlanta, MARTA expansion, TSPLOST as well as water-sewer investments.

“We are talking about nearly $10 billion,” said Duriya Farooqui, ACP’s executive director. “It’s sort of unprecedented investment. Clearly it needs to be executed properly in the course of transition. We want to make sure a new mayor has the right support.” 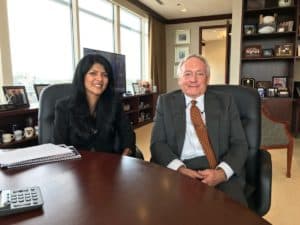 Farooqui has met with every one of the serious mayoral candidates, and she said all of them recognize that ACP provides a “unique resource” in the city, and they have all indicated they would like to continue the blue-ribbon business-civic group, even though some have “caveats.”

Atlanta’s efforts to win Amazon’s HQ2 also was briefly brought up by the mayor, and the business community leaders pledged to do everything they can to help.

In fact, right after ACP, Gellerstedt was convening a group of business leaders and real estate leaders in his office to talk about how Atlanta can present the “big idea” to capture Amazon’s attentions.

The only CEO who didn’t sound super enthusiastic was Home Depot’s Menear.

“I don’t have any comment,” Menear said after the meeting. Then he intriguingly added: “Has Amazon been good for Seattle?”