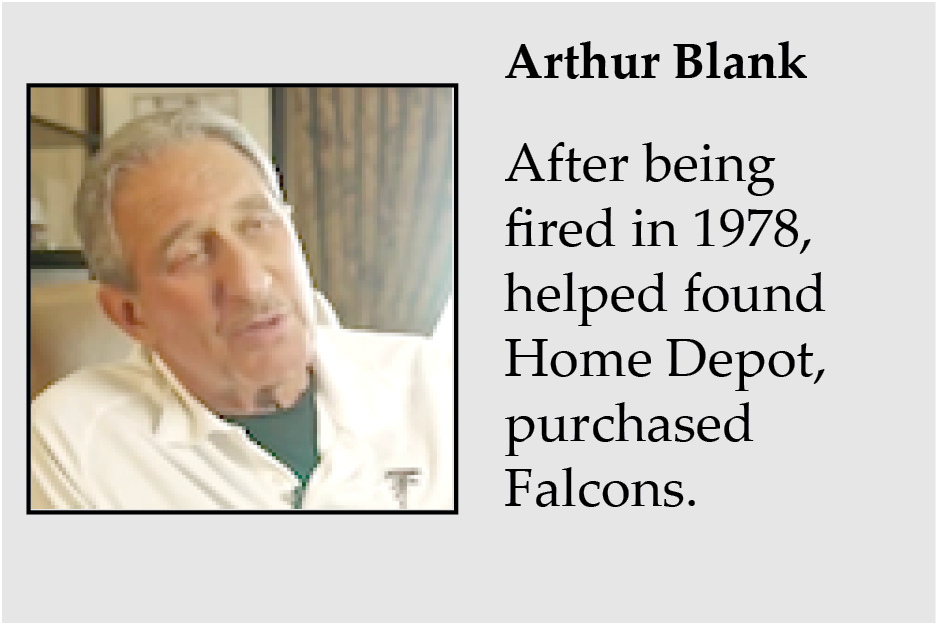 The story of the phoenix – the mythical bird that rose from the ashes with renewed youth to live through another cycle – is often interwoven with the history of Atlanta. Yet no phoenix-like business story has so benefited our region as that Moment in 1978 when Arthur Blank and Bernie Marcus were fired.

“We were running the most successful home improvement company in the country at that time,” Arthur told us while filming our accompanying Moments video. “So when we got fired during what was supposed to be a five-year budget meeting, we were both shocked.

“Looking back, if it wasn’t for that Moment – and the co-founding of Home Depot – what would I be doing today? Probably doing financial planning or filling out tax returns or something of that nature,” Arthur said.

Ninety-five percent of the massive wealth that Arthur earned after 19 years as president of Home Depot and four years as CEO – helping to build the Atlanta-based company into the darling of Wall Street in the 1980s – is now being “recycled” through a family of for-profit companies and philanthropic foundations. He owns the NFL’s Atlanta Falcons, the Atlanta Falcons Physical Therapy Centers, PGA TOUR Superstores and the 9,000-acre Mountain Sky Guest Ranch in Montana.

The Arthur M. Blank Family Foundation, founded in 1995, donates millions of dollars each year to more than 100 non-profit organizations with a concentration in early childhood development, education, green space and the arts.

Over his years in Atlanta, Arthur spent some of his spare time sitting in the stands of the Georgia Dome, watching the continued struggles of the Atlanta Falcons franchise.

“I’m a very competitive person and I love competition, I love to win and I was constantly frustrated as a season ticket holder about the Falcons and the experience,” Arthur said. “The Falcons, in 42 years never had back-to-back winning seasons, which is kind of unbelievable and not widely known in Atlanta.

“My view was that I could sit in the sidelines the next 30 or 40 years of my life and complain or I could try to buy it, be part of the process and fix it. I have been blessed here with a great team of people. I have always believed in bringing the best people together, creating the right environment, giving them the resources, being a cheerleader for them, and making sure the culture is set in place then getting out of the way and allowing them to make the decisions and do what they need to do.”

Arthur spent a lot of time watching and listening – to fans who attended games at the Dome, to those who boycotted the game-day experience and to the professional players who shared their wish list for amenities at the Flowery Branch facility and preferences for training camp accommodations. Then he began to invest money to improve the Dome and the Falcons headquarters. It has paid off with four winning seasons in a row and a team that is predicted to return as a playoff contender.

“So this (purchasing the Falcons) has been a second great defining moment in my life. You couple those two moments with six children, and I don’t really have a lot to complain about.”

Three months ago, Arthur was the graduation speaker at Auburn University’s College of Business. “As you enter the next phase of your life, never let fear, or the potential of any setback paralyze you with decisions you will have to make,” he said.

“The main thing is self-confidence. Learn from your mistakes and move on,” he urged the graduates, suggesting they continue advancing America’s tradition of innovation, leaving worry about limitations to the attorneys, board members and bankers.

“We need your unencumbered minds, your creativity and risk-taking personalities to carry on the American dream,” he said.

Arthur’s American dream all began with that Moment he was caught in the crossfire of an internal political battle in the executive suite of Handy Dan. Arthur was vice president of finance (Bernie Marcus was CEO.)

“I was only 37 at the time, Bernie was 13, 14 years my senior, so he was 50. We both had opportunities to stay in corporate America and work for other companies, but we both had a lot of self-confidence. We were fortunate enough to have a good financial backer.

“And looking back I would say that was definitely a defining Moment for my whole life because it gave myself and my partner the chance to live certain values that we felt because of our family backgrounds and upbringings, and religious orientation that were important to us in terms of making a difference in other people’s live.

“In this case of Home Depot, it is the lives of our customers, our associates, and lives of our investors, our financial investors. Looking back over the last 30-odd-years and you think of the number of families we have been able to support since they sent their kids to a college education, or took care of parents that were aging or sick, or had a second home, or just lived an enhanced life. Their quality of life and their family, to know that you were part of that and supportive of that, it’s wonderful.”

Next in Moments: Rev. Dan Matthews, who was on the phone with his father, who described the events of 9.11 to him on the phone.