Arthur Blank’s soon-to-be-released book – Good Company – is a treasure-trove of secrets for business and life.

Blank, a co-founder of the Home Depot and owner of the Atlanta Falcons and Atlanta United, shares his formula for what makes a successful enterprise – be it in business or in life.

In a Zoom interview on Aug. 28, Blank spoke of his perspective of how business “can serve the goals of both profitability and living with purpose.”

Blank was compelled to write “Good Company” as a way to impart the lessons that he has learned in running everything from the Home Depot to his ranches in Montana to his PGA Tour SuperStore.

“The beauty of this book is that they’re not complicated,” said Blank, who added its particularly relevant now given the pandemic and economy. “Actually, the same values that have helped me make the difficult decisions that I’ve had to make really turned out to be not so difficult.”

Blank boils down those lessons to six core values:

Those values are rooted in the culture that the co-founders of the Home Depot established more than four decades ago. Partners Blank and Bernie Marcus would often wear the orange aprons and work the floor to interact with customers so they could have an intimate understanding of the business.

Blank often has bucked tradition to find out what he needs to do. 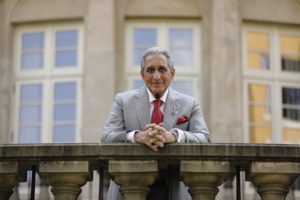 In 2002, when he was completing the purchase of the Atlanta Falcons, Blank accompanied the team to an away game in St. Louis. On the way home, he decided to sit in the rear compartment of the plan to sit with the players rather than coaches and the team executives.

Blank as the players: “What can I do for you? What do you need?”

To his surprise, the players told him: “You need to fill that building up.” At the time, the Georgia Dome was half full for football games, and many in attendance were cheering for the opposing team. The players wanted a full house with Falcons fans in the stands.

“That one-hour flight was worth a dozen strategy meetings with the team’s executives or coaching staff,” Blank wrote in the book, explaining how he decided to sell season tickets for $100 (about $10 a game), a move that led to the Falcons selling out nearly all their home games.

That’s just one of the many inside stories Blank shares in the book, which covers his abrupt departure from the Home Depot after the arrival of Robert Nardelli, who almost destroyed the company’s culture. Blank also recalls the painful Super Bowl loss in 2017 when the Falcons blew a 28-3 lead to lose in overtime. And he describes how his son, Josh Blank, convinced him to bring major league soccer to Atlanta.

“The beauty of these six core values is they really cover virtually every set of circumstances, whether they’re positive in business and revenue and profitability is going through the roof or going the other direction,” Blank said.

In many ways, Blank said he has just adapted the lessons he was taught by his parents (his father died when Blank was only 15).

“My mother used to say to me:’ You do the right things for the right reasons, and you live with the consequences,’” Blank said in the interview. “That has kind of driven me my whole life.” 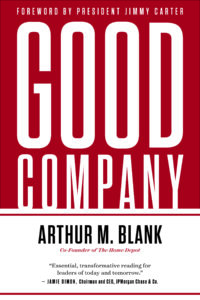 Cover of the book “Good Company” by Arthur Blank

And that’s why he intends to invest up to 95 percent of his wealth into his family foundation. “So, all this great success we’ve had in all of our businesses, including the Home Depot, all of that is going to be recycled back into creating more opportunities for more people,” Blank said.

In fact, in the book, Blank described how a “good company” becomes “community,” adding that the word company “means fellowship or companionship.”

Blank said he hopes the book will help young men and women make decisions by not just focusing on profitability and transactions.

“It’s always about focusing on the people we’re serving and honoring the frontline associates, the ones who are closest to customers, fans and guests,” Blank said.

Blank is practicing what he’s preaching. All the proceeds of “Good Company” will go to the National Center for Civil and Human Rights, and Blank has made an initial contribution to the Atlanta attraction of $300,000 to celebrate the memoir’s publication on Sept. 15 by publisher HarperCollins.

When talking about current events, Blank expressed concern. “Our country is divided,” he said. “The extreme polarizations we see today in our country is very unhealthy. That is fueled by the gaps that do exist between the haves and have nots, the wealthy and the not so fortunate. We can start right here in Atlanta.”

Blank went on to say that’s “one of the causes of the social unrest that we have today. We have work to do.”

At 77, Blank has pulled back from the day-to-day operations of his for-profit businesses. “I’m not working less. I’m just working in different ways,” Blank said. Then he talks about how President Jimmy Carter at 94 is driven with his purpose to make the world a better place.

In the forward that Carter wrote in the book, the former president said people have asked him and Arthur Blank when the world will end.

“The answer is: it doesn’t. The work is just beginning,” Carter wrote in the forward. “We all are presented with the choice to mend the world, to bring it one step closer toward a harmonious state of being.”

Blank described it as part of the Zen philosophy that says ideally “you should be able to confuse your work and play.” He has seen Carter, Warren Buffett and Bill Gates continue to confuse work and play by knowing their purpose. 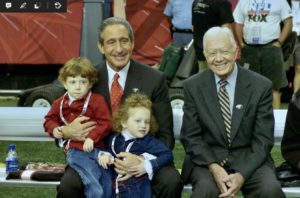 Arthur Blank and his twins, Kylie and Max, with President Carter before a Falcons game in 2004
(Photo credit: Jimmy Cribb/AMBSE Creative)

Currently, Blank is interviewing candidates to succeed Penny McPhee as president of his family foundation. He tells them all: “Look at the way his family is wired. We’re wired to go where the heat is the greatest, where the fire is the hottest, or the light Is the darkest. That’s how a family is wired, whether it be doing foundation work or work in terms of any of our businesses.”

Blank now is hopeful that the “next president, whoever it may be, will recognize the value of bringing people together as a country” and recognize the needs and opportunities in a myriad of issues – from social justice to income inequality – saying they aren’t red or blue issues. “One party cannot resolve them all. They have to work together.”

Blank hosted the NFL owners’ dinner in a tent on the grounds of the Center for Civil and Human Rights, which was open for the guests to visit the museum’s exhibits. In attendance were the late U.S. Rep. John Lewis, former Atlanta Mayor Andrew Young and the three living children of Martin Luther King Jr. – Martin III, Dexter and Bernice.

Many owners told Blank how affected they were by the visit, and he hoped everyone gained a “deeper awareness of our shared history.” Blank ended his remarks that night with a quote from Dr. King: “We must come to see that the end we seek is a society at peace with itself, a society that can live with its conscience.”

Towards the end of the interview, Blank talked about the last book King was writing when he was assassinated. The title is particularly relevant today – “Chaos or Community.” As Blank sees it, the question is whether we as a country will take on these problems collaboratively and collectively, or whether we will resort to chaos.

“Protest is a good thing,” Blank insisted, adding that it has led to great progress in the country.

But Blank is concerned that in “too many cases, chaos is taking place.” He then quoted John Lewis, who said we have to be prepared to get into “good trouble and stay in good trouble” until we see nonviolent change.

“There’s more urgency today than there’s been in a very long period of time,” Blank said. “And I think that’s a really good thing.”