Arthur Blank’s next chapter to focus on family, philanthropy, community 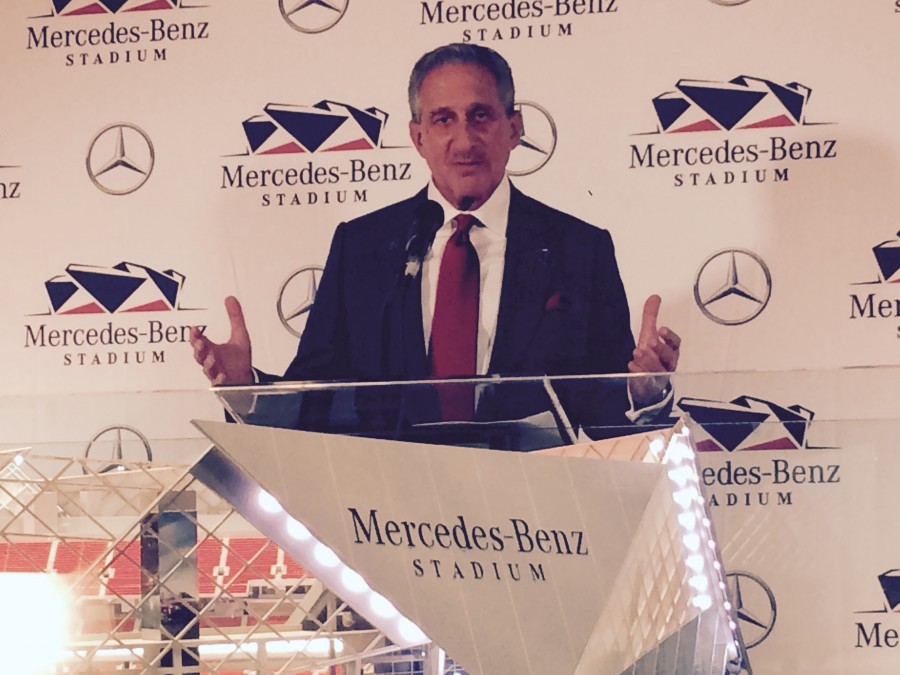 By Maria Saporta
As published in the Atlanta Business Chronicle on September 4, 2015

Arthur Blank, owner of the Atlanta Falcons football and the Atlanta United soccer teams, envisions the area around the new Mercedes-Benz Stadium being redeveloped into a mixed-use town center connected to Centennial Olympic Park with green space extending all the way into the Vine City and English Avenue communities.

In an extended interview on Sept. 1, Blank described the area around the new stadium as a combination of the development around the new SunTrust Park and a downtown Piedmont Park.

Blank said the Georgia World Congress Center “has done a fabulous job creating a point of destination” on its campus, which includes Centennial Olympic Park.

“I want to see activities around the stadium on non-game days, and we are going to be investing in that on the plazas and arcades,” Blank said. “There will be huge areas of green space — tremendous areas where you can do all sorts of community celebrations. We will actually have people downtown who will be responsible for activating these areas. My vision is that it becomes a downtown version of Piedmont Park.” 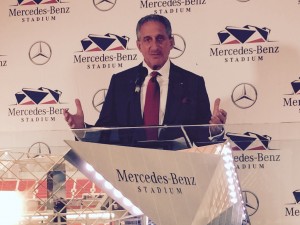 As for development around the new stadium, Blank acknowledged he has an ownership interest in property across Northside Drive, and he hopes to be able to influence how the area is developed.

“We are doing a lot of things that are not apparent now that eventually will be played out so that it will be much like the development around SunTrust Park,” Blank said. “It will be appropriate development: mixed-use space, apartments, homes and retail.”

A new chapter is unfolding for Arthur Blank, who in June wrote an e-mail to everyone working in his multiple enterprises, announcing a search for a CEO of AMB Group so that he could be less involved in the day-to-day management of his for-profit companies and focus more of his energies on his family and his nonprofit endeavors.

Blank said they have considered as many as 50 people for the CEO role. They are now down to eight to 10 candidates, and they have begun interviewing the finalists.

There is not a hard deadline for when a CEO will come on board because Blank said having a smooth transition of leadership is most important.

“I think in any institution, it’s important to have a healthy succession strategy — especially after the Home Depot experience,” Blank said.

He was referring to 2000 when he stepped down as CEO of the do-it-yourself retailer (one he had co-founded with Bernie Marcus), and turned the reins over to Robert Nardelli, then one of the top executives at General Electric.

“The Nardelli situation was an unmitigated disaster,” said Blank, explaining that The Home Depot Inc. had picked someone from outside its cultural core.

In the interview, Blank disclosed he had been pushing for another candidate to succeed him as CEO, Greg Brenneman, who in 2000 had just joined Home Depot’s board.

When Brenneman spoke to a management group of about 50 top Home Depot executives in the fall of 2000, Kim Shreckengost — then a key Home Depot executive — met with Marcus to tell him, “We found our guy.” That was just a couple of days before Nardelli was named the new CEO. Today Brenneman remains on Home Depot’s board as its lead director.

“Greg would have been my pick,” Blank said. “He’s a good friend, and he’s been good to the company. Everything he’s done has been great. He was articulate, emotional and he understood our culture.”

Marcus and Blank have been criticized for not grooming a Home Depot successor from within the ranks. It wasn’t for a lack of trying.

“We probably had a half-dozen people we would have considered who had become wealthy, happy and fat,” Blank said about the company’s generous stock options for its associates. “It was a product of our success.”

The Home Depot experience served as a beacon of what not to do.

One similarity is that Blank is looking outside for a successor. He explained that he is pleased with the executives at his existing businesses.

“I feel like all of our businesses are in a good place with good, experienced, qualified business leaders,” Blank said. “I’m feeling good, but I’m not getting younger, and I think it’s a good time. I can do this with the emphasis being on a good transition.”

“I looked at all of our leaders — they are all talented, and they are all on overload,” Blank continued. “But I didn’t think they had all the credentials for what I was looking for.”

For Blank, the most important quality will be someone who believes in a culture where the focus is on the customer or the fan.

“All our businesses are run with a concern on the economics, but the biggest concern by far is doing the right thing for the right reasons,” Blank said. “We know we need somebody who actually believes in our culture.”

When asked if he will be able to separate himself from the day-to-day management of his businesses, Blank immediately answered, “Absolutely.”

“I’m absolutely comfortable that I will be able to pull back. I don’t want to be involved in some of the things I’ve been involved in.”

And the timing is important.

“A year ago, I wasn’t completely comfortable that the stadium project was where it needed to be cost-wise, construction-wise,” Blank said. “I needed to be a lot more hands on.”

And he saw no reason to wait until 2017, when the stadium will open, to make the move. If someone comes on board later this year or early next year, there probably will be a transition of six months to a year when he will be working closely with the new CEO.

Another change is that Shreckengost, executive vice president of AMB Group, also will be leaving the organization. She has worked with Blank as his right hand for about 20 years, and Shreckengost said she is looking forward to starting another chapter.

Blank also made it clear he is not retiring, just recalibrating his role so he is working more on long-term strategy than day-to-day management.

Blank also mentioned his expanding family. He has six children, and his fiancée Angie Macuga has three. He also has four grandchildren with a fifth expected in October.

He also plans to spend much of his life (“nobody knows how long that will be”) on his philanthropy. “It’s a wonderful estate we have built, and 95 percent of my estate is going to be recycled into my foundation at some point,” Blank said. That includes the Atlanta Falcons, if and when the team is ever sold.

“There is an opportunity to do more, which I love doing,” Blank said about his philanthropy. “My kids are going to be more involved.”

Blank, who will turn 73 in late September, said that when his mother passed earlier this year, it has made him think more about his own legacy.

And that’s where the Westside comes in. When Blank was working on plans for the new stadium, he repeatedly said there needed to be a parallel effort to improve the communities adjacent to the $1.4 billion project.

The Blank Foundation has been working to build human capital — especially in Vine City and English Avenue — such as creating Westside Works, a program to teach people in the community employable skills, including construction jobs on the new stadium.

Because only 6,000 people live in those neighborhoods, Blank said he believes the foundation and other partners can make a difference. He said they are planting leadership skills among the residents. “I feel that things are moving,” he said.

But he also added that it is important that new investment protects the historical significance of the area. “My attitude is that we need to treasure history — both human and structural history,” Blank said. “The communities and cities that have had the foresight to honor, maintain, restore and enhance buildings of significance have looked back and said, ‘That was a good decision.’”