As Atlanta watches World Cup, is soccer trending up? 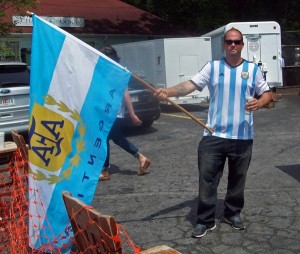 Sunday’s World Cup final at the Brewhouse in Little Five Points felt like a bar gathering for a big SEC football game, only louder and more crowded.

Hundreds of soccer fans packed the tavern and its parking lot to watch Germany defeat Argentina 1-0. Thirty TV sets served a blend of German and Argentinian immigrants and other diehard fans.

They staked out seats and invisible squares of asphalt and did not move from them. Those who arrived late had a difficult time finding a spot with a clear view of a television.

They included Argentinian expat Robert Sakk, who walked around the perimeter of the crowd carrying his nation’s flag and wearing one of the team’s light blue and white jerseys.

“It’s ingrained in your bones,” said Sakk, an HVAC specialist, about soccer and the World Cup.

Sakk, who was born in New York and raised in Argentina, said, “It is the one sport that truly holds a world championship.”

Marry Gebureck was also in the crowd. The 30-year-old from Hanover, Germany, who’s been living in Atlanta for six years said the sport, at home, “is the most important thing.” 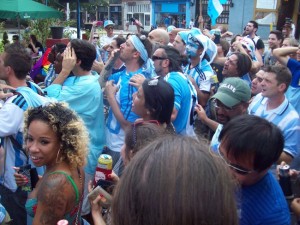 Once the match got started, it was difficult to find a spot in front of one of The Brewhouse Cafe’s 30 TVs to watch the World Cup final.

The fans hooted, hollered, face-palmed themselves at the sight of near misses. When Mario Goetze of Germany finally smacked the ball into Argentina’s goal in the 113th minute, a roar erupted from real and pseudo Germans, so loud that  a couple of children watching outside covered their ears.

Land of the free (kick), home of the save?

The closing of this year’s World Cup raises the same questions that get asked every time the planet’s biggest sporting event grabs the attention of Americans, who have historically been resistant to embrace the sport. Has it gained a permanent foothold as a spectator sport the U.S.? Will the jump in American viewership for the 2014 tournament translate into a growing American audience during the off years?

There is room for optimism. Atlanta’s Major League Soccer franchise, which is slated to debut in 2017, saw a spike in season ticket-pledges, according to the Atlanta Journal-Constitution: Prior to the World Cup, the team was receiving 31 pledges a day. On July 1, the day Belgium eliminated the U.S. National team, that number jumped to 143.

Nearly 25 million American viewers tuned in to the U.S. v. Portugal game, the largest audience to tune into a soccer game in American television history. That’s about 10 million less than the size of the TV audience for the 2013 NFL playoff games.

Meanwhile, Sling Media found that more viewers who use the Slingbox, the company’s streaming device that enables them to view satellite or cable TV on smartphones and portable computers, watched the World Cup than any other sporting event.

Between June 9 and June 15, according to the company, four times as many Slingbox users tuned into the World Cup than to the NBA championship, 11 times more than to the U.S. Open Golf Championship and 21 more times than to the NHL Stanley Cup final. 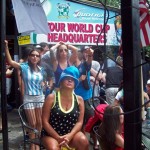 A quadrennial spike in interest?

Some  Brewhouse fans said they were skeptical the World Cup boost for American soccer would last.

“We still suck at it,” said Tisha Rain, a 28-year-old Army specialist from Marietta who is currently on leave. “If we get better, maybe. We need to get better.”

Rain was rooting for Germany because of her ancestry. Her great-grandparents were German. She called soccer her second-favorite sport behind American football.

Kim Fleischer, 47, was equally skeptical. He loves soccer. The health and life insurance salesman grew up in Oneonta, N.Y., about four miles from the National Soccer Hall of Fame and played the sport until high school, when his father pushed him to play football. Fleischer opted to watch the World Cup final game away from the Brewhouse, across the street at Little Five Points Pizza. There was little competition for a spot in front of the TV.

“We still don’t compete at a world level. Our best athletes aren’t playing it,” said Fleischer. “Unfortunately they’re not going to get multimillion-dollar contracts in MLS.”

But what if they could, Fleischer asked.

Still a need for metaphors 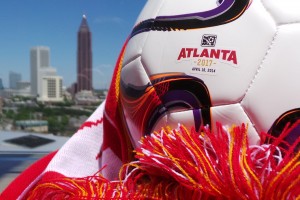 In the Brewhouse crowd, Alex Silva may have been the best person to explain why fans of that other football are so passionate about World Cup soccer to Americans who just don’t get it.

He was rooting hard for his neighboring, and rival, country.

I asked him, do Chileans and Argentinians get along?

“No,” he said simply. “It’s like this. I can cheer for Alabama to beat Ohio State and still wish they’d rot in hell.”

“It’s our people against your people,” Silva said as he tugged on his shirt. It’s the tribalism that drives the passion.

Surely an Alabama or Auburn fan can understand that. But when will casual American sports fans grasp, without metaphors, what the rest of the world already gets?