By Guest Columnist JAY HAKES, director of the Jimmy Carter Presidential Library from 2000 to 2013

Atlanta can boast of a special relationship with the Nobel Peace Prize. For starters, the medals for civil rights leader Martin Luther King Jr. (1964) and former President Jimmy Carter (2002) reside here. The Nobel Prize organization rates Martin Luther King as its most popular Nobel Laureate of all time in any category, just ahead of Albert Einstein for physics (1921), making the King medals arguably the most important of them all.

Moreover, historically the King and Carter medals have been displayed just off Freedom Parkway within comfortable walking distance of each other.* 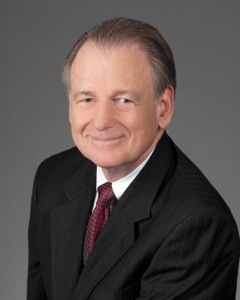 The medals of Bishop Desmond Tutu (1984) and Nelson Mandela (1993) neighbor each other in Soweto, South Africa. That’s about it for matching what Atlanta can offer for convenient viewing of the world’s most prestigious award.

Atlanta’s links to this prize extends beyond King and Carter.

The first American President to win the Nobel Peace Prize, Teddy Roosevelt (1906), was the son of Mittie Bulloch, raised in what is now Roswell, Ga.

The second, Woodrow Wilson (1919), spent part of his boyhood in nearby Augusta, Ga, where his father pastored a Presbyterian church.

The daughter of Bishop Desmond Tutu works at Emory University, and the Dalai Lama (1989) has served as a Presidential Distinguished Professor there. 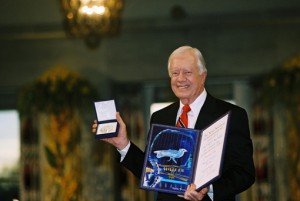 The grand-daughter of Nelson Mandela attended Clark University, and the daughter of Kenyan winner Wangari Maathai (2004) once worked at the Carter Center.

Morehouse College, of course, is the alma mater of Martin Luther King Jr., and President Carter attended Georgia Tech before heading off to the U.S. Naval Academy.

In recent developments, Bangladeshi winner Muhammad Yunus (2006) has established a secondary residence in Atlanta. Yunus and his Atlanta team are helping organize the 2015 Summit of Nobel Peace Prize Laureates that will be held in Atlanta from Nov. 15 to Nov. 19, 2015. The event likely will feature the largest assemblage of Nobel Peace Prize honorees in the history of the planet. 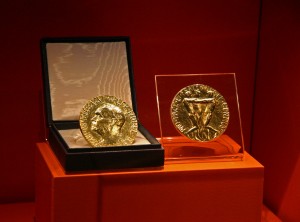 One can also speculate that local notables like Andrew Young and Ted Turner should be considered for future prizes. Menachem Begin and Anwar Sadat, co-winners in 1978, could hardly have earned their medals without the skilled mediation of President Carter.

With all these connections, there is still an aura of mystery surrounding details of winning a Nobel Prize. As standard practice, each winner gets a gold medal and two bronze, along with a specially commissioned work of art.

Each medal should be considered an “original,” including bronzes at the King Center and the Plains historic site. Because President Carter gave both a gold and a bronze to his presidential library, its museum provides a rare opportunity to see both sides of the medal at the same time. 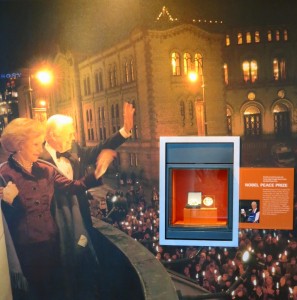 Rosalynn and Jimmy Carter upon receiving the Nobel Peace Prize

The long established Carter Center carries on contemporary applications of the principles of the Nobel Peace Prize. The opening of the Center for Civil and Human Rights will provide another opportunity for the people of Atlanta to keep abreast of the substantive issues of peace.

The abundance of local Nobel connections might lead some to take them for granted. On the other hand, it might inspire parents to take their children to see medals of great historic significance, help identify our city to the world as a very special place, and teach us more about how to make peace in a messy world.

Jay Hakes, who retired as director of the Jimmy Carter Presidential Library in 2013, currently devotes his time to speaking and writing about issues related to the American presidency and U.S. energy policy.

*The King Nobel Peace Prize Gold Medal currently resides in a court-controlled safe deposit box because of a legal dispute among the three surviving King children. The two sons — Dexter and Martin III — have wanted to sell the medal while their sister, Bernice, has legally objected to such a sale. The Nobel Peace Prize Bronze Medal that is on permanent display at the King Center, Hakes said, should also be viewed as an orignal rather than as a replica.