As Clayton board gets MARTA vote ‘do-over’ on Saturday, spotlight shines on Commissioner Gail Hambrick

The most popular person in Clayton County has suddenly become Commissioner Gail Hambrick.

Hambrick is seen by pro-transit advocates as the most likely swing vote who might now change her stance and favor a full-penny MARTA sales tax being put on the November ballot in Clayton County.

The Clayton County Commission is holding a specially-called board meeting at 10 a.m. on Saturday, July 5 at 112 Smith St. in Jonesboro to revisit the MARTA question. 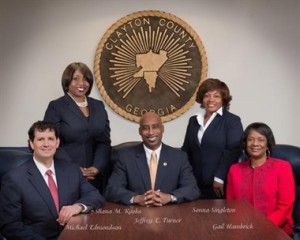 But the half-penny option was taken off the table on Wednesday morning when MARTA ‘s board members unanimously rejected Clayton’s resolution for a half penny.

MARTA officials questioned the legal soundness of that resolution as well as the fairness to its three participating governments – Fulton, DeKalb and Atlanta — which have been paying a full-penny MARTA sales tax for more than four decades.

The MARTA board the unanimously voted in favor to accept Clayton as a full partner if it were to approve a full-penny MARTA sales tax. The board took the extra step of assuring Clayton that the revenues from half of that penny would be set aside in an escrow fund to be invested in commuter rail or a high capacity transit system (another rail system or bus rapid transit) exclusively in Clayton County with no risk of it being spent in other MARTA service areas. 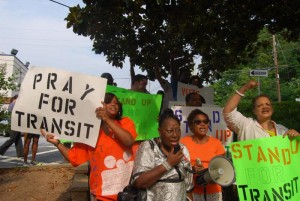 STAND UP for Transit at Tuesday’s Clayton County Commission meeting (Courtesy: STAND UP)

Clayton County has until Sunday, July 6 to vote on the MARTA question because of restrictions written into the state legislation allowing for this transit expansion.

A notice for a specially-called Clayton Commission board meeting on Saturday morning was posted on Wednesday afternoon.

Immediately multiple organizations sent out emails to their members as well as Clayton County residents urging them to attend Saturday’s meeting and to wear green to show their support for MARTA..

In the email sent out on Wednesday, the Citizens for Progressive Transit said:

The Commissioner most likely to change her mind is Gail Hambrick. Please contact her right now and forward this to anyone you think might be willing to contact her.

The email then shared Hambrick’s email address and her phone number – making it as easy as possible for pro-transit residents to let her know how they feel.

So if Hambrick all of a sudden feels as if she’s the most popular person in Clayton County, she would not be far off.

Colleen Kiernan, who pleaded with the MARTA board Wednesday to accept Clayton County’s half-penny resolution, said she is not giving up. The greatest remaining hope for transit in Clayton rests on Hambrick’s shoulders.

Kiernan hopes Hambrick remembers the promise she had made to Clayton residents during town hall meetings in the last few months.

At those meetings, Hambrick repeatedly promised residents that she would make sure they would have an opportunity to vote on the November ballot on whether they wanted MARTA to come to Clayton.

Given the actions of the last two days, the only way she can keep the promise she made to voters would be to vote in favor of a full-penny MARTA sales tax on Saturday, Kiernan said.

Pro-transit supporters are hoping that when given a choice of the status quo (no transit) versus a full-penny MARTA sales tax, Hambrick and the two other commissioners who voted for the half-penny option will ultimately decide to give Clayton residents an opportunity to go to the polls and vote MARTA up or down in November.

Hambrick, Singleton and Edmondson said they favored the half-cent option because they were concerned that an 8-cent sales tax in Clayton would put the county at a competitive disadvantage.

But transit supporters said there is another way to look at a one-cent MARTA sales tax. A penny MARTA sales tax is expected to generate about $46 million a year.

On Tuesday night during the public comment period, retired state Rep. Roberta Abdul-Salaam, founder and president of the Friends of Clayton Transit Coalition, reminded the Clayton commissioners that 49 percent of the MARTA sales tax would be generated out of Hartsfield-Jackson International Airport.

That means that nearly half of the sales tax would be paid for by people who are just traveling through the city rather than by Clayton County residents, she said.

And by providing transit connections for Clayton residents to reach jobs at Hartsfield-Jackson or attend Clayton State University or reach other key activity centers , Abdul-Salaam said joining MARTA would help improve the county’s economic competitiveness and provide new opportunities for its residents.

Between now and Saturday, other political levers are being pulled. If a MARTA referendum is on Clayton’s ballot in November, it is expected to attract a higher turn-out of Democratic voters. (Read Tom Baxter’s piece).

That, in turn, could be a significant boost for Democratic candidates seeking statewide offices.

So Hambrick shouldn’t be surprised if all of a sudden she finds herself to be the new darling of the state Democratic Party – at least until she casts her vote on Saturday morning.