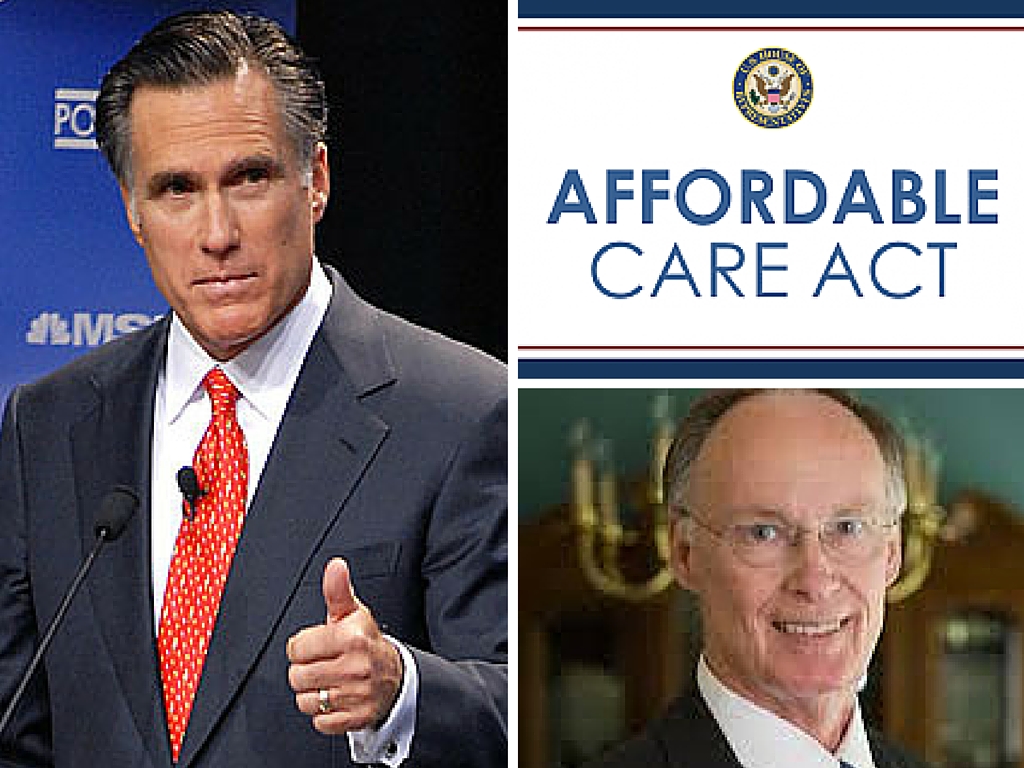 Paying tribute to a departed friend last week, Mitt Romney stumbled into the sort of gotcha moment that causes former supporters of the 2012 Republican standard-bearer to flinch.

Realizing he had trampled into a sacred cow, Romney quick backtracked and issued a standardized denunciation of Obamacare. But Romney is not alone in his gotcha.

“I was personally against the Affordable Care Act… But we lost, folks,” Alabama Gov. Robert Bentley said recently in a speech to a group of seniors.  “We lost. And we lost in court. So what we have to do now is move past that, take the resources we have available and try to improve the quality of life for the people of Alabama and that’s exactly what I’m going to do.”

Pressed later to say whether he was moving toward accepting the Medicaid expansion at the heart of the Affordable Care Act, Bentley gave a response that is the perfect reflection of Republican ambivalence on this subject:

“You know I wouldn’t say nudging toward it,” said Bentley. “But we are certainly looking at that; not right now. We are not at that stage right now.”

That’s the picture from the hinterlands, where a collapsing rural healthcare system and a disproportionate share of the uninsured are making it progressively harder to hold the line on the Medicaid expansion. Mitt Romney said no more than the truth: without a movement toward something like the Affordable Care Act, a lot more people today would be without health insurance. Those who still aren’t tend to be in states which have held the line against this movement, riddled with problems though it may be.

It’s another world in Washington, whether the battle over healthcare involves no nudging, but a never-ending clash between political absolutes. The House has passed yet another Obamacare repeal measure, but it is facing resistance from conservatives in the Senate, including Ted Cruz, who say it doesn’t repeal it enough.  The Pacific Legal Foundation filed yet another appeal with the U.S. Supreme Court Monday, seeking a total reversal of the law, but its prospects are viewed as dim.

These days, it’s the governor of Alabama saying it’s time to move past a lost cause, and people in Washington still invested in total resistance.

The Affordable Care Act still has a lot of problems, but the result of all this frustrated resistance at the top is that the very limited amount of tinkering being done with it has been in the form of the various “private option” schemes put forth by Republican governors, very often in the defiance of their Republican legislatures, to gain access to expanded federal Medicaid funds.

Presidential candidate and retired neurosurgeon Ben Carson had his own gotcha moment last week, attempting to explain some of his comments about supplanting the current Medicare and Medicaid system.

“That’s the old plan. That’s been gone for several months now,” he said when asked about a detail in his proposal.

“I’m not a politician so I don’t say that because I thought this a while ago… that I can’t change my mind,” Carson elaborated.

He may have no fully formed idea what to do about health care, but Carson’s honesty — that he does not yet completely know what he’s talking about — is a refreshing contrast from those who have calcified into a formulaic and increasingly meaningless effort to completely undo what has had five years to take root. One approach can’t be said to be any nuttier than the other.

Democrats plan to introduce a Medicaid expansion bill in Georgia this year, but giving the legislature authority on this issue virtually insures that nothing will be done. But that doesn’t mean big changes aren’t in store for healthcare in the state. In a recent column in Georgia Health News,  Dr. Deep Shah argues that the recently proposed Anthem-Cigna and Aetna-Humana mergers stand to have an outsized impact on Georgia.

“Combined with recent hospital mergers and acquisitions, the creation of these new insurance powerhouses would leave our community’s health in the hands of an oligopoly,” he writes. An oligopoly, and a legislature.

Previous Article
The Millennial Donor Perspective – Engage Me!
Next Article
A tribute to actress Maureen O’Hara (1920-2015)