The Atlanta region has had an unusual relationship with Chris Leinberger, a real estate developer who is an astute observer of cities and metropolitan areas.

It was Leinberger who back in the 1990s that Atlanta was the fastest growing human settlement in the history of the world in terms of the amount of acres being consumed by its growing population.

“You have been the poster child of sprawl,” Leinberger was fond of telling Atlantans over the past few years. “You used to be Hot’lanta. Hot’lanta is no longer hot.” 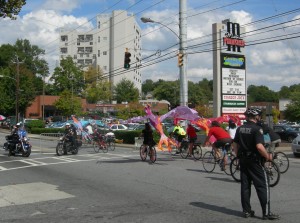 Leinberger had been one of the biggest proponents for metro Atlanta to invest in public transit and the one percent regional transportation sales tax referendum that failed on July 31, 2012. He argued that for Atlanta to be competitive in the new economy, it had to invest in alternative modes of transportation.

At the time, Leinberger said Atlanta had a dearth of walkable urban places (his studies at the time estimated there were seven) and an overabundance of drivable suburban places.

But the market was demanding more and more walkable communities — places where they did not need to get in their cars to go to work, shop, play, sleep, worship and enjoy life and the outdoors. 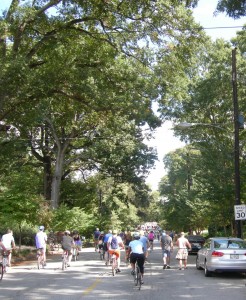 Over the past year, Leinberger, a senior fellow with the Brookings Institution who also is a distinguished scholar at George Washington University’s School of Business, has been taking a deeper look at Atlanta and its walkable communities.

“It shocked me that this much walkable activity was taking place,” Leinberger said, adding that since 2008 “60 percent of all development delivered to the market took place” in existing or emerging walkable urban areas.

In all, the study identified 27 existing walkable areas in metro Atlanta — most of them within the City of Atlanta — including Midtown, Buckhead, Lindbergh, Inman Park, Atlanta University Center, Sweet Auburn, and Georgia Tech. 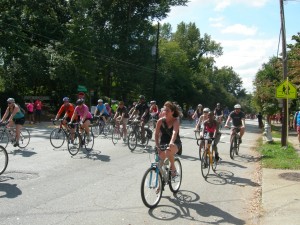 The emerging walkable urban places — or WalkUps — include North Point, Town Center, Perimeter West at 400, Doraville, Brookhaven and Hapeville among others.

There also is a third category called “potential WalkUps,” and they include Kensington Station, Turner Field, Ft. McPherson, College Park, Serenbe, and East Windward among others.

The point Leinberger made during several presentations on Thursday, Oct. 3 is that Atlanta has changed and is changing from the land-grabbing metropolis of the 1990s to a more urban environment in response to market demand.

“We have seen the end of sprawl in Atlanta,” Leinberger said definitively. “The suburbs are not dead. This is the urbanization of the suburbs.”

Leinberger has been a truth sayer for the Atlanta region — one who has held great sway on how we view ourselves. 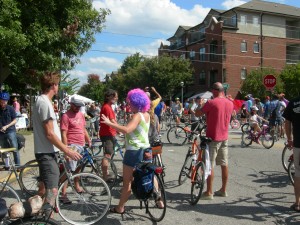 At the end of the bicycle parade on Highland Avenue

What makes his observations so powerful is that he backs them up with data. How did he make the claim we were the poster child of sprawl? “For every 1 percent of population growth, you had 8 percent land consumption,” Leinberger said.

And what about now?

The shift in land use also has tremendous implications for the future of our transportation systems. 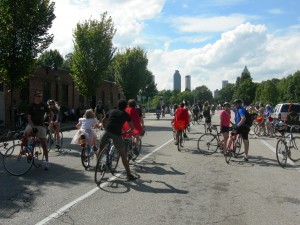 Cyclists head towards Boulevard with downtown skyline in background

In the Leinberger report — The WalkUP Wake-Up Call: Atlanta — that was released last week, a key message was how our region needs to re-invest in transit.

“Metropolitan Atlanta has been under-investing in the rail transit transportation infrastructure that greatly assists the walkable urban development the market and economy is now demanding,” the report stated. “Investing in rail transit in the early 21st century is as important as building of freeways in the 1960s and 1970s was for the economic growth of the Atlanta region 50 years ago.”

As Leinberger has told us, these are not just ways to make Atlanta a prettier and more attractive city. Creating walkable urban places will make Atlanta — both inside and outside I-285 — an economically viable region for generations to come.

“I’ve been saying you ain’t hot anymore,” Leinberger said. “You’ve got the potential to be hot again.”

Jim Durrett, executive director of the Buckhead Community Improvement District who participated in the Leinberger study, was walking along Virginia Avenue Sunday afternoon during the Atlanta Streets Alive event when it was closed off to cars and turned over to pedestrians and human-powered vehicles — bicycles, skateboards, wagons, strollers…

As he walked by with a really big smile on his face, Durrett said: “If we’re not careful, Atlanta will become a really cool city.”