Few occasions are as uplifting as those when a city can dedicate a splendid new park for its residents.

That air of celebration was readily apparent at the opening of the Historic Fourth Ward Park on Saturday, June 18.

As in all successful endeavors, many people deservedly are given credit for their roles in bringing the park to life — beginning with the vision of community activist Bill Eisenhauer.

The park is an amenity with multiple functions — the 2-acre lake serves as a storm water retention basin, helping prevent flooding in a far more environmentally attractive (and cheaper) way than buried tunnels; the park becomes a focal point for the rejuvenating community; and it is one of many planned emeralds along Atlanta’s emerging BeltLine green necklace. 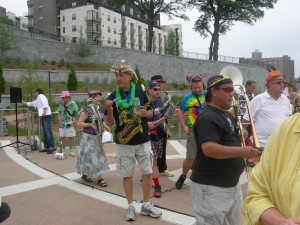 The opening is an opportune time to step back and reflect where we’ve been and where we’re headed.

While the city is weighed down by today’s tight budget woes, the Historic Fourth Ward Park serves as a wonderful reminder of the importance in investing in green space, trails and parks.

It is fair to say that the park would not exist today had it not been for many organizations, including the Trust for Public Land embarking on an aggressive strategy in 2004 to buy as much land along the BeltLine as possible.

In all, the TPL’s Georgia chapter acquired 83 acres in 34 parcels for $47.4 million for eight new or expanded parks along the BeltLine. TPL acquired more $13 million in land for the Historic Fourth Ward Park, securing 60 percent of its 17 acres — buying the first parcel in 2005. 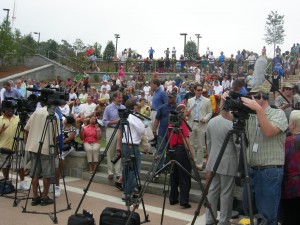 Crowd gathers for the opening of Historic Fourth Ward Park

Helen Tapp, director of TPL’s Georgia chapter, said it is remarkable that the multi-million park has been developed in just six years.

“One reason is because TPL had the foresight and courage and resources to step in as a national organization,” Tapp said. “We recognized that this was a truly transformative vision. You had to have the land assembled before you could move forward. Being able to use TPL’s national line of credit was really critical in acquiring the land. We have been committed to selling the property to the city at our cost. We were basically providing bridge financing for the city.” 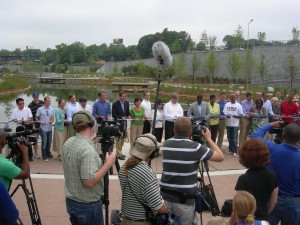 Dignitaries gather to cut the ribbon

But as in any massive undertaking, there are many ways to view the same project. TPL bought the land when the market was approaching its peak, stepping in before many developers and land speculators could tie up the property.

At the time, the city didn’t have a clearly-stated vision of what land it wanted for the BeltLine’s future parks, which meant that TPL was making public policy decisions by taking a pro-active role.

One key parcel — a three-quarter acre — lies directly between the Historic Fourth Ward Park and the BeltLine. The city has an option to buy that land for about $1.2 million. Meanwhile, TPL put up a new fence to prohibiting direct access from the BeltLine’s eastside trail (currently under construction) and the park.

Tapp said the fence was put up because of liability issues in case people were injured on the steep slope between the BeltLine and the park. 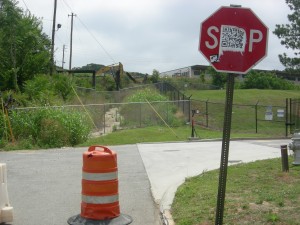 TPL owns two other parcels around the park that the city and the BeltLine have decided not to buy. One is known as the Wilmer property — a one-acre parcel covered with trees on a ridge overlooking the park.

The BeltLine folks have decided to pass on buying that land as well as another TPL parcel next to the park because of limited resources.

The Atlanta BeltLine Partnership, the private sector organization, has raised $36 million of its $60 million goal to help finance the total project — a 22-mile historic rail corridor that surrounds the central city.

“An important big step was deploy the dollars effectively that had been raised,” Somerhalder said at the park’s opening. “This is a great example of how those dollars were spent. Now the timing is right to re-energize the campaign.” 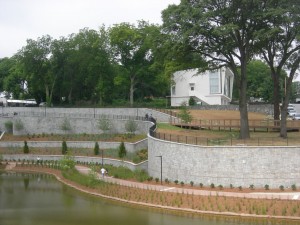 As BeltLine leaders raise more money, Somerhalder said they will be able to take advantage of other opportunities.

“Ultimately, there are lots of other things we need to do,” Somerhalder said.

The Beltline has other opportunities. For example, it currently is buying the entire southwest quadrant of the BeltLine — all four miles of the corridor — for $1.6 million.

Therein lies the inherent tension that exists in the development of the project. The costs of buying land and developing the project are higher in certain parts of the city than in others.

BeltLine leaders have to balance where they spend their limited dollars. Each part of the BeltLine must enjoy their share of the project — although the dollars may not be equally matched at least the project is evenly developed.

Ideally, the city and BeltLine leaders will be able to afford to acquire every piece of property critical to the corridor’s success — including the many parks that are being expanded or developed. 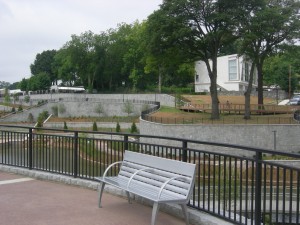 In the case of the Wilmer property, before TPL sells it to a developer who might cut down all the trees to build a project overlooking the water features of the Historic Fourth Ward Park, it would be great if the city and the BeltLine were to be given another shot at buying the property — an option of first refusal.

Mayor Reed, who has become a champion of the BeltLine in his own right, is fond of saying (as he did Saturday): “The Atlanta BeltLine is going to be built. It’s going to be finished. And it’s not going to be in 20 years.”

Although the mayor’s desire to “complete” the BeltLine is commendable, the truth is that the project — just like the City of Atlanta — will continue to evolve.

Cities are living entities — rising and falling with the tides of time.

And some days are special — especially when we give ourselves the ultimate gift — a new park that will be enjoyed for generations after we’re gone.