The Georgia Trust for Historic Preservation on Wednesday released its annual 10 “Places in Peril,” including to landmarks in Atlanta – the Ashby Street Theatre and the Atlanta Eagle and Kodak buildings in Midtown.

The 2021 list of 10 “Places in Peril” continues the Georgia Trust’s mission of saving and preserving historic landmarks throughout the state. The list spotlights buildings and locations that are most vulnerable to being demolished – by neglect or redevelopment.

“This is the Trust’s 16th annual Places in Peril list,” said Mark C. McDonald, president and CEO of the Georgia Trust. “We hope the list will continue to bring preservation solutions to Georgia’s imperiled historic resources by highlighting 10 representative sites.”

The Trust’s “Places in Peril” list is designed to raise awareness about Georgia’s significant historic, archaeological and cultural resources, including buildings, structures, districts, archaeological sites and cultural landscapes that are threatened by demolition, neglect, lack of maintenance, inappropriate development or insensitive public policy.

Through “Places in Peril,” the Trust will encourage owners and individuals, organizations and communities to employ proven preservation tools, financial resources and partnerships in order to reuse, reinvest and revitalize historic properties that are in peril.

Sites on previous years’ lists include:

The Georgia Trust, founded in 1973, works for the preservation and revitalization of state’s diverse historic resources and advocates their appreciation, protection and use.

As one of the country’s leading statewide, nonprofit preservation organizations, the Georgia Trust generates community revitalization by finding buyers for endangered properties acquired by its Revolving Fund and raises awareness of other endangered historic resources through an annual listing of Georgia’s “Places in Peril.”

Summary Information on each Places in Peril Site: 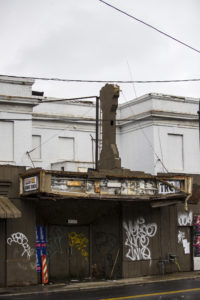 Opened in 1934, Ashby Street Theatre was one of Atlanta’s first theaters to serve the African American community. The theater was built by an all-African American construction crew, providing those workers important employment in the midst of the Great Depression. In the Jim Crow era, Ashby Street Theatre provided a space for African Americans to enjoy the latest movies in their own community without having to suffer segregated entrances and seating areas. The theater served as an anchor for the surrounding neighborhoods throughout the 1940s, 50s and 60s.

The Ashby Street Theatre has not been occupied for many years and suffers from a lack of maintenance. The original theater marquee remains intact behind plywood boards which are showing signs of wear and weathering. While the building is boarded up, the interior suffers from water damage. People experiencing homelessness have attempted to occupy the building, causing further threat and damage. Despite its continued disrepair, there is now significant development occurring all around the Ashby Street Theatre, creating an opportunity for its revitalization as a community gathering spot once again

Originally constructed as expansive private residences in 1898 and 1905 respectively, the Atlanta Eagle and Kodak Buildings reflect over a century of urban evolution and social history in the city of Atlanta. 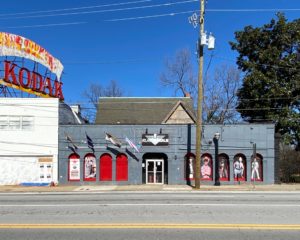 Once a prosperous residential corridor, Ponce de Leon Avenue shifted to prime commercial real estate with the growing prominence of the automobile. The Atlanta Eagle Building – altered for commercial use in 1949 – eventually became a place of prominence in the LGBTQ community, significant as a site for public social interaction.

The Kodak Building was originally constructed as an Italian Renaissance house but underwent a commercial alteration in the 1940s with the opening of Star Photo. Historically significant for its association with the rise of commercial amateur photography in the mid-20th century, it also served as the campaign headquarters of Shirley Franklin, Atlanta’s first female mayor.

Currently, the structures suffer from lack of maintenance and a direct threat of demolition. The Atlanta Eagle has recently announced plans to close due to financial hardship brought on by the pandemic. Despite both buildings being contributing properties in the Midtown National Register Historic District, the properties are highly susceptible to demolition without the addition of local preservation protections. 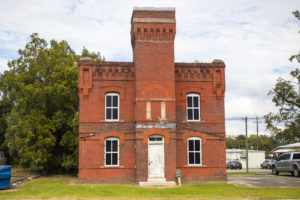 Known locally as the old “Hanging Jail,” the Blackshear City Jail is thought to be the third in a series of interior-gallows jailhouses in the South. This unique, Gothic style structure was constructed in 1894, yet the jail has never officially recorded a hanging from its gallows-like tower.

Years of neglect and lack of maintenance have taken its toll on the structure. There is interest in the building and demand for potential tours, but the current state of the building does not allow for access. 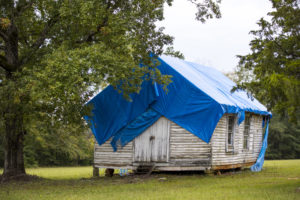 The Cherry Grove Schoolhouse is a rare surviving example of an early 20th century, rural African American school building in Georgia. Built in 1910, the one-room, wood frame building was constructed on the grounds of the Cherry Grove Baptist Church, which was founded in 1875. The schoolhouse is one of only a few remaining pre-Rosenwald African American school buildings in the state.

The schoolhouse suffers from years of neglect and lack of maintenance due to the financial realities of a small, rural congregation. A University of Georgia report in 2016 found the schoolhouse to be “in dire need of repair.” Thorough structural intervention would allow this small but significant site to be preserved. 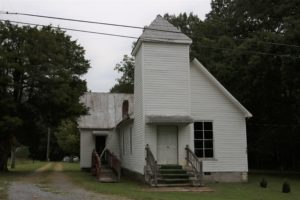 All three resources are now owned by the town of Cohutta. The current leadership in Cohutta recognizes the significance of this district; however, long-established threats—including limited resources and a dwindling population—persist. 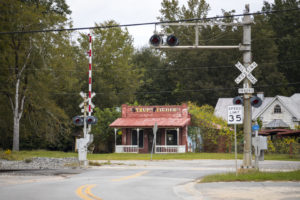 Incorporated in 1904, the town of Toomsboro primarily grew as a whistle stop town between Macon and Savannah along the Central Georgia Railroad. After the Civil War, the town developed an active downtown district which grew through its incorporation and remained active through the mid-20th century, even with a population that remained around 700. Many of the original downtown structures still exist today.

Despite its charm, many of the downtown buildings are showing deterioration. Many of the properties are held by a single owner who has not shown a willingness to invest in significant rehabilitation efforts but has shown a willingness to market the town as available for purchase. The mayor and city council wish to promote the town but also balance its history with its future by attracting preservation minded buyers sympathetic to the historic structures. 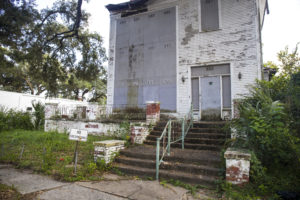 Built in 1910, the Kiah House in Savannah was the longtime residence of Dr. Calvin L. Kiah, a professor who led Savannah State College’s education department, and Virginia Kiah, a public-school teacher, artist, and curator. In their home, the couple established one of the first museums in Savannah started by African Americans in 1959. Notable visitors included Civil Rights activist Rosa Parks and artist Margaret Burroughs. The museum’s run came to an end with Virginia’s death in 2001.

Originally excluded as a contributing property from its neighborhood historic district due to its alterations, the Kiah House is a good example of how a property’s significance can be reconsidered over time. Unoccupied and in probate for nearly 20 years, the house is in an advanced state of deterioration, which has not gone unnoticed by the City. Due to the issues surrounding the probate, concerned citizens have been unable to apply for grants, conduct archaeological research, or perform any maintenance to the property. There is strong community support for the preservation and recognition of this resource, yet the house remains in danger of being lost. 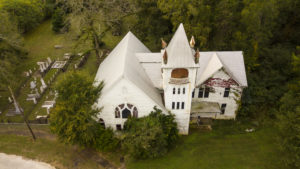 Built in 1895 and listed on the National Register of Historic Places, the Old Monticello United Methodist Church is a contributing property to the Monticello Historic District. The building was constructed for the Methodist congregation, which had grown significantly in the prior decade thanks to the ministry of Sam P. Jones, who went on to national acclaim as the “Apostle of Prohibition.”

The building has been vacant since the 1990s and suffers from neglect. It is owned by a defunct corporation, which limits the interventions that concerned local authorities can take, despite a strong desire to stabilize and rehabilitate the property to its former glory. 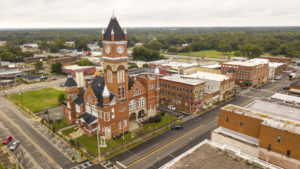 Constructed in 1892 and listed on the National Register of Historic Places, the Terrell County Courthouse stands as one of the tallest historic courthouses in Georgia and features many intricate details that reflect its architectural significance. Materials from within the state were used whenever possible for the construction.

Listed on the Georgia Trust’s inaugural Places in Peril list in 2006, the courthouse was fully rehabilitated in 2009. However, in 2018 the building suffered new damage to its roof and exterior as a result of Hurricane Michael. The court and multiple county offices have been displaced, and although the majority of the emergency repairs have been completed on the exterior, the building remains unoccupied and closed to the public as the county lacks the resources to return the building to its safe rehabilitated condition. 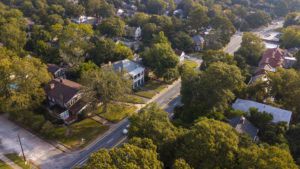 The Vineville Avenue Corridor in Macon is the main thoroughfare that anchors the Vineville Historic District. The three blocks that make up the corridor are the most intact areas of the original Vineville suburb, which featured a significant collection of late 19th and early 20th century upper-middle class residential architecture.

Most of the homes along the corridor are unoccupied and deteriorating. Some homes are candidates for commercial or professional offices, while others could still be rehabilitated as private residences. And yet, increased traffic and commercial intrusion threaten to erase the historic residential fabric of the area, turning the area commercial and negatively affecting the surrounding district.