At the people’s house, a gated community 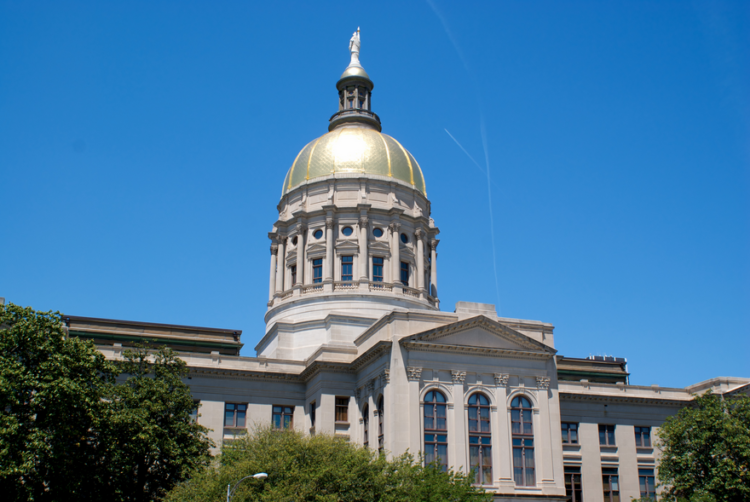 Nearly a quarter, 24.6 percent, of Georgia's lawmakers are women, according to Rutgers University.

When we last visited old Tom Watson, he had finally made too much of a nuisance of himself, with his fist raised in the air in petrified anger cheering on whatever protest happened to gather beneath him, and was about to be removed from his perch on the west side of the State Capitol.

Now he stands tucked out of sight on the far side of the plaza next to Central Presbyterian Church, back-to-back with Herman Talmadge. Maybe he’s raging at the county courthouse, or the city beyond, but nobody pays any attention to him anymore.

Meanwhile, the building Tom Watson used to guard in all his conflicted thunder is a changed place. The people’s house has become a gated community.

Where Watson’s statue, and all the historical contradictions it embodied, once stood, there for now at least is a gray, empty space reminiscent of the wrong side of the Cold War. Should anyone wish to protest anything, they are to do so in Liberty Plaza, the newly-created, fenced-off public space across the street from the east side of the Capitol. Gov. Nathan Deal’s second inauguration was to be held there also, but the weather was bad.

Many who remember the eyesore of a parking lot it replaced have praised the new space as an improvement, but it is going to be a little off-putting to the participants to practice democracy on something that looks like a miniature golf course.

While these are the most visible changes, they aren’t the most important to the denizens of the Golden Dome. That would be the big red-and-white signs that say

NOT A PUBLIC ENTRANCE
This Entrance Is Closed to the Public

in front of most of the doors through which lobbyists, reporters and the concerned public have previously passed. Except for state employees, access to the Capitol is now limited to two official and one semi-official (the new sign is still up, but not observed) entrance. The handsome stone handicapped entrance on the north side, built just a few years ago, now curves up to a door that only employees can enter.

What’s more, the building now closes at 5 p.m. Presumably this will change when the session nears a close and public meetings are being held at all hours of the day and night, but for now surprised lobbyists are being ushered out promptly at closing time.
Perhaps the worst thing one might say about the changes at the Capitol is that it looks like liberals did it. The nanny state, political correctness — all that stuff that gets conservative Republican in a lather have been institutionalized under the Golden Dome. But it is they who have done all this unto themselves.

The New York Times complained editorially last year when the Georgia bill which allowed guns to be carried in many public places exempted government buildings with security checkpoints, such as the Capitol.

But either because the Capitol wasn’t secure enough, or, as has been speculated, all the hassle is payback for those who pushed the gun bill so ardently last year, the exemption has come with a price. The other day it took about 10 minutes to get into the building at the western entrance. On some of the days when big groups come for their once-a-year lobbying appearances, it’s going to be a full-scale zoo.

There’s no question that acts of terrorism, particularly the assault last October on the Canadian Parliament in Ottawa, have sharpened awareness of the vulnerability of government buildings which the public frequents.

But the Capitol is a building with its own life cycle. It sits nearly dormant through a good part of the year, its inhabitants invisible until you’ve opened a door and wandered through a maze of cubby holes and offices. Then as the spring nears it explodes with life, and the empty halls and rotundas are filled to the brim.

Whether the new security requirements can accommodate the complicated ecology of that life cycle will be one of the interesting environmental questions of this session.

Note: We asked the information office at the Georgia Department of Public Safety about the connection between the gun bill and tightened security at the Capitol, and got this reply:

Last year’s gun bill (H.B. 60) has no part in the increased security around the State Capitol and surrounding state buildings.

DPS is tasked with ensuring the safety and security of the Legislators, state employees and visitors to the Capitol Hill complex.

Considering the potential threats around the world, such as the Canadian Parliament incident, DPS has reviewed security procedures at the Capitol and implemented increased security measures to reduce the probability of potential threats to the people within the Capitol and surrounding state buildings. Our hope is that security procedures are expeditious, customer friendly, and ultimately, effective.

There is actually one more door open to the public than there was last year. New security procedures deny access to the inside of the building after 5 pm unless legislative committees are scheduled to meet after 5 pm., otherwise the doors are secured at that time.