At war with terror, on the front lines of comedy 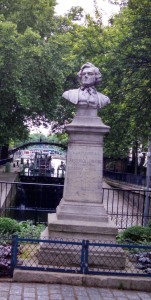 1800-1876. A favorite of the boisterous crowds who frequented the theaters near there in the mid-19th Century, Lemaitre was one of the colorful characters portrayed in the film “Children of Paradise.”

Hopefully proper homage was paid to Lamaitre’s memory by the demonstrators on Sunday, because the belly laugh is as much a French value as freedom of expression, and it was both which were targeted last week.

We live in a time when comedy has become truly dangerous, when aging leftie cartoonists can be marked for execution for insulting the Prophet Mohammed and a cyberattack launched over Kim Jong Un’s treatment in a yuck-it-up movie.

Other, darker issues hang over the story of last week’s terrorist attacks in Paris. When the great outpourings of solidarity have ended, France still must come to grips with the social inequities which are the incubators of home-grown, foreign-directed terror. But it’s notable that when terrorists struck there, they didn’t walk into a convocation of the Front National, which is gaining ground with its anti-immigrant policies, and blow away a bunch of politicians. They opened fire on the editorial meeting of a small satirical magazine.

We tend to miss how much symbolism matters to the perpetrators of these attacks, whether it be flying airliners into the Twin Towers, or the dumping onto the internet of Sony’s internal internet communications. Their crimes have a cunning showiness, divorced from any tactical logic, like those of villains in a Batman comic. That makes laughter explosive.

Some of the same people who wanted to rename French fries “freedom fries” after the French refused to join the coalition invading Iraq in 2003 are now criticizing the Obama administration because no top-ranking U.S. official joined the chorus line of national leaders who participated in the historic demonstration Sunday.

In retrospect, the French were quite sensible in staying out of Iraq, an entanglement which was not at all in their national interest. They were more solidly focused on the threat posed by Islamic radicalism than we were, and since then have combated its spread with an important military intervention in Mali.

And despite its own second-guessing on the subject, the administration also may have been sensible to let Sunday’s outpouring be a demonstration by the rest of the terrorist-targeted world, not overshadowed by us for a change. Demonstrations like the one held here in Atlanta may have been the more appropriate response.

Throughout this century the United States has tried to exert the same leadership role in the War on Terrorism that it played on the Cold War, with only limited success. The countries most directly threatened by jihadist terrorism should have a stronger leadership role in the alliance opposing it. This past weekend may have marked a point at which that consensus began to emerge.

Not the least of the newly vocal opponents of jihadism to emerge last week, not in the streets but in one of its customary online manifestos, was the shadowy hacker group Anonymous, which announced it was going to begin attacking the websites and twitter accounts of jihadist groups.

Straight out of Batman, right? A gaggle of cyberpunks couldn’t accomplish something that escaped the attention of U.S. intelligence, right? Remember, these are different times, when the cartoonist’s pen provokes murder, and points to the range of the possible.

Previous Article
The only girl in a room of coders
Next Article
Underground ATL: Ga Tech grad shows time right for redevelopment