Second part of a two-part series on current plans for the Atlanta BeltLine. Looking at the proposed phases of the Atlanta Streetcar

It was Friday, Nov. 15, 2002 at the annual meeting of the Midtown Alliance when guest speaker Andres Duany, the father of new urbanism, challenged Atlanta.

“Peachtree Street was created by the Streetcar,” Duany told the hundreds sitting at the Fox Theatre. “If you restore that pattern, it will restore the area immediately.”

Duany went on to say that Atlanta was unique because of Peachtree Street — no other city has such a well-recognized commercial corridor only a couple of blocks away from “pastoral” neighborhoods.

That simple challenge sparked a decade-long effort by hundreds of Atlanta’s civic and business leaders to establish a streetcar up and down our city’s signature street. Because the city would need a maintenance area to store streetcars, planners coupled the plans for the Peachtree Streetcar with an east-west streetcar that would connect Centennial Olympic Park with the King Center — with the maintenance yard under the Downtown Connector.

An initial federal grant to build the entire “shovel ready” Atlanta Streetcar including Peachtree was turned down, but a second application to begin with just the east-west line was approved. It is now under construction and scheduled to open this summer.

But in the last couple of years, the City of Atlanta has turned over its streetcar transportation planning function to the Atlanta BeltLine. That has led to the Peachtree Streetcar being placed at the very bottom of the priority list. 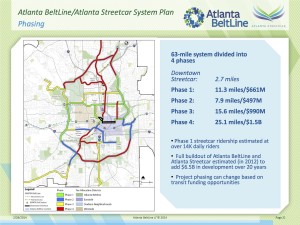 Phases of Streetcar plans: Green – Phase 1; Blue – Phase 2, Yellow – Phase 3, Red – Phase 4. The Peachtree Streetcar is in Phase 4. The Black lines in the middle is what is currently under construction – click to enlarge (Source: Atlanta BeltLine Inc.)

In place of the Peachtree Streetcar, there are a number of streetcar projects the Atlanta BeltLine Streetcar System Plan has put in the first phase.

There’s a third phase that would cost $990 million. And finally, there’s the fourth phase, which includes a hodge-podge of difficult to build transit projects, and that phase includes the Peachtree Streetcar — which has already been labeled “shovel ready.” Phase four’s cost: $1.5 billion.

The BeltLine’s projected timing estimates that it would take at least 20 years to complete all four phases, and they would cost a total of $3.65 billion.

So how did the Peachtree Streetcar go from being the inspiration of Atlanta’s streetcar network to getting buried under the BeltLine’s plans?

Nate Conable, director of transit and transportation for the Atlanta BeltLine, explained that each project was evaluated and ranked by using five guiding principles — project readiness, practicality and ridership, equity, financial options and development impact. 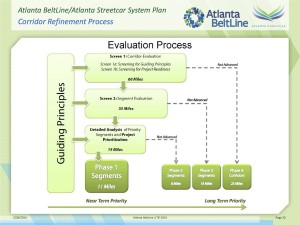 In going over the charts that ranked each project, little detailed data (ridership numbers, etc.) was available for the projects that were in Phase 3 and 4 — so the Peachtree Streetcar did not get a thorough, in-depth evaluation.

At one point I asked Conable the following question: Shouldn’t the next phase of the streetcar be built in the corridor where it can be most successful?

Conable said that was not the BeltLine’s guiding principle.

So we may have a real philosophical difference of opinion.

I believe that streetcar lines must first be built in corridors where they can prove their value — where they can be attract the most riders and stimulate lively urban developments that encourage walkability.

A Peachtree Streetcar could help create a seamless central commercial spine that would rival any other business-retail-residential district in the region.

If the first streetcar lines are popular and successful, then their success will create a demand and desire for more streetcars throughout the city — including lines that serve the BeltLine.

But the opposite is also true.

But first members of the public — including business, civic and community leaders who have been counting on riding a Peachtree Streetcar in their lifetime — need to know what’s at stake. More importantly, they need to be part of a citywide conversation that weighs in on what our transit priorities should be.

Last week, the first part of the two part series: Looking at the Southwest leg of the Atlanta BeltLine corridor.