Part of the 425 Chappell Road site as it appeared in May 2021. Credit: Atlanta BeltLine Inc.

Atlanta BeltLine Inc. says it will spend the next 18 months coming up with a community-informed plan for the 31-acre Bankhead property it recently bought to catch up on its unfulfilled promises to create affordable housing. How affordable “affordable” might be remains a key question. 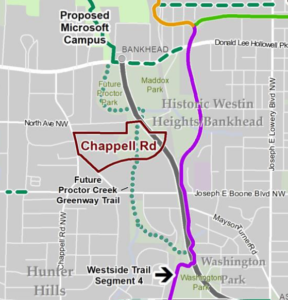 The 425 Chappell Road site as outlined in red on an Atlanta BeltLine Inc. map.

The timeline and open-to-ideas approach to 425 Chappell Road were announced in a June 28 virtual meeting, the first since ABI’s $25.6 million purchase of the site from a housing developer was announced in May. Many attendees obliged with early ideas, with themes of deeply affordable and lower-density housing, preserving local culture, and providing basic amenities like a grocery store or pharmacy.

The huge site was formerly occupied by an apartment complex and such industrial uses as an asphalt plant and a garage — though tests show no signs of pollution, ABI official said. The site is roughly bounded by Chappell, Mayson Turner Road, parts of Kennesaw Drive and North Avenue, and a CSX railroad line. Proctor Creek runs north-south through the property. It’s a lot of elbow room for possibilities.

“ABI doesn’t have a plan,” said Beth McMillan, a vice president of planning at the organization that is building the Atlanta BeltLine trail, transit and park system. “… So we have a blank piece of paper and we hope that you will help us determine what the Atlanta BeltLine Inc. plan will be.” 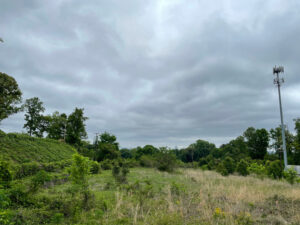 Part of the 425 Chappell Road site as it appeared in May 2021. Credit: Atlanta BeltLine Inc.

Of course, the paper isn’t literally blank. A big priority is ABI’s self-set goals for creating affordable housing and boosting independent businesses — measures intended to help undo some of its own gentrification effects as it plans a nearby segment of the BeltLine’s Westside Trail.

The property is about a third of a mile from the 90-acre complex Microsoft intends to build at Donald Lee Hollowell Parkway and Gary Avenue, and which is widely viewed as a gentrification bomb, despite promises of including affordable housing. District 9 City Councilmember Dustin Hillis said at the meeting that he and at-large Councilmember Matt Westmoreland convinced housing developer Brock Built to sell to ABI due to Microsoft’s shakeup of the local market and the need for affordable housing. ABI says Brock Built sold for 30% less than the appraised value.

That’s still a hefty sum that ABI paid for the property, a possible development constraint that was not discussed. Also not delved into was ABI’s City Council-approved master plan for the area, the 2020 update of which includes a call for midrise multifamily and mixed-use structures on the site. 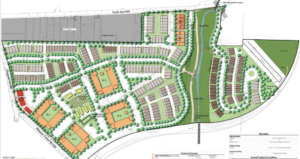 The site plan for Brock Built’s now-dead redevelopment plan for the Chappell Road property. ABI says it is not bound to use any part of the plan, but wanted to respect the community input into its design. Credit: Atlanta BeltLine Inc.

There’s also the existing zoning, approved last year, for Brock Built’s plan for a massive residential project of townhomes and midrise apartment buildings, along with about 10,000 square feet of commercial space. “The Brock plan is not the ABI plan,” said McMillan, explaining that ABI is not required to do anything similar.

But ABI officials say they want to at least acknowledge and respect the community input that so recently went into that Brock Built plan. Among those community gains were pledges the mini-neighborhood would not be gated and that it would include a community garden and a creek-side trail.

And ABI does have a few ideas, like the potential of Proctor Creek. “It is a great opportunity to not only restore that creek, but also enhance connectivity to additional parks on the Proctor Creek Trail,” both existing and planned, said ABI real estate director Dave Pierce. That Proctor Creek Trail is already planned to run through the site; it also has sparked local gentrification concerns.

Several public comments were directed at the definition of affordable. Following typical federal standards, ABI is basing its definition on the metro area’s median income (AMI), which is vastly higher than local numbers; ABI calculates it as about $82,700 a year for a family of four. ABI officials said its definition of “affordable” is typically 60% of AMI or lower for rental units and 80% to 120% of AMI for ownership housing.

Kelvin Collins, ABI’s vice president of economic development, added that the organization “can’t build our way out” of the affordability crisis, but also has to create local jobs with living wages and make space for “local, independent, small businesses.” 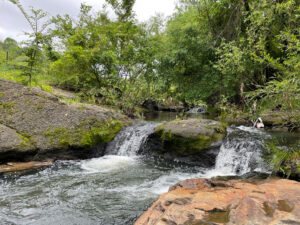 A view of Proctor Creek flowing through the Chappell Road site in May 2021. Credit: Atlanta BeltLine Inc.

Brooklyn Dorsey, one of the public commenters, said the numbers should be more like 30% of AMI, “which is true affordable housing” — especially given that the city demolished thousands of units of public housing in the area. He called for lower-density, walkable housing developments and something to memorialize the local history of “legacy residents.”

Dominique Williams said she was pushed out of Atlanta to McDonough “and it’s really weird out here,” but moving back is hard as the city fills up with “a lot of transplants who are capitalizing off our culture.” Like some other comments, she expressed distrust of ABI’s intent and outcomes. “When I hear ‘BeltLine,’ I hear gentrification and I hear exclusion,” she said.

ABI officials said they will continue gathering public input, including through a “stakeholder committee” to be formed, for roughly the next year. ABI aims to have a draft of a request for proposals ready around mid-2022 and issue the RFP to developers in late 2022 or early 2023.