For years, officials with the Atlanta BeltLine have conducted tours of the 22-mile circular corridor to give the general public insight on how the project would reshape the city.

The vision is multi-dimensional: parks; transit; residential, retail and office development; multipurpose trails; an arts and cultural ring and an arboretum.

On Friday, Sept. 30, a different kind of tour took place. Brian Leary, president and CEO of Atlanta BeltLine Inc., took a tour of “VIPs” to show how the project would connect the central part of the city with the rest of the region.

Today, the Atlanta BeltLine is at a critical juncture. By October 15, the Atlanta Regional Transportation Roundtable will adopt a list of projects that would be financed by a one-cent sales tax in the 10-county metro region if approved by voters.

In the draft project list of the Transportation Investment Act, $602 million (or 10 percent of the potential tax dollars) has been allocated for the Atlanta BeltLine.

Atlanta Mayor Kasim Reed has exerted his political muscle to make sure funding for the BeltLine remains intact. The BeltLine has received considerable opposition from the mayors in North Fulton who have questioned whether the BeltLine is really a regional transportation project.

“I’m not going to play political games in this space to allow people to lie,” an angry Mayor Reed said in a recent meeting. He said the mayors were trying to “sow discord,” and that he “wasn’t going to stand for that…. This kind of politics is not going to occur around me.”

Reed said the BeltLine has been viewed as a regional project for years, and it outperforms almost every other transit project that been proposed. The BeltLine funding would include two major portions of the loop as well as several cross-town links that would connect into several MARTA stations.

Leary reiterated that point on the tour. “It will have cross-town connections and not only the loop,” Leary said. “It’s been a regional project since 2004.” 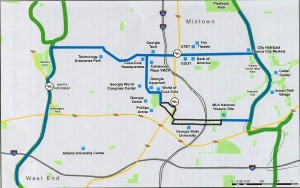 A map showing the interconnectivity of the BeltLine proposal (Courtesy: City of Atlanta)

The key to the map.

The Friday tour actually followed the route of how the BeltLine project would connect with the downtown streetcar that soon will be under construction. The tour then showed how the BeltLine streetcar would travel up Luckie Street and go west towards Maddox Park and the Bellwood Quarry.

The BeltLine streetcar would also travel from North Avenue in front of Ponce City Market, which used to City Hall East and was built as Sears’ regional distribution center in the 1920s. There it would reconnect with the Northeast leg of the BeltLine that would go from Piedmont Park south to Edgewood Avenue.

The people on the bus enjoyed peering into the looking glass of what Atlanta could become with a resurgence of streetcars reconnecting several of the city’s major destinations and employment centers. 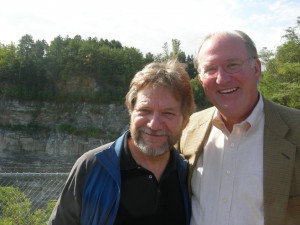 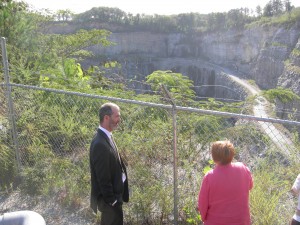 Atlanta BeltLine's Nate Conable and Anna Foote, a board member of the Atlanta Development Authority, look over the Bellwood Quarry

When the bus stopped at the Bellwood Quarry, the people on the tour were amazed by its magnitude. The possibility of a new 300 acre park in Atlanta began to stir their imagination as they soaked in the fall’s sun. 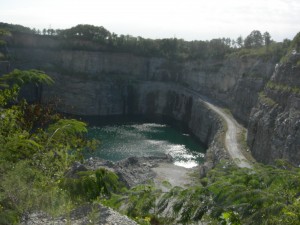 A view of the Bellwood Quarry

When asked whether the BeltLine would survive the wheeling and dealing that is underway as the roundtable puts together a final project list, Leary was optimistic.

“We feel fairly confident based on the mayor’s leadership,” Leary said. “We think we have the funding intact for the BeltLine.”

Several route decisions still are being made. For example, should it use North Avenue, Ponce de Leon or 10th Street for its east-west connection? “We will let the analysis drive the decision on that,” Leary said. 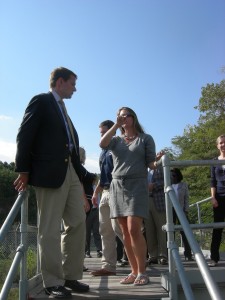 BeltLine officials were asked about the downtown multimodal station and the future of commuter rail. So far, neither of those projects are slated to receive funding from the proposed sales tax.

Leary said that Clayton County Chairman Eldrin Bell has filed an amendment to include funding for commuter rail.

For whatever reason, Mayor Reed has not championed the downtown multimodal station or commuter rail from Five Points to Griffin. Had he made sure some funding had been set aside for those projects, he would have had a stronger argument that he was supporting a regional transit system.

Chances are that some minimal funding will be put in place to keep those projects alive.

Meanwhile, plans for the BeltLine are moving forward. On Saturday night, Jamestown threw a big party for its Ponce City Market development where Francine Reed, Shawn Mullins and the Indigo Girls performed outdoors in the chilly air. 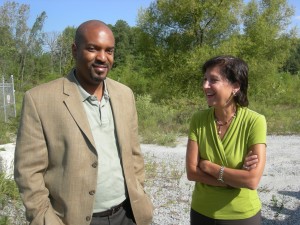 Having the old Sears building filled with people and activities further reinforced the vision of a thriving in-town community connected by parks, trails and rails.

Ryan Gravel, who was the inspiration for the BeltLine when he did his Master’s thesis at Georgia Tech, was enjoying the Ponce Party. Gravel beamed with pride over the progress that had been made in the past decade.

Amazingly, the BeltLine has been adopted by several champions. Former Atlanta City Council President Cathy Woolard carried the flag, and then she convinced former Atlanta Mayor Shirley Franklin to champion the project. Now Mayor Reed has become a believer — making it one of his administration’s top priorities.

Then Leary said “full-blown construction” would be underway in 2013.

Previous Article
Future of transit governance remains a great unknown
Next Article
After 17 years as lauded CEO, AHA’s Renee Glover is leaving because of pressure from city