At the Atlanta Regional Commission’s State of the Region breakfast on Nov. 1, national urban observer Chris Leinberger declared the end of sprawl in metro Atlanta.

Sixty percent of development in the last four years had gravitated towards walkable urban places — primarily in the City of Atlanta close to transit. Walkable town centers in the suburbs also could expect future investment, Leinberger said as he repeated: “Sprawl is over.”

Tad Leithead, chairman of the Atlanta Regional Commission, released the results of a new “Atlanta Speaks” survey of residents from throughout the region.

“A majority of our residents believe in transit,” Leithead said, adding that they also believed in the “redevelopment of older areas in our region.”

While Leithead was standing on stage as a regional leader, the other organization that he chairs — the Cumberland Community Improvement District — was working on a grand plan to lure the Atlanta Braves from the heart of the region to the auto-dependent Cobb County area near the intersection of I-75 and I-285.

That’s Atlanta for you. One step forward. Two steps back.

The Braves will be leaving Turner Field, a perfectly good stadium with existing infrastructure that’s about a mile away from the MARTA rail line, for a 60-acre site that currently is filled with trees — most of which will have to be cut down to make way for a $672 million stadium with parking and a major mixed-use development.

By making the decision to move to Cobb County, the Atlanta Braves are going against the flow of just about every other baseball team in the country. In recent years, baseball teams have been moving closer to the center of metro areas instead of farther out. 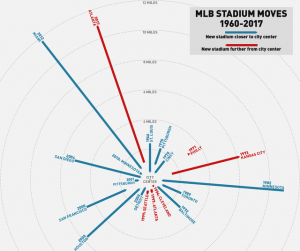 Note to readers: I have included a map showing the moves of baseball teams from 1960 that was emailed to me.  Georgia Tech professor Mike Dobbins referred me to the origin of the graphic.  Here is the link to the source of that map.

Those moves are tracking the national trends of more and more people — especially younger residents — moving back into the city.

As Leinberger said, Atlanta also is experiencing a realignment in its growth patterns — from being the poster child of sprawl to becoming a city that is investing in walkable urban communities.

When a baseball team considers where it should build a new stadium, it should not only think about the present but about the future. Where is the best place long-term for a team to invest in the future?

The Atlanta region — whether it be the Urban Land Institute, the Livable Communities Coalition, the Metro Atlanta Chamber, the Atlanta Regional Commission or the Georgia Regional Transportation Commission — have all stated that we need to link transportation with land use.

In other words, when we develop major employment and activity centers, we need to connect them with adequate transportation systems, including transit.

Despite Cobb’s desire to attract a major attraction like a Braves stadium, it is disturbing to hear the anti-transit rhetoric coming from Cobb County residents — reminiscent of the people who voiced objections to MARTA in 1971.

The last issue is that of regionalism. Regional leaders are good at giving lip service to regionalism — how we can work together as a united region for the greater good.

But how regionally-spirited were the leaders in Cobb County when they engaged in a secret effort to steal the Atlanta Braves from the City of Atlanta and Turner Field?

If we really are regionally-minded, we would ask what location would be best place in the region for the Atlanta Braves to play baseball. Among the issues that would need to be considered should be what is the most prudent fiscal decision?

What is best environmentally sustainable decision? What is the best location that is accessible to people from every part of the region using all modes of transportation?

What location would be the most equitable so that people of all income groups could both attend the games and work at the stadium?

Before the region makes such a major decision, all those questions should be answered — for the good of the whole region — and not just one county — now and in the future.