Despite the results on the scoreboard, the Atlanta Braves actually won this weekend.

When that game moved on to another city, the Atlanta Braves believed Atlanta should have an annual tribute to recognize its own Civil Rights heritage.

The highlight of the weekend was on Friday when the National Center for Civil and Human Rights and the Atlanta Braves held a luncheon when four living legends received Hank Aaron Champion for Justice Awards. 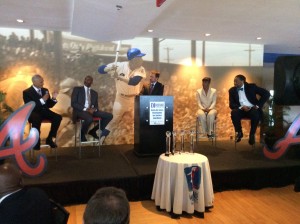 The three athletes and the Rev. Vivian all said that the obstacles of racism and prejudice have improved during their lifetimes. But they also recognize there’s still a lot more to do.

“I think we’ve got to get up every day ready for battle,” Joe Barry Carroll said. “I don’t think whatever issues are going to go away.” 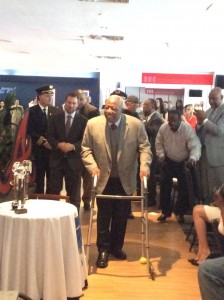 Hank Aaron surprises the luncheon crowd when he enters the room

Rev. Vivian agreed that racism hasn’t gone away. The recent controversy with comments made by Shelly Sterling, owner of the L.A. Clippers, demonstrates that minds still need to be changed.

Joyner-Kersee and Moses said that education was key to continuing to make improvements.

“When it comes to Civil Rights and race, we all know we have a responsibility,” Edwin Moses said. “It’s incumbent on all of us to make a difference. My 18-year-old son, a mixed kid, is about to go to college. I’ve told him, if you see ugliness, you’ve got to stand up, no matter what. If its about someone who is gay, you have to stand up and take a position. That’s what we all have to do. It’s about doing the right thing.” 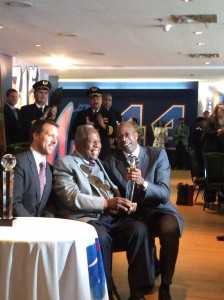 The conversation was moderated by Doug Shipman, CEO of the Center for Civil and Human Rights, which will have its soft opening at the end of this month and its grand opening in June.

Shipman said it was inspiring for him to hear and see from the four leaders close up “and see how incredible they really are.”

At that point, Bill Bartholomay took to the podium. Bartholomay, chairman emeritus of the Atlanta Braves, bought a 90 percent stake in the Milwaukee Braves in November 1962. It was Bartholomay who was instrumental in getting the Braves to move to Atlanta in 1966 – a daring move for a city that had never had a Major League Baseball team before.

Bartholomay’s duty at the Friday lunch was to introduce the Hank Aaron Championship for Justice awards.

He started off by saying that Hank Aaron broke Babe Ruth’s homerun record “the right way,” an obvious slap at players who used steroids to boost their performance. The Braves are celebrating the 40th anniversary of that feat this year.

“He’s special, and he’s just as special off the field. There’s only one of the Braves who stands out above all,” Bartholomay said, speaking of Aaron and what he has done with his wife, Billye, with their Chasing the Dream Foundation. “He’s a very, very special person.”

At that point, Aaron came walking with the help of a walker from the room behind the stage – surprising the luncheon crowd, which immediately rose to their feet.

It was clear that for the Atlanta Braves, its Civil Rights heritage is embodied primarily in one person — Hank Aaron.

Shipman was asked what would happen to the Hank Aaron Championship for Justice awards luncheon in future years, assuming the Atlanta Braves would be moving to Cobb County after a couple of years. 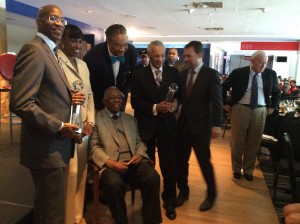 “Starting next year, we’ll be holding the luncheon at the Center,” Shipman said. “We would have held it there this year, but it just wasn’t ready.”

By the way, Hank and Billye Aaron will be honored at a special 82nd birthday event for former Atlanta Mayor Andrew Young on Sunday, May 18 at the Buckhead Theatre.

The “Pass on the Blessings” event also will pay tribute to the late U.S. President Lyndon Baines Johnson and his wife, Lady Bird Johnson. Their daughter, Ms. Luci Baines Johnson, will accept the award.

Other honorees will include: John and Jan Portman; and Herman and Sylvia Russell.