An Atlanta business bromance at the Georgia Chamber 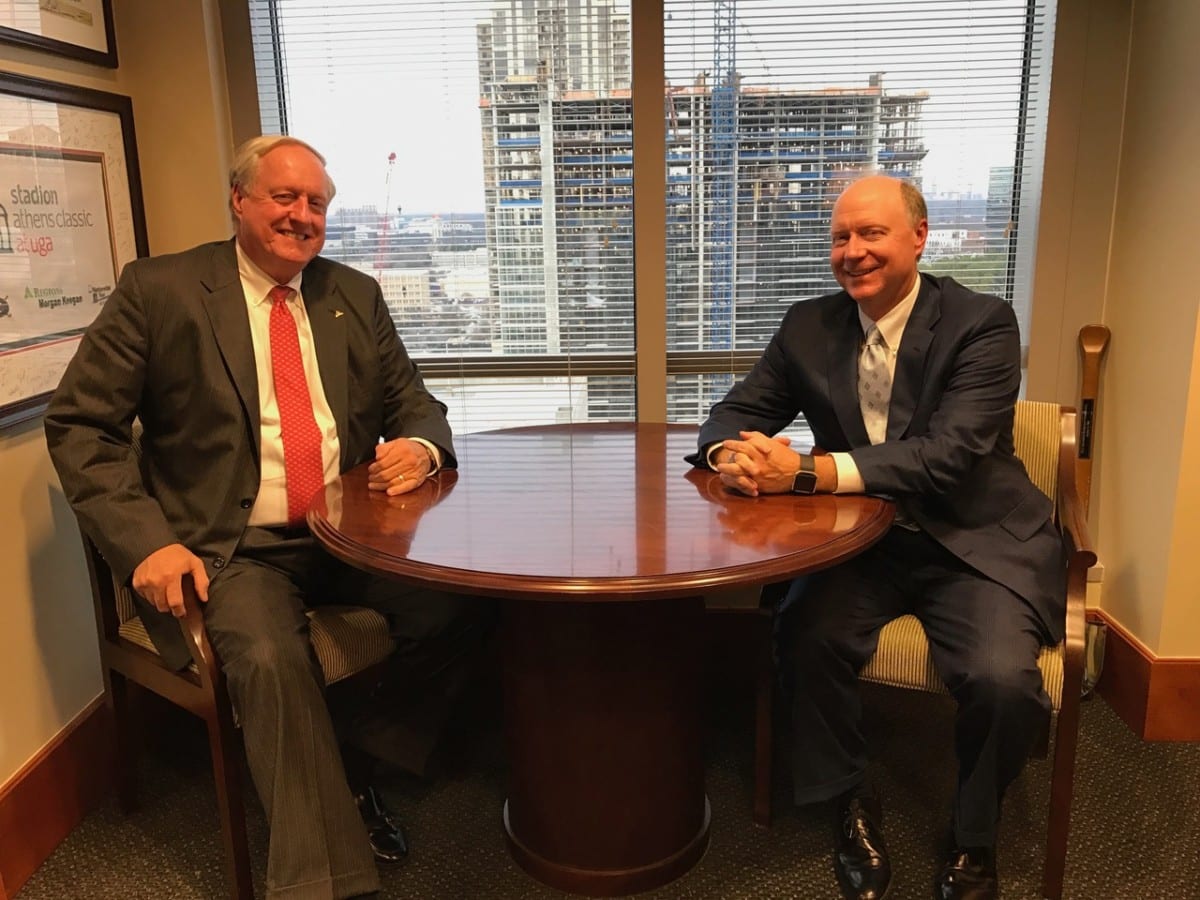 By Maria Saporta
As published in the Atlanta Business Chronicle on Jan. 13, 2017

Never before has someone turned over the chairmanship of the Georgia Chamber of Commerce to his brother – until now.

Hank Linginfelter, the 2016 chairman of the Georgia Chamber, passed the gavel to his older brother, Bill Linginfelter, at the organization’s Egg & Issues Breakfast at the Georgia World Congress Center on Jan. 10.

“As proud as I am of the last year, I couldn’t be prouder of passing the gavel on to my brother, Bill Linginfelter,” Hank said – calling his brother a mentor who happens to be a Georgia Bulldog and a “tireless supporter of our state.”

Upon receiving the gavel, Bill said how proud the entire family was of Hank’s leadership. “My brothers told me not to goof it up,” he said. 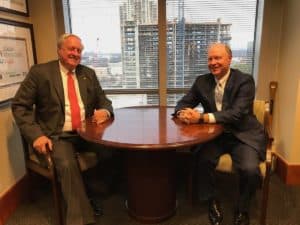 Actually there are four Linginfelter brothers – all who attended different schools and ventured in different career paths.

The oldest is Bill, 60, who is Regions Bank’s area president for Georgia and South Carolina. Before Regions, he had been an executive for SouthTrust and Wachovia. Next is Matt Linginfelter, who has been a Realtor for his whole career, and had attended Kennesaw State University.

Hank, 55, is a graduate of Georgia Tech, and he has spent his entire career with AGL Resources — the same company where his father worked — and he is now executive vice president of distribution operations for Southern Company Gas.

And the youngest is Dan, who attended South Georgia Tech and spent his career in aircraft mechanics, working 35 years for Delta Air Lines Inc. and is now working with Gulfstream Aerospace Corp.

But it was Bill and Hank who have been most active in the metro and state business community — albeit in slightly different circles.

“We didn’t sit in the sandbox and say, ‘Let’s both be chairmen of the Georgia Chamber,’” Bill said laughingly about this unusual twist in their lives.

When Hank had been designated to be the 2016 chairman, he actually was supposed to be succeeded by AT&T’s Beth Shiroshi. But she ended up being promoted to a different job, leaving a void in the line-up.

Georgia Chamber President Chris Clark called Hank and said, “I really want your brother. Would that be weird for you?”

“No I think it would be great,” Hank said, adding it would be best if Georgia Power CEO Paul Bowers, who was the 2015 Chamber chair, made the ask.

“When Paul called, it was a good time for me,” Bill said. “I’m passionate about the business community in this state. I was thrilled and proud when Hank was going to do it. It is a very high honor.”

For most his career, Bill has been involved with the Metro Atlanta Chamber working on regional issues. He also chaired the Georgia Research Alliance for three years, and he served on the board of Westminster School.

“Hank has been active in different things than I have,” Bill said. “We have only really crisscrossed at the Georgia Chamber.”

Both credit their parents for their civic involvement. Their parents went to “competing high schools” in Tennessee. Their father then attended Georgia Tech where he played football for Coach Bobby Dodd. Their mother moved to Chicago to work, and she became the “Miss Air Mail Queen.” 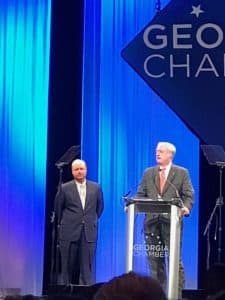 But right before they turned 21, they got married in Atlanta, and their father started his career with AGL Resources, then known as Atlanta Gas Light. They lived in Macon for eight years, where the four boys were born. Then he got transferred to Brunswick, Ga. Later they moved to Rome.

“The Georgia Chamber used to have regional roles, and our father was the regional vice president of the Georgia Chamber in Rome,” Bill said, adding that his father wouldn’t believe that two of his sons would become the organization’s chair. Both parents were in the third class of Leadership Georgia.

But their father died of a heart attack when he was only 45. Their mother died of an accident when she was only 51. So it ended up that Bill took on the role of the family’s patriarch.

“Even as kids, Bill was a big, big brother,” Hank said. “We didn’t have long conversations. But I was very observant, and I watched Bill behave. He always had a game plan. He was very enterprising. He always had a vision of what he wanted to accomplish. I just sort of mimicked what he did.”

When their dad died, Hank needed a summer job, and AGL had openings. He ended up spending his career at the company, rising through the ranks while following his brother’s career.

Because they were in different business sectors, their contact in the community was “intermittent.” But Hank relied on his brother for counsel.

“Bill has the gift of discernment. He can read a situation very quickly and tell you in a few words what’s going on,” said Hank, adding it’s usually combined with laughter. “When we get together, there’s lots of humor in our family.”

Bill says their roles with the Georgia Chamber have made them closer. “It has made us closer because we do have something important in common,” Bill said. “We are collaborating more than we ever have in life.”