Between streaming services, the 24-hour news cycle and never-ending social media feeds, we’re constantly bombarded by content — and not all of it’s uplifting. The younger generation is no exception. The average U.S. child will witness 200,000 violent acts through media by their 18th birthday, according to the American Psychiatric Association, making positive messaging all the more critical for young viewers.

To combat this potentially negative content, the Atlanta Children’s Film Festival is back for its 15th year, showcasing 60 short films by filmmakers from around the world — all with positive messages for the younger generations.

The annual festival is presented by Kids Video Connection (KVC), a local nonprofit that uses video production as a way to teach kids of all ages the media literacy skills they need to navigate the online world.

Co-founder and CEO Alesia Johnson said she established KVC after volunteering with local elementary school kids. One day, she asked about their favorite shows and one boy who frequently got into trouble for being rowdy said his go-to was wrestling.

“He was getting into trouble because he was putting children in headlocks and trying to flip them. In his mind, he’s playing,” Johnson said. “I started researching [their favorite shows,] I observed the children and saw that they were trying to emulate their favorite characters. I realized this is really affecting these children’s behavior.”

This aha-moment led to the creation of KVC in 2006 and, one year later, the short film festival. The festival was originally named the KVC Children’s Film Festival but after adding Atlanta to the name this year, the nonprofit received twice as many submissions compared to the year before.

For the 2022 festival, KVC received 102 film submissions from both young and practiced filmmakers in 14 countries around the world, and selected 60. The screenings will be held at Emory University, with a virtual viewing option. 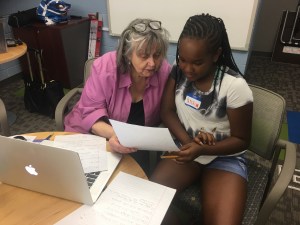 And film screenings aren’t the only items on the agenda. The festival also includes programs for young people of all ages who are interested in production, like an industry panel, a media career fair, an acting workshop and more. Over the years, Johnson has seen these workshops have a real impact on some of the students’ career trajectories.

“One of our board members, Phebe Dowels, was a student in our first teenage video production workshop in 2008,” Johnson said. “She later went on to Georgia State University to major in broadcast journalism, then started producing videos for small businesses. She later sent me a nice letter saying, ‘Thank you for helping me in that first workshop and opening my eyes to this career.’”

Beyond learning about the role of a director or the animation process, the KVC team is focused on helping the younger generations thoughtfully navigate the virtual landscape, think critically about online messaging and, ultimately, consume content that makes them feel good.

“We teach them that all media messages are constructed to make you think or feel a certain way,” Johnson said. “We’re helping children learn media literacy skills so they can analyze what they’re looking at and make a wiser media choice.”

She continued: “We also want them to be hopeful about the future by watching positive films. We hope from watching some of these films, they are inspired to be themselves.”

From now through Saturday, July 23, folks can check out in-person and online screenings of the 60 short films and informational workshops. Click here to see the schedule and purchase tickets.

Click the link below to watch an interview between KVC Intern Kheyal Roy-Meighoo and Emmy Award-winning Animator Alyssa Lewis.