In an effort to respond to growing demand and to improve how it distributes food in the region, the Atlanta Community Food Bank Thursday officially opened its first “company-owned” Community Food Center.

The new Center, a 14,000-square-foot facility in Gwinnett County near Stone Mountain at 1979 Parker Court, will the first time ACFB will be operating its own distribution hub. 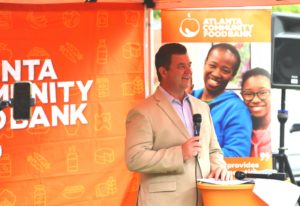 “We want to close the meal gaps in the community,” Waide said in an interview. We have a great network of partners…. But they are not evenly distributed, and their capabilities are not the same. As a result, there are gaps in our distribution network where we need to provide more food to more people more often.”

Waide explained it was a similar model to company having its own outlets separate from a network franchisees.

“We are going to own and operate these ourselves,” said Waide, who described it as a “company-owned store” in retailing. “We are not doing this to compete with our partners. It is to complement our partner network.”

In fact, partners will be able to pick up food at the new Community Food Center if it’s more convenient for them to do so. It also will serve as a base for volunteers. 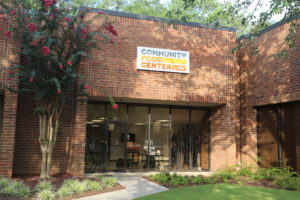 The Community Food Center was made possible by a total of $405,000 in gifts from UnitedHealthcare; Publix Super Markets Charities; Subramonian and Lakshmi Shankar; Kiari “Offset” Cephus; Richard Pitts; and the CardioVascular Group.

ACFB opening of its first Community Food Center on Thursday was just six months after it opened its new expanded headquarters in East Point, a 350,000-square-foot facility.  It’s been fortuitous that ACFB has been investing in a major expansion.

Waide said there are plans underway to have a second Community Food Center in the first half of next year. And depending on how well the Centers work out, Waide said there eventually could be between five to 10 Centers throughout its footprint.

Because of the COVID-19 pandemic, plans are for people to pick up food as part of a drive-through. Eventually, however, it will be set up to act as a grocery store or food pantry. 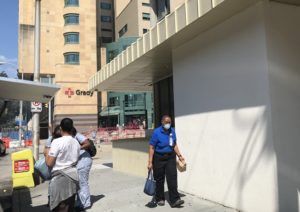 ACFB also partnered with Grady Health System and Open Hand Atlanta to open the new Jesse Hill Market adjacent to the hospital on Aug. 12. The Market is part of Grady’s Food as Medicine program, and it replaces a McDonald’s that used to be at that location.

“Our Food as Medicine program has proven very successful in helping patients with certain chronic conditions improve their health,” said John Haupert, president and CEO of Grady Health System. “The opening of the Jesse Hill Market allows us to expand this important nutritional service in a space that’s easy for our patients to access. Patients with food prescriptions will be able to pick up fresh produce just feet away from our clinic building entrance.”

Eventually, Haubert said the Market will have cooking classes so that patients can learn how to prepare healthy meals. Plus, staff, guests, and even people working close by will be able to stop in to get healthy meals and snacks.