People were full of smiles at the Atlanta Dogwood Festival on Sunday. (Photo by Maria Saporta.)

The Atlanta Dogwood Festival has welcomed Spring in the city for 86 years.

But its future is in jeopardy after two years of the disruptive COVID pandemic and rising costs.

The closing day of the 2022 festival on Sunday, April 10 at Piedmont Park was everything one could have hoped for — a beautiful sunny day with art, music and a wonderful array of people from all over Atlanta and beyond. But the first couple of days of this year’s festival were unseasonably cold and windy — which kept the crowds away.

That’s part of the risk of holding a free outdoor festival in Atlanta. 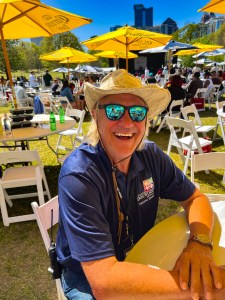 Brian Hill, executive director of the Atlanta Dogwood Festival, on Sunday in the VIP area listening to music. (Photo by David Luse.)

Somehow, the Atlanta Dogwood Festival has managed to maneuver through a multitude of risks for nearly nine decades. Festival organizers are determined to find a way for Atlanta’s largest free arts and cultural event to live on.

On Sunday, Brian Hill, executive director of the Atlanta Dogwood Festival for 14 years, checked in with the artists and vendors lined up along the interior paths of Piedmont Park to see how they were faring.

“The last two days were tough, even though they actually were surprised by the sales,” Hill said in an interview on Sunday. “Today they’re ecstatic. Some said: ‘I appreciate you stopping by, but I don’t have time to talk.’”

Despite its enthusiastic return, the Atlanta Dogwood Festival its facing big challenges. Hill said the 2022 festival will end up with a debt of several hundreds of thousands of dollars – largely because of the impact of COVID.

“I don’t know if the model of a free festival is going to be able to exist,” Hill said. “Across the country, free events are going by the wayside. There’s a real chance we won’t make it.”

To survive the last two years, the Dogwood Festival sold its last asset — its office in King’s Plow — and exhausted whatever reserves it had. Most of the loss can be attributed to the COVID pandemic. There was no festival in 2020, and the dates of the 2021 festival were moved from April to August to meet commitments made to sponsors – but it was far from the springtime event in Atlanta with the blooming of dogwoods and azaleas.

“Our sponsorship revenues are down 45 percent,” Hill said. “My biggest concern with sponsorships is that for two years, they have lived without live events, and they have used that money for digital marketing and social media. I don’t know if there’s a way to get the corporate community more involved.” 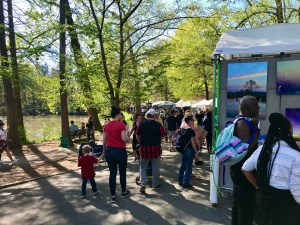 People came out in force to enjoy the Atlanta Dogwood Festival on Sunday. (Photo by Maria Saporta.)

COVID was hard for artists who rely on festivals to sell their work, and the festival’s 50 to 60 vendors also have been impacted by rising costs.

“Right now, the situation we have is not sustainable,” Hill said. “We are having to live with inflation, the cost of labor going up, and that has impacted all of our vendors as well. Artists have had a really tough two years. I would attempt to add more artists to keep the fees the same. It’s about the arts, so we want to keep those costs the same.”

The 2022 festival highlighted 260 booths of artists, and the spirit was to celebrate a return of the springtime festival.

“We did everything we could to spread the feeling of being back,” Hill said. “We brought the family back together.”

The Atlanta Dogwood Festival has worked hard to find new sources of revenue and to reach out to the community so it can be as relevant as possible in Atlanta.

For example, it launched the Mimosa 5K on Saturday morning, which attracted 860 runners who were treated with Mimosas after their run.

“That’s a revenue generator,” Hill said. “I’m also considering creating a run for the arts in about six months. I’m trying to find ways to keep the festival alive.” 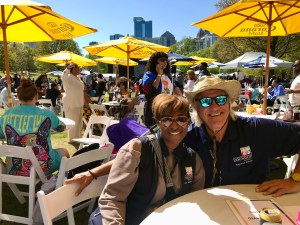 Latoyin “Toy” Rollins and Brian Hill (board chair and executive director of the Atlanta Dogwood Festival respectively) enjoying live music from the VIP area with the Midtown skyline in the background. (Photo by Maria Saporta.)

The festival also has been working with metro area high schools to feature the art of students. This year, the high school art exhibit involved a total of 83 schools in the region. The festival received nearly 700 submissions, and it selected 190 pieces.

The festival also added an extensive international component about eight years ago with an international stage featuring various musical performances.

“I’m proud of the growth we’ve had with the festival,” Hill said. “There’s a strong international flavor. This year we had over 18 countries represented on our stage.”

Latoyin “Toy” Rollins, who is in her sixth year chairing the Atlanta Dogwood Festival’s board, is determined to find ways to make sure the event will take place next year and beyond.

“We are committed to pulling out all the stops and doing everything that we can to keep the festival going,” Rollins said.

“We are in year 86 of the festival. It cannot die on our watch. We won’t allow COVID to push us out.”

She also described the Atlanta Dogwood Festival team as a family that includes the board, the staff, the artists, the sponsors and the vendors among others. 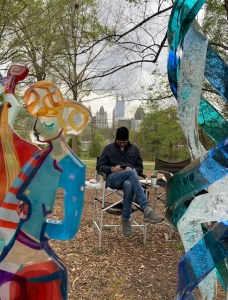 “The festival celebrates the arts, the spring and the city,” Rollins said. “Every decision we make, we go back to our mission — we are a springtime celebration of art and culture and green space.”

Hill is looking for partnership opportunities to keep the free festival in business. He would love to have a stronger relationship with Atlanta’s corporate community, its philanthropic sector and other organizations that could help bolster the festival’s financial foundation. He hopes the greater Atlanta community would be inspired to support the grassroots arts and cultural festival.

“We need to do something different,” Hill said. “We don’t want to let it go.”

In his 14 years at the helm, Hill has witnessed several ups and downs. Five months after he took the job as executive director, the festival was “kicked out of the park” because of a severe drought. Fifty days before the festival was scheduled, Hill was able to secure an agreement to move the festival to Lenox Square. Weather during the festival has been unpredictable, including major thunderstorms.

“COVID was beyond anything we could have imagined,” Hill said. “It’s been beyond tough COVID most definitely has had long-term impact on the festival.”

But Hill reached back to the past to gain perspective. 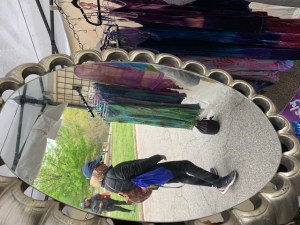 A vendor displays colorful shawls and wraps at the Atlanta Dogwood Festival. (Photo by Kelly Jordan.)

Organizers are working with the administration of the City of Atlanta to make sure it continues as the longest-running arts festival in Atlanta’s history.

“Together we are working towards the same goals — to improve the quality of life in Atlanta,” Hill said.

Dates for next year’s festival are scheduled for April 14 to 16. Hill, and Rollins and the Dogwood Festival’s board are determined to do what they can.

For Hill, Sunday was a reassuring reminder of why the festival is so important for the region.

“It’s beautiful to see people out — not wearing masks and to see people smiling again,” Hill said. “More than anything, I think this festival represents all of Atlanta — all faiths, all races, all nationalities, all genders and all political mindsets. At the hardest times, people turn to festivals to celebrate community. Without festivals, it’s hard to keep that connection. Sunday showed what Atlanta can be. It’s been a beautiful day.” 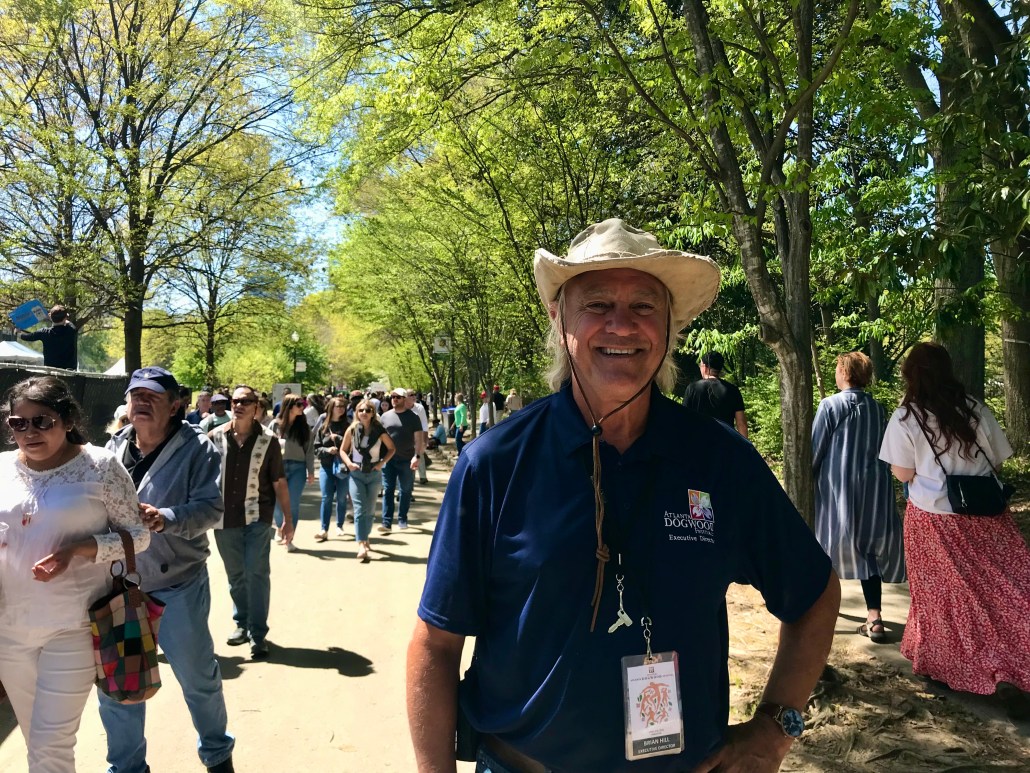 Brian Hill, executive director of the Atlanta Dogwood Festival, checks in with artists and vendors to see how they were faring during the 2022 festival. (Photo by Maria Saporta.) 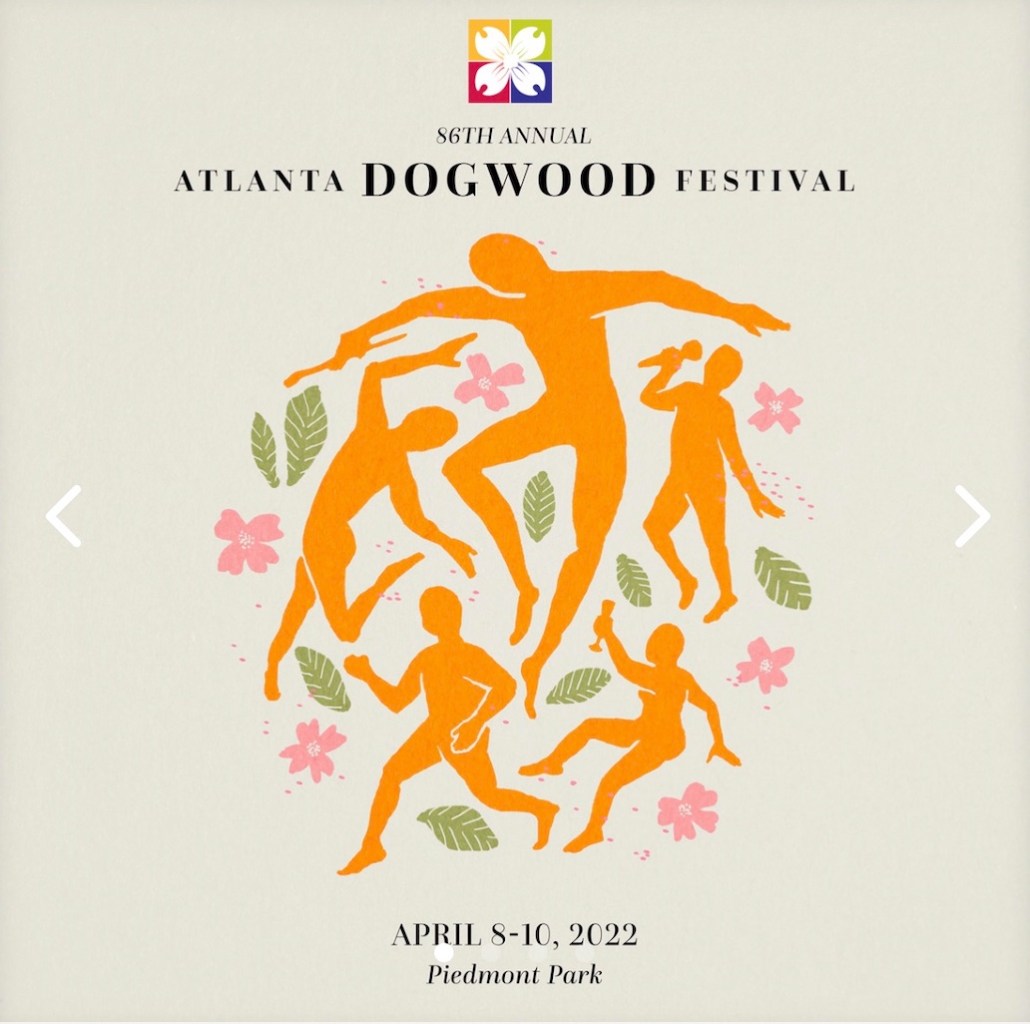 SaportaReport photojournalist Kelly Jordan joined metro Atlantans at Piedmont Park for the 2022 Atlanta Dogwood Festival. See his photos from Friday and the weekend!