A stand-off is intensifying between the west side communities and the Atlanta Falcons over the future alignment of Martin Luther King Jr. Drive around the new football stadium.

Beverly Tatum, president of Spelman College who serves as chair of the Atlanta University Center Consortium, sent the letter on behalf of her colleagues — the presidents of Morehouse College, Morehouse School of Medicine and Clark Atlanta University as well as the thousands of students that attend their institutions.

She said they were “eager to partner in constructive ways with those who share our goal of community revitalization.” But she added that “it was in that spirit of partnership that we want to express our deep concern about the direction that the plans for the new Falcons Stadium seem to be taking.”

Specifically, the issue in dispute is over the proposed re-alignment of Martin Luther King Jr. Drive, which Atlanta Mayor Kasim Reed has said he would like to see transformed into a grand boulevard.

The Falcons’ most recent plans call for the current MLK Jr. Drive to dead-end at Northside Drive west of the new stadium. 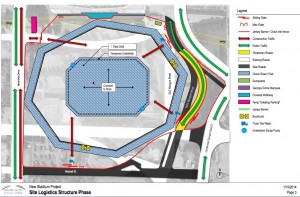 Rich McKay, president of the Atlanta Falcons, sent Tatum his response in a letter on Feb. 3. He copied Mayor Reed as well as several other city and GWCC officials saying that they had weighed many issues before drawing those plans.

“Like the new stadium design process, the reroute plans for MLK are evolving,” McKay wrote. “Numerous city officials have spent considerable time on this reroute in a thoughtful manner and in a way that addresses a range of considerations among the various groups in the project. The preferred and chosen south site for the new stadium is a very challenging one given constraints on most sides of the property — one of the key reasons we held out the north site as viable for this project.”

The Falcons, GWCC, the City of Atlanta and the community at large did consider two sites for the new stadium — the “preferred” south site adjacent to the Georgia Dome and a site about a half mile north of Georgia Dome. The south site was selected largely because it was seen as way to better integrate the stadium with the central city and west side communities, and because it was located between two MARTA stations.

“Be assured that the reroute of MLK is not — and will not be — driven by VIP parking needs,” McKay continued in his letter, which was emailed to SaportaReport late Monday afternoon. “In the ‘Current Plans’ map you included with your letter, the parking to the south of the stadium was a by-product of other key consideration in siting the stadium on the property.”

McKay went on to say that the south site could not have been developed without the acquisition of adjacent properties; that a MARTA line under the northern edge of the new stadium property made it necessary to move the stadium further south on the site; the National Football League recommends a 100-foot security buffer around the new stadium; that here is a need to replace parking; and the fact that the topography of the site limits the opportunities for placing loading and staging areas for the facility. 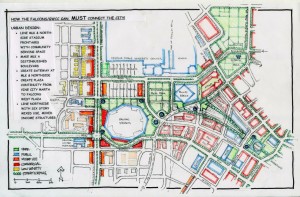 All those factors were what led to the planned redesign of MLK Jr Drive.

In her letter to Blank, Mitchell and Poe, Tatum said such a rerouting of MLK would stand in the way of community revitalization efforts.

“As you know, a combination of factors — among them the long history of residential segregation in Atlanta and the way in which Atlanta physically developed over the decades — resulted in the neighborhoods of which we are an integral part becoming increasingly isolated and cut-off from downtown, leading to the disinvestment and distress so evident in those neighborhoods today,” Tatum wrote. “We share the view of those community leaders, such as Arthur Blank, who have said that it does not have to be that way in the future, and we are heartened by Mr. Blank’s commitment to see those neighborhoods revitalized in part through the efforts of his family foundation.”

Tatum then referenced the map showing the plans for MLK to dead-end at Northside Drive.

“We believe strongly that this current plan has the potential to further disconnect and separate our Westside communities from downtown both physically and symbolically,” she wrote. “Not only would this plan be harmful to the communities, it also appears to contradict Mayor Reed’s vision of a vibrant “grand boulevard,” Arthur Blank’s commitment to igniting positive change, and our own efforts to transform the area.”

To that McKay responded that the Falcons did in fact care about their concerns.

“As you know, we are sensitive to the history and concerns of the neighboring communities, and I think you would agree that we are highly invested in partnering in long-term solution for the communities through the past and future work of Arthur’s family foundation,” McKay wrote.

“I can’t speak specifically to the Mayor’s grand boulevard plans, but I do know through numerous conversations with the Mayor that he is highly committed to making our MLK Boulevard the best in the country,” he continued. “In addition, opening and connecting the west side neighborhoods to Centennial Park, and downtown Atlanta generally, is a priority in our stadium and site planning, whether in the form of roads, walkways, bicycle paths or other forms of access.”

Although McKay offered to sit down with the university presidents to discuss the latest stadium design plans, he stopped short of promising that they would be changed to alleviate their concerns.

Tatum, however, said the community has been meeting with Michael Dobbins, the former planning commissioner for the City of Atlanta who is now a professor of city and regional planning at Georgia Tech, to propose alternative plans that would “foster greater connectivity and community revitalization of Vine City, English Avenue and the Atlanta University Center communities.”

She also said the alternate plan “would maintain the continuity of MLK, attract new businesses and make it a grand boulevard….”

The Atlanta City Council already has been presented the Falcons’ proposed realignment of MLK, but those plans were put on hold when several council members expressed concern about the impact it would have on the west side communities.

It is not known when the proposal will resurface at a council meeting.