It’s time for the Atlanta community to be creative.

During this period of the COVID-19 pandemic, several Atlanta institutions are finding creative ways to continue convening – virtually rather than in person.

The goal, in most instances, is to provide useful information and support to our community while we try to cope with the necessary limits to interacting with the outside world or being able to meet in person because of the new Coronavirus outbreak.

A great example is the live webcast that members of the Leadership Atlanta 2020 class were inspired to put together – partly because its program days had to be canceled. (Full disclosure: I’m a member of the 2020 LA class).

The webcast, titled “TOGETHER WE CAN: Sharing Hope & Love During the Pandemic,” will be livestreamed on Saturday, March 21 at 7 p.m. through the www.Connect-Today.com website. The webcast will be available at that link during and after the virtual event. 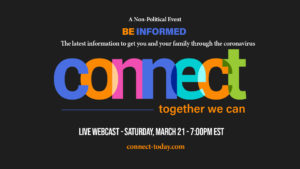 Invite to join the “Together We Can” live webcast on Saturday, March 21 at 7 p.m.

The one-hour webcast will feature objective experts – health care professionals, educators, wellness coaches, work-life experts, entrepreneurs and business leaders, non-profit leaders and faith leaders – who all share one common goal: “To bring HOPE & LOVE to the community during a time of uncertainty.”

The inspiration for the webcast came from LA 2020 team member Conn Jackson, a television producer of uplifting content through his company – InspireOne.

“I felt a calling to take on an initiative,” said Jackson, who felt the need to do something after the Leadership Atlanta March 19 program day was canceled. “I knew I could provide a platform where people with amazing experiences could share actionable steps.”

Jackson reached out to 2020 class members, and nearly a couple dozen people responded with offers to help. The effort also was expanded to include members of the 2014 class.

Among the class members who responded were: Raphael Holloway of the Gateway Center; Elaine Armstrong of Goodwill of North Georgia; Adam Walker of Sideways 8 Interactive; Gairy Moore of Deloitte & Touche; Zenith Houston of Posse Atlanta; Jerry Chang of Ankura Consulting; Faraz Iqubal of Naranga; P.J. Bain of PrimeRevenue and countless others.

“We have amazing resources in our own class,” said Jackson, who put together the effort in just one week. “We are leveraging our resources and reaching out to a community of experts.”

There were two other examples of how we’re continuing to convene despite the Coronavirus outbreak.

The Metro Atlanta Chamber on Thursday, March 19 held its first-ever virtual board meeting – also inviting its Board of Advisors and Backed by ATL companies – for a total of 270 participants.

In both cases, the organizations used the virtual meeting to impart information that could be useful to a community trying to navigate during this period of uncertainty.

“We were pleased with how well it went,” said Deisha Barnett, MAC’s chief branding and communications officer. “We are reassessing all of our convening events. We are navigating this unchartered territory.” 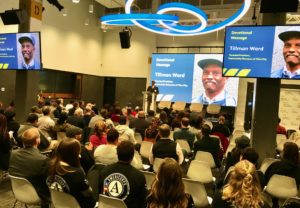 The Transform Westside Summit, which meets for breakfast on the first and third Friday of each month, usually attracts more than 200 community and civic leaders. At this one, Tillman Ward gives the morning devotion on Jan. 17, 2020 (Photo by Kelly Jordan)

The Transform Westside Summit, hosted by WFF’s CEO John Ahmann, offered tangible information for community residents on how to get food, medical advice, mental health support, financial aid and elderly care. During the webcast, experts provided phone numbers, web links and details of how people could get support.

The Summit will hold its next virtual meeting during the morning of April 3, and it is possible to view it through multiple Westside Future Fund channels, including its Facebook page.

“We were really encouraged by how well it went,” Barnett said. “We are thankful that we have the technology that we can enable to continue to establish connections.” 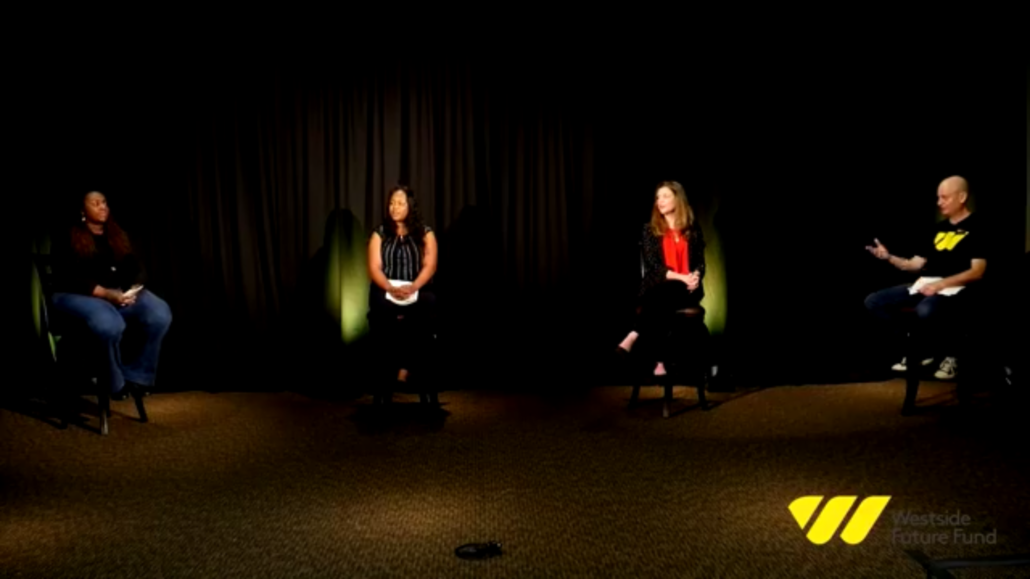