A new Atlanta Habitat for Humanity ReStore and Service Center in the City of South Fulton has opened its doors.

Habitat is a nonprofit that works to improve housing and empower residents to reach their homeownership goals. 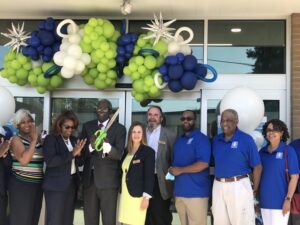 The organization has had an estimated $40 million impact in city neighborhoods over the past five years.

“This new ReStore will add to South Fulton’s vitality and will be one of the anchors in the revitalization of the Old National Highway,” Mayor William Edwards said during the ribbon-cutting ceremony. “[We will] invest in our community and build together.”

The ReStore is a second-hand store with lightly-used furniture, home decor and appliances sold at affordable rates. There’s even a barely-used kayak and surfboard up for grabs.

The ReStore helps foster a sustainable community, one of Habitat’s main priorities, by giving these items a second life.

“A lot of times people renovate their homes, and there’s appliances or cabinets that come out of the homes and, instead of going to landfills, it can come to the ReStore,” Lisa Gordon, president and CEO of Atlanta Habitat, said.

Three programs will operate out of the Service Center, funded in part by the ReStore, including home improvement efforts like Repair with Kindness and Brush with Kindness. My Money. My Future. provides financial literacy classes and one-on-one coaching. 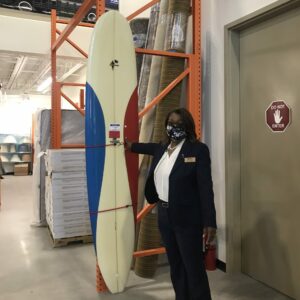 With the expansion, Atlanta Habitat aims to serve 1,200 additional families by 2025, particularly in South Fulton, East Point and Fairburn.

“I think right now, in all of the communities across metro Atlanta and across the country, there’s a huge need for housing that’s affordable at multiple income levels,” Gordon said. “The families that we serve, we feel there’s a huge need [for resources] for service and hospitality workers… where people are doing lots of jobs that support our community, but they have a lack of access to quality, affordable housing and homeownership.”

“During the pandemic, people needed to use their homes for not only where you come to rest, but for work and play and school. So the home turned into a lot more,” she added.

Williams agrees with Gordon about the importance of stable housing and access to homeownership for South Fulton residents.

“There’s always the need for affordable housing,” he told SaportaReport. “We have to be a community that welcomes everybody, no matter what ethnic background or race or financial position. This is one of our oldest communities here in South Fulton … I’m really excited about the prospect of revitalization.”