The Atlanta Hawks may be trying to get top dollar when it comes to selling the team, but right now the team is not a hot ticket on the road.

TickPick, a no-fee secondary ticket marketplace, just released a study showing that the Hawks rank near the bottom in road team popularity – 25th among the 30 teams in the National Basketball Association.

The study looked at average ticket prices as the visiting team for the upcoming 2014-2015 NBA season. For out of town fans of the Atlanta Hawks, it will cost an average of $169.89 to go to a game on the road during this upcoming season.

The hottest ticket for this season is to go see the Cleveland Cavaliers – reunited with basketball hero LeBron James. The average road game ticket costs $411.77.

According to Forbes Magazine, the value of the Hawks team in 2014 is 27th in the league worth an estimated $425 million. Forbes said its annual revenue is $119 million, and it has had an operating loss of $3.6 million.

“The Hawks have made the playoffs for six straight years, but have not made the conference finals since 1970 when the NBA operated with only 14 years,” Forbes wrote.

At least 50.1 percent of the Atlanta Hawks – the ownership share represented by Bruce Levenson –.is currently on the market. 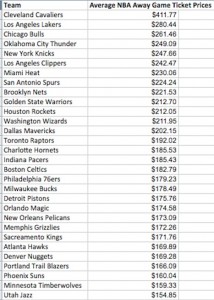