During this past weekend’s Atlanta Hawks playoff games Hawks at State Farm Area, Spike Lee – film director, producer, actor and avid New York Knicks fan – had seats on the floor, much to the dismay of the Atlanta Hawks.

“We would not sell Spike Lee a ticket on the floor,” said Steve Koonin, president of the Atlanta Hawks. “He bought it from a season ticket holder.”

But Koonin recognized having Spike Lee in the house “does add to the hype.” As such a legendary Knicks fan, Lee had to witness the Hawks win two decisive sold-out playoff games in Atlanta – going up in the series 3-1. 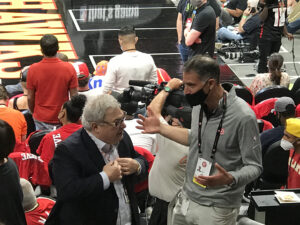 “That was most enjoyable,” said Koonin, who watched Lee sink further down in his front row seat as the Hawks took the lead in both games.

Also, Nate McMillan, interim coach for the Atlanta Hawks, was fined $25,000 for “detrimental public comments asserting bias by the NBA” in favor of the Knicks, because New York is a much bigger media market than Atlanta.

This is what happens when two hungry teams (both that haven’t seen playoff action for several years) find themselves fighting each other to get to the next round.

But, in some ways, Koonin said the back-and-forth between the teams and the cities’ mayors is a metaphor for Atlanta – a city that is still trying to prove itself on the world stage.

“New York has always been the capital of the world. It’s been the epicenter,” Koonin said in a telephone interview Monday afternoon. “Atlanta, for some reason, doesn’t get recognition for being seventh or eighth largest market in the United States.”

As an example of how the Atlanta Hawks also have been underestimated, Koonin cited an ESPN poll of 17 basketball sportswriters – 15 predicted the Knicks would win while only two picked the Hawks. 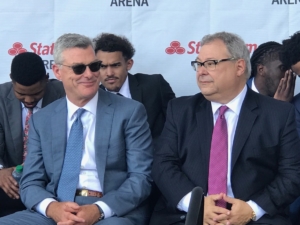 “People don’t understand and respect what has happened here, what is happening here and what will happen here,” Koonin said. “We feel it is our time as a city.”

But Koonin stopped short of predicting the Hawks would beat the Knicks to go to the next round in the playoffs. He didn’t want to jinx Atlanta’s dominant position with the Hawks needing only one win to clinch the series against New York.

Koonin, however, was pleased to boast about how the Hawks are an up-and-coming team and how much progress the team has made since 2014 -2015 season when Koonin became CEO of the Hawks and Tony Ressler became the principal owner of the team and what is now named State Farm Arena.

“We had two goals when we started this,” Koonin said. “One was to build a multigenerational base of fans. We want the Hawks to be Atlanta’s team for the next generation. The second goal was to have a diverse audience, which we have achieved. Forty-five percent of our ticket buyers are African American. We are No. 1 among NBA teams (based on the 2019-2020 ticket sales).”

The Atlanta Hawks have been intentional in embracing diverse audiences.

“Our building was designed to reflect our city,” said Koonin, using Killer Mike and Zac Brown as examples.

Meanwhile, the Atlanta Hawks also are building strong ties with the city’s largest companies. On Friday night, Delta Air Lines’ CEO Ed Bastian had floor seats. On that same night, the Atlanta Hawks celebrated its deal to use financing from an alliance of black banks. Then on Sunday, Chris Womack, president of Georgia Power, was in attendance. 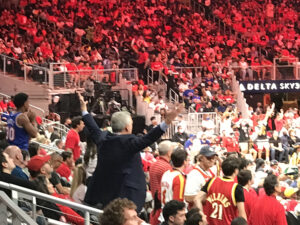 Atlanta Hawks’ owner Tony Ressler was in attendance, as he is at most home games.

“The business community has been great supporters of ours – Coca-Cola, Delta, UPS, among others,” Koonin said. “We are a marketing asset for them. Basketball is good for business.”

The Hawks also have a unique relationship with Atlanta-based Sharecare, which has its logo on the official team jerseys. “We literally are making Sharecare part of the fabric of Atlanta by having its logo on our uniforms,” Koonin said.

While New York is still the biggest market in the country, Koonin said Atlanta’s stature is definitely moving up – and he described the Hawks as a metaphor for the city. Both Atlanta and the team are young, aggressive, progressive, ambitious and ascending.

Meanwhile, the Hawks decided decades ago to keep its roots downtown. Philips Arena was built on the site of the Omni Coliseum, and then it underwent an extensive renovation that coincided with the renaming to State Farm Arena.

And Tony Ressler’s brother – Richard Ressler – is a key player in the CIM Group, which is putting together a $5 billion deal to redevelop the old railroad gulch in the historic part of the city – adjacent to the arena.

“Not only did we stay downtown,” Koonin said. “We are building downtown, which is very exciting.”

Again, there’s a metaphor – building a basketball team and a city for the future.

Perhaps even Spike Lee, an Atlanta native who went to Morehouse College, will come to appreciate and root for the Atlanta Hawks. Could Lee adopt the Atlanta Hawks as his second favorite NBA team?

To that, Koonin simply said: “I don’t think being second favorite matters a whole lot.” 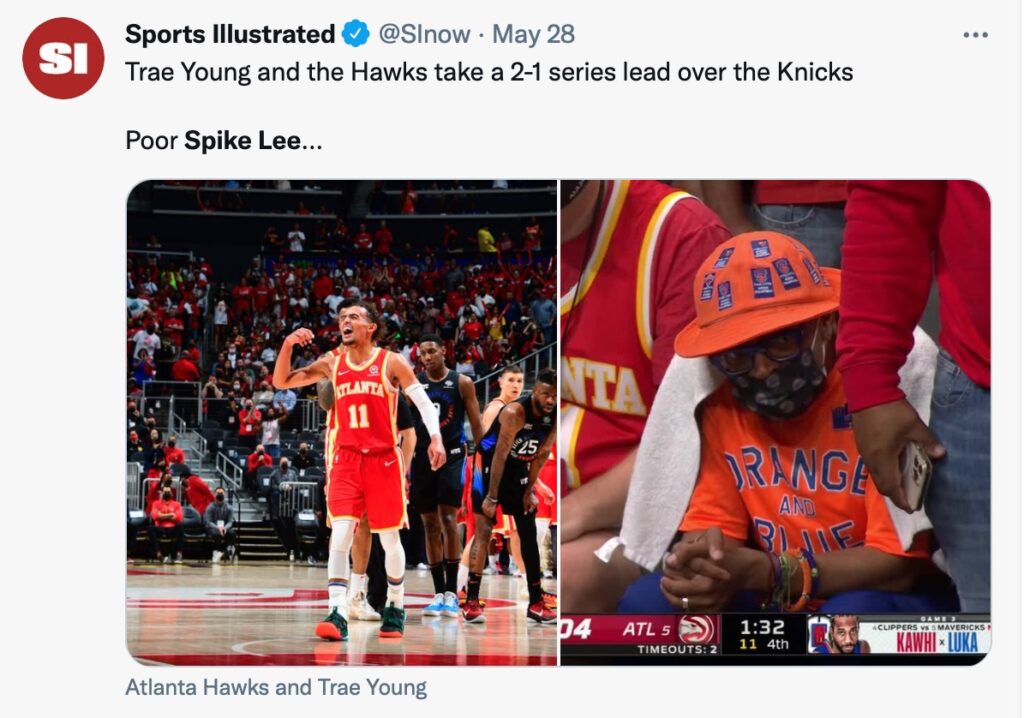 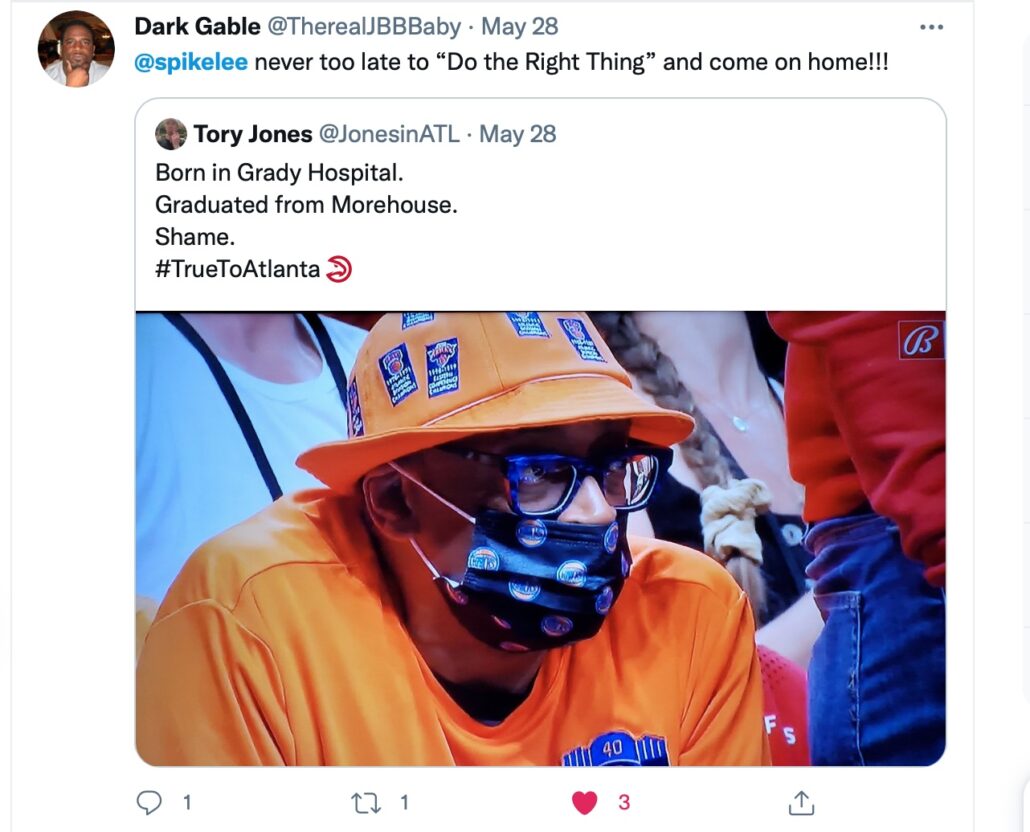 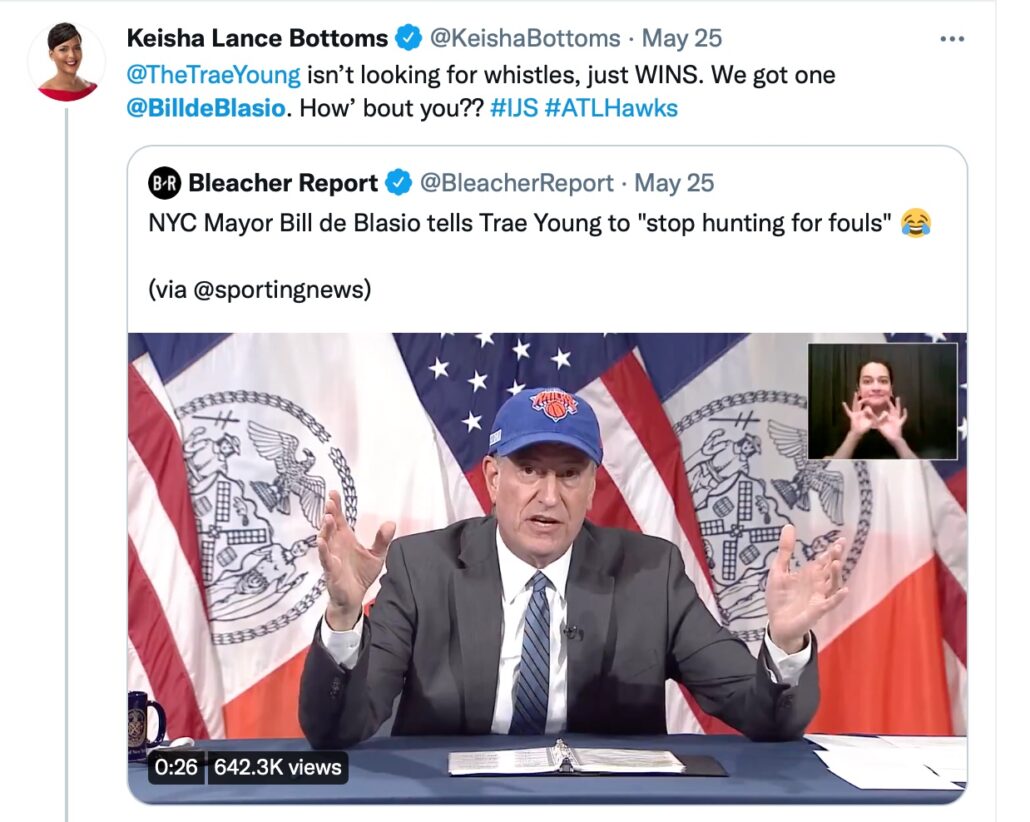