Amid loss, no tears from these Atlanta clowns

February in Atlanta is circus month, and but not all the clowns are goofing under the Big Apple and Ringling Bros. big tops. 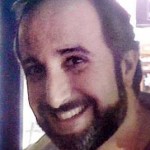 Far from the spotlight, for all but two weeks a year, a local troupe of clowns managed to practice their craft for tiny, tough audiences: some of the sickest kids in Georgia, even some who are dying. As clowns, they’ve kept their show going on this year even after sudden loss in their own ranks. 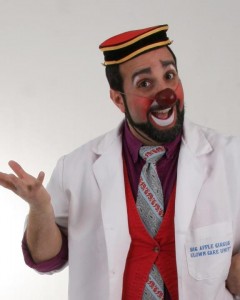 For the surviving members of the Big Apple Clown Care Unit, creating laughter in the face of heartbreak has transformed them far more than wearing a funny hat, a fake nose and makeup ever could.

Their ability to work in highly emotional situations – and key advice from young patients — helped these clowns survive after the recent deaths of fellow clowns Vincent “Dr. Giacomo Pucci” Tortorici to a sudden heart attack and Mary Ann “Nurse Practitioner Very Merry” Hart to breast cancer. Kids on the edge of life and death can teach a clown a lot about mortality.

“You guys get back to your jobs,” a 13-year-old patient told the clowns after Tortorici’s death, before parroting a quote from the movie, “A League of their Own”:

“Pucci’s okay,” the patient said. “There’s no crying in clowning.”

That attitude carries these 10 clowns on seven weekly visits to Scottish Rite and Egleston, the two main Children’s Healthcare of Atlanta Hospitals. They are prepared to do pratfalls and skits, play songs, juggle, tell jokes, do magic, sing and dance. But each stage – each room, each patient – is unique.

Unlike regular circus entertainers, these clowns they have to face audience members who might not be ready for a laugh or even want to see them.

They have to improvise, revise and even dump routines depending on the patient’s mood or condition — or if an emergency arises that force them out of a hospital room altogether.

They have to prepare themselves to face suffering they themselves have never experienced, and to forms bonds with children they cannot hold. They get close enough to the children to be invited to their cancer remission parties as well as their funerals. To help them cope, a therapist attends their rehearsals.

Their leader, Meredith “Dr. Squeeze” Gordon, recalled once being asked by a hospital chaplain to play a song on his ukulele for a family. 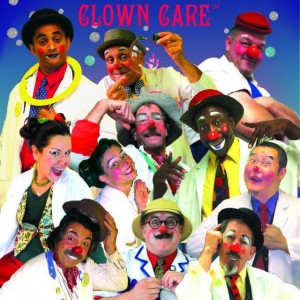 “They had this infant, maybe an 18-month-old, who was passing away,” Gordon said. “So I just played, ‘Twinkle, Twinkle Little Star.’”

“The child’s four-year-old sister sang along,” Gordon said. “It was this very sweet thing, this very touching thing.”

His team – in light makeup so as not to scare the kiddies — look past the seriousness of the injury or illness of the patients to the well part of the child.  “There is still a child in there who can to some degree laugh or smile,” said Gordon. “Our goal is find them.”

This is how Tim “Dr. O.K. Dokey” Settimi and his clown partner work with a “no, not today” from a sick kid: “We’ll say, ‘well, okay,’ and then all of a sudden our hats fall off. We try to pick them up, but we end up kicking them against the wall. Then we kick them all around the room. More often than not the kid’ll start laughing and we’ll stay.”

Tortorici was a master at reading the moods and mannerisms of children and family members and finding something that would make them laugh, Settimi recalled.

“One dad was wearing a Harley Davidson t-shirt. Vince rode a scooter,” Settimi recalled. “So Vince starts talking like he’s this big pretend biker. Vince was really good at being observant and catching something in the room and turning it into something.” 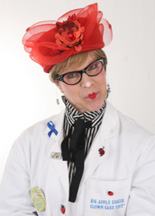 Last August, when Tortorici’s number showed on Reuben “Dr. Doohickey” Haller’s phone, Haller expected to be summoned to substitute for another clown. Instead it was Tortorici’s girlfriend Leslie Suson delivering the bad news. Dr. Pucci, 44, was gone, and the clowns had a new type of grief to handle.

It was up to them to continue the work that Tortorici, according to his mom Toni, considered a ministry.

“He was the best clown teacher I ever had,” Haller said. “I still channel things from him.”

In December, the team suffered another blow when Hart, who had left the clown unit three years earlier to battle breast cancer, died. 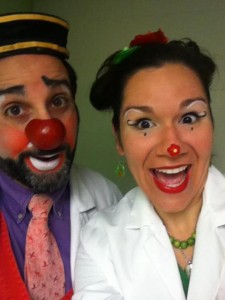 Personal loss and struggle have made these clowns the performers they are today, still constantly learning from their young patients.  “Being with the kids makes you less afraid of your own mortality,” said Settimi, a kidney cancer survivor.

“Very often children seem to handle death with so much more wisdom than adults do. I think we’ve become more afraid of death as we get older. Kids believe what they’re told about religion and heaven and as adults we get to questioning. We react to it kicking and screaming.”

A friend once asked Settimi what it was like to do this kind of clown work. Settimi responded with a quote from Tortorici’s blog:

“I’m in the sweet spot between doing what I love and making people happy, that is also of service to the world.”

“That’s got to give you good karma,” the friend remarked. “You’re going to straight to heaven.”

Ben Smith is a freelance journalist based in Decatur. He can be reached at [email protected]

Previous Article
Chattanooga: Eating our lunch in liveability
Next Article
Maker’s Mark gets a lesson in brand identity