The regional office of the U.S. Department of Housing and Urban Development has approved the settlement agreement between Atlanta Housing (AH) and developer Integral Group and its business partners.

At a February AH board of commissioners meeting, housing authority officials said the agreement was subject to HUD approval.

Then, with little advance notice, the AH board announced a special-called meeting via conference call. It was first scheduled for 8 a.m. Monday and then pushed back to noon.

As soon as the meeting convened, the board voted to enter executive session. The private conversation lasted roughly an hour and 15 minutes, and the board meeting adjourned immediately after. AH officials said no actions had been taken during the session. 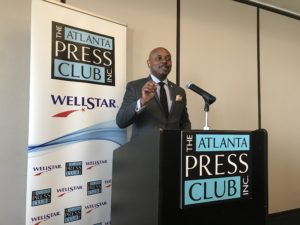 Eugene Jones Jr., president and CEO of Atlanta Housing, speaks to the Atlanta Press Club in 2019 (Photo by Maria Saporta)

AH CEO Eugene Jones told SaportaReport after the meeting that it was “mainly” about how the public housing agency planned to address COVID-19, a disease caused by the novel coronavirus that’s spreading across the globe.

Asked whether there was talk Monday of the settlement agreement with Integral Group, though, Jones said only, “Everything is fine; everything is going forward.”

The deal, which was finally approved by the AH board during the February meeting, has been a major source of contention among board members, involved developers and the public.

The settlement calls for the conveyance of nearly 80 acres of land neighboring four Integral Group communities to a partnership between the development teams and Atlanta Housing for roughly $21.9 million.

Now, according to Jones, the terms of the disposition — land transference — must earn the approval of HUD’s Special Applications Center in Chicago. “After that, the timelines are enforced,” he said, nodding to the contract’s demand that developers start building on the land in question within three years of the settlement’s finalization.

The settlement mandates that the development partnerships “shall develop or ensure the development” of 2,035 residences on the land in question, and that 389 of those units would have to be earmarked as “affordable” housing priced at between 80 and 120 percent of the area median income.