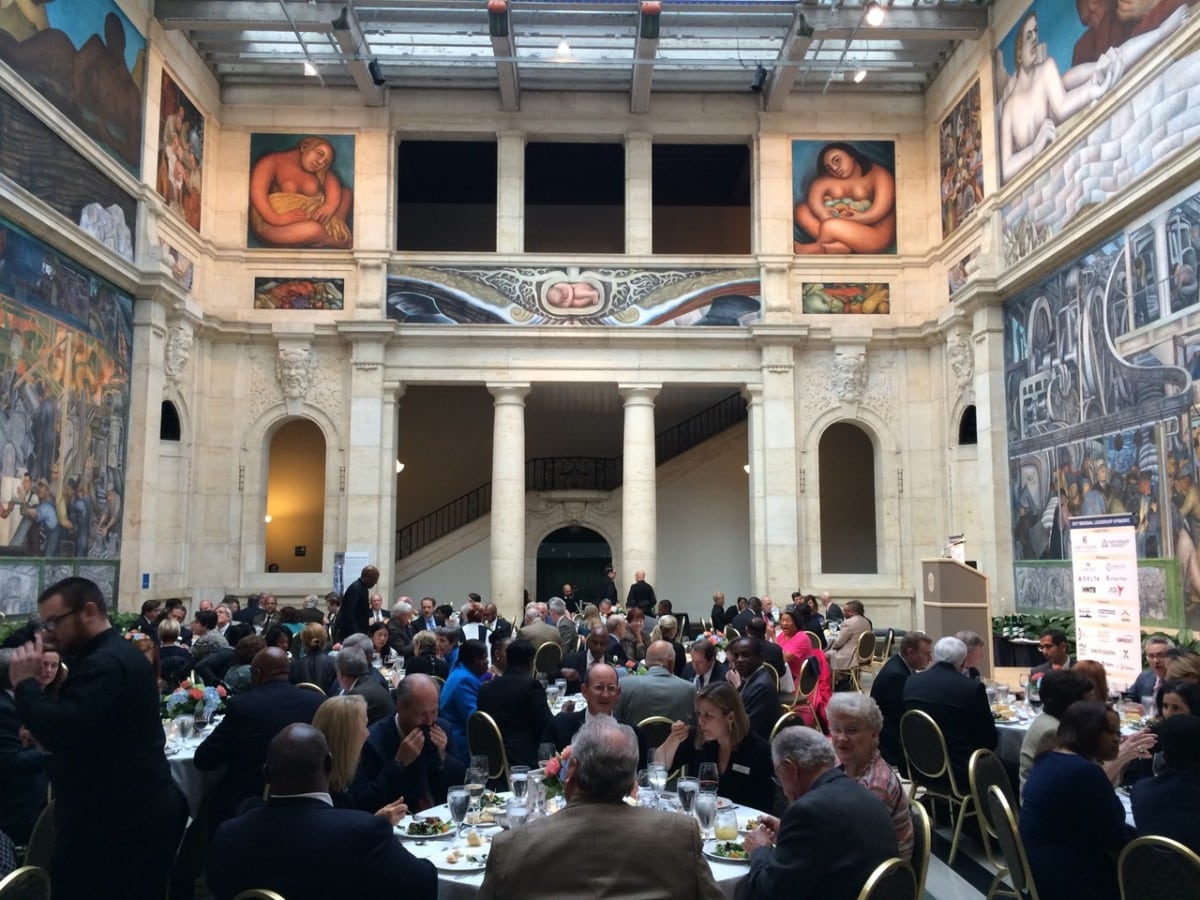 By Maria Saporta
As published in the Atlanta Business Chronicle on May 19, 2017

About 130 leaders from the Atlanta region spent the better part of three days learning about the ups and downs of Detroit on the annual LINK trip from May 3 to May 6 — seeking insights they could bring back home.

Impressed by the candor of people in Detroit, Atlantans heard firsthand from leaders how the city has emerged from the largest municipal bankruptcy in U.S. history (filed in July 2013) following the conviction of Mayor Kwame Kilpatrick in 2008 on multiple felony counts. 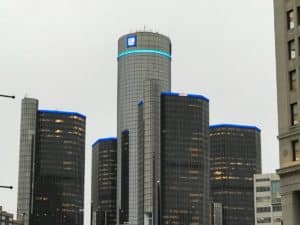 Renaissance Center was designed by Atlanta’s own – John Portman. It was viewed as a downtown fortress when it was built, but now it has become a symbol of Detroit, which has kept many of its historic buildings (Photo by Maria Saporta)

“We got the pleasure of going into the recession about two years earlier than the rest of the country,” said Tom Lewand, CEO of Detroit-based Shinola, a growing manufacturing company that makes watches, bicycles, turntables and small leather goods.

“Detroit was sorely in need of putting people back to work,” Lewand added. “We are proud to say we are from Detroit. Our heritage is manufacturing.”

Despite the multiple obstacles Detroit has faced, Atlantans found a passionate, grassroots pride among leaders in Detroit intent on finding ways to rebuild their city. “There’s a lot of hope here and a lot of hustle,” said Erica Raleigh, director of Data Driven Detroit, who said the city and the suburbs don’t work well together. “For decades, we were all-out competing against each other. We would do better if we weren’t stealing businesses from one another.”

The city’s bankruptcy, described by some as “the best thing that happened to us,” forced philanthropic, business and government leaders to work together.

“The media in the United States and the world were writing this city’s obituary,” said Judge Gerald Rosen, who helped put together the Grand Bargain that permitted Detroit to keep its famed art collection as well as cover about 95 percent of the city’s pension obligations.

Despite accusations the city was placing art above people, Rosen said Detroit would not have survived if the city had liquidated its museum and its arts collection.

“We would have put an exclamation point on our obituary,” Rosen said. 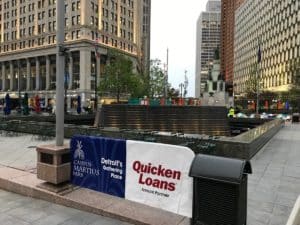 A sign at the Campus Martius Park downtown says it all – Quicken Loans, and its founder Dan Gilbert – have been investing in downtown Detroit real estate and moving jobs to the city (Photo by Maria Saporta)

“As a child, I remember Detroit in its greatness,” Mayor Mike Duggan told the Atlanta delegation during a dinner at the Detroit Institute of Arts surrounded by murals of Diego Rivera. “Detroit is going to come back.”

Duggan had been living in the suburbs and decided to run for mayor as a write-in candidate in a city with a black population of 80 percent. For those wondering how Detroit elected “someone who looks like me” as mayor, Duggan said he built support from the ground up by sitting down with people in their homes.

“We have let us-versus-them politics tear us down,” said Duggan, who is running for re-election and has built city-wide support. “We still have the highest unemployment rates in Michigan. We still have blight. But wherever we are going, we are going there unified.”

Detroit has launched several initiatives to get people to move back to the central city, including Live Detroit. Major employers encourage their workers to live close by. Because there is not a regional transit system, it is difficult for the urban poor to get jobs in the suburbs and vice-versa.

A regional bus transit referendum failed last November by only 17,000 votes, and leaders are hopeful the gulf between the city and the suburbs is narrowing. 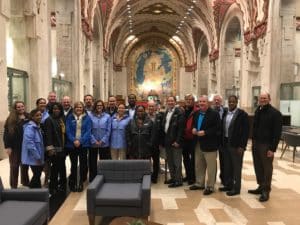 But public education continues to be a weak point. “Detroit is the lowest academically performing city in the nation,” said Tonya Allen, president of the Skillman Foundation.

Alycia Meriweather, the interim superintendent of the Detroit Public Schools Community District, said 60 percent of its students live at or below the poverty line — which is a family of four living on a $24,000 annual income. She made the distinction between “equal” — where everybody gets the same; and “equity” — where everybody gets what they need.

“We do lead with race and equity in almost every conversation,” said Maurice Cox, Detroit’s planning commissioner.

“We are embarking on a fairly unique urban experience,” Cox added. “We are embarking on an equitable recovery.” In other words, Detroit is committed to growing its population without displacing the people who stuck with the city. “Let’s plan with them. We are about deep, deep engagement with zero displacement.”

Cox said the city is plagued with acres and acres of blighted and vacant properties.

“We’ve been trying to figure out what happens when 1.2 million people leave and leave their buildings behind,” he said. “We have 60 schools that are vacant.”

Detroit demolishes about 200 houses a week, and it still has a backlog of dilapidated structures. 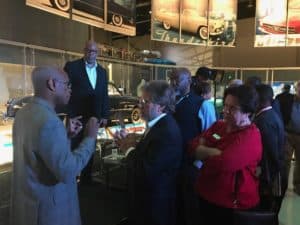 Detroit currently has seven urban redevelopment experiments underway. One is turning 300 lots into gardens and urban farms. It is creating a “green collar” industry to give people training on urban agriculture and other businesses.

“We are trying to restore the authenticity of a working-class neighborhood in Detroit,” Cox said.

Because it was built to house a much larger population with many highways, Detroit doesn’t have the traffic problems Atlanta has. But even its Big Three auto manufacturers are having to contemplate a future with autonomous cars and more transportation alternatives with less parking.

And because the city was losing population, it did not lose many of its historic buildings to development. Several Atlanta developers described Detroit as “having great bones.”

Kevin Greiner, president and CEO of Gas South, said he was struck by how Detroit was focused on what’s equitable, a conversation he hoped “we can take back to Atlanta.” 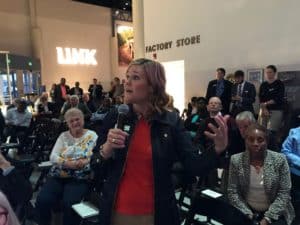 Georgia State Sen. Elena Parent, who was on her first LINK trip, said she was inspired by Detroit’s candid discussions on race and class.

And Doug Hooker, director of the Atlanta Regional Commission, which organizes the trip, summed up Detroit as a “place that grows on you,” and he described the resiliency of its people as “inspiring.”

Daniel Kaufman, president and CEO of the Gwinnett Chamber of Commerce, said education remains Detroit’s greatest obstacle among the many it faces.

“They have rescued Detroit, but they haven’t saved it,” Kaufman said. “The good news is that downtown and Midtown are vibrant. They have to attract young professionals, entrepreneurs and taxpayers into the city.

“They are where Atlanta was 30 years ago — a black core surrounded by white suburbs,” Kaufman continued. “We have integrated ourselves in both directions. Our suburbs are more diverse and we have an urban core that is vibrant.” 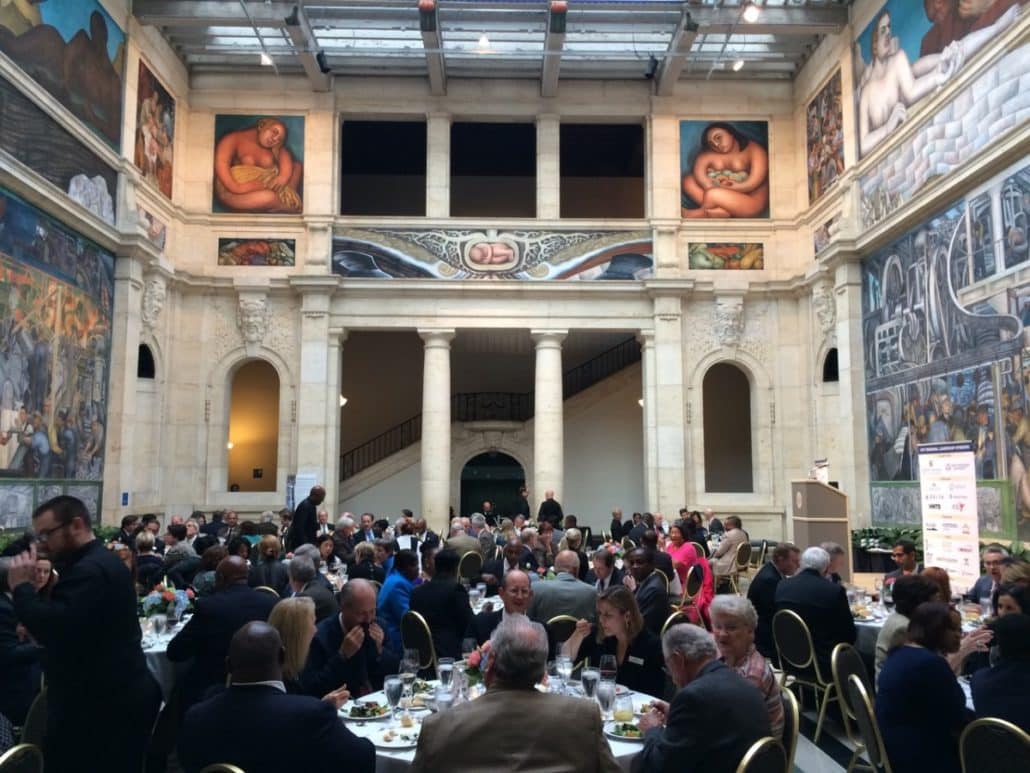 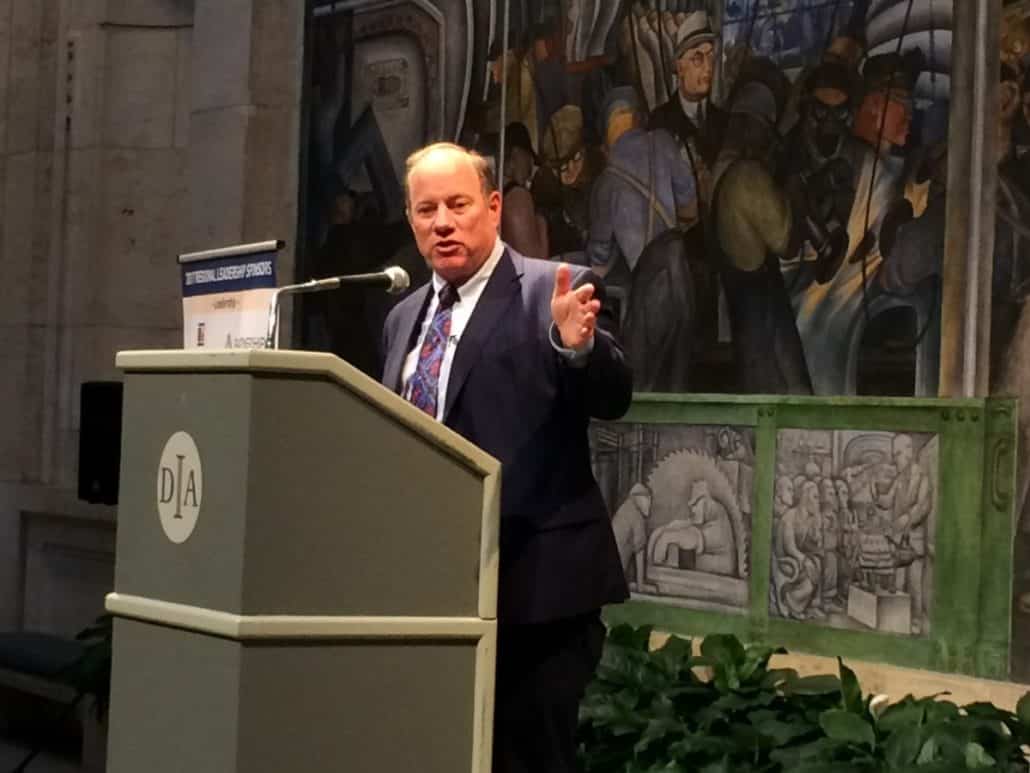 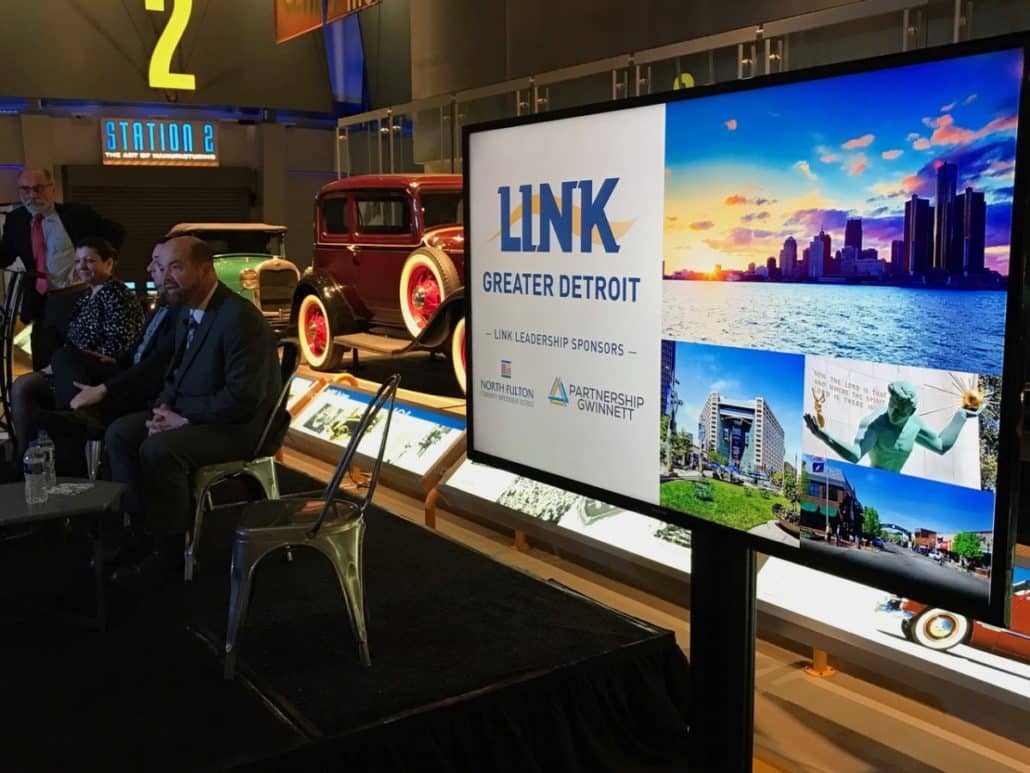 LINK delegation visited the Ford Rouge Factor in Dearborn, Michigan where they learned about the origins of Detroit’s automobile industry (Photo by Maria Saporta) 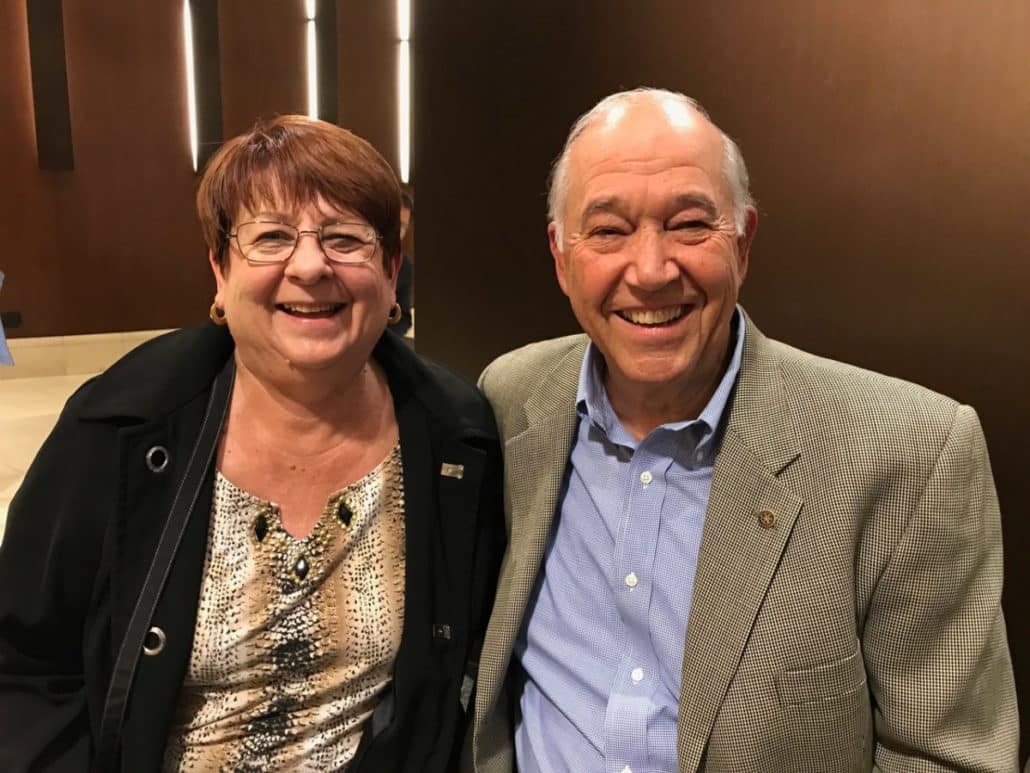 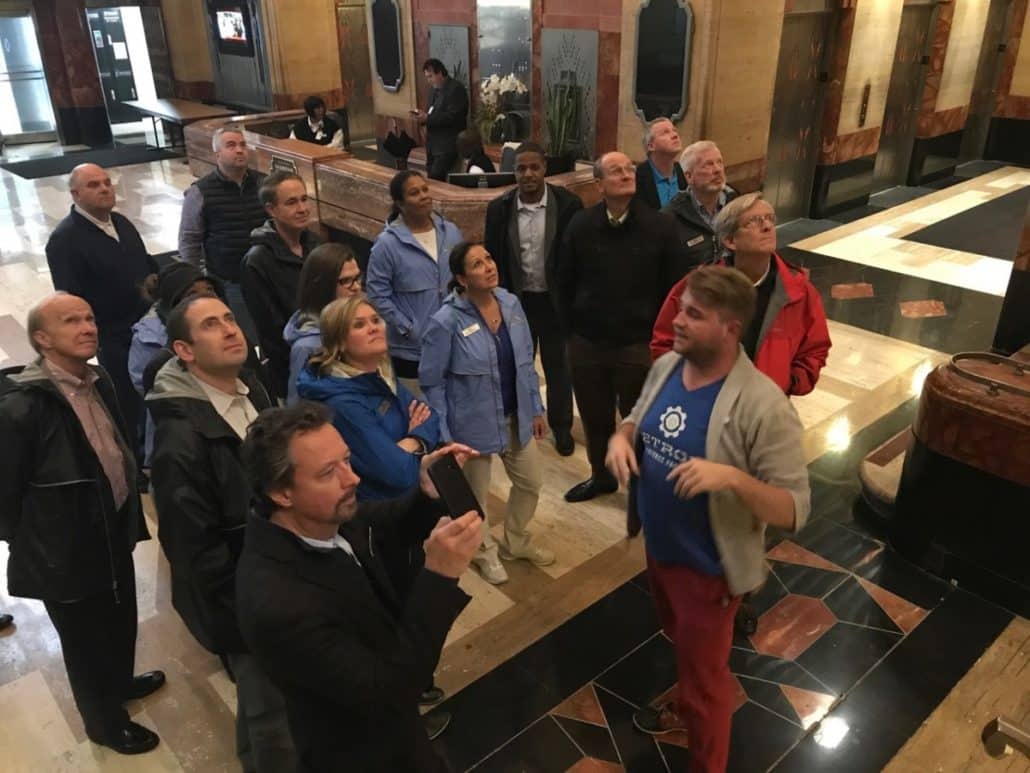 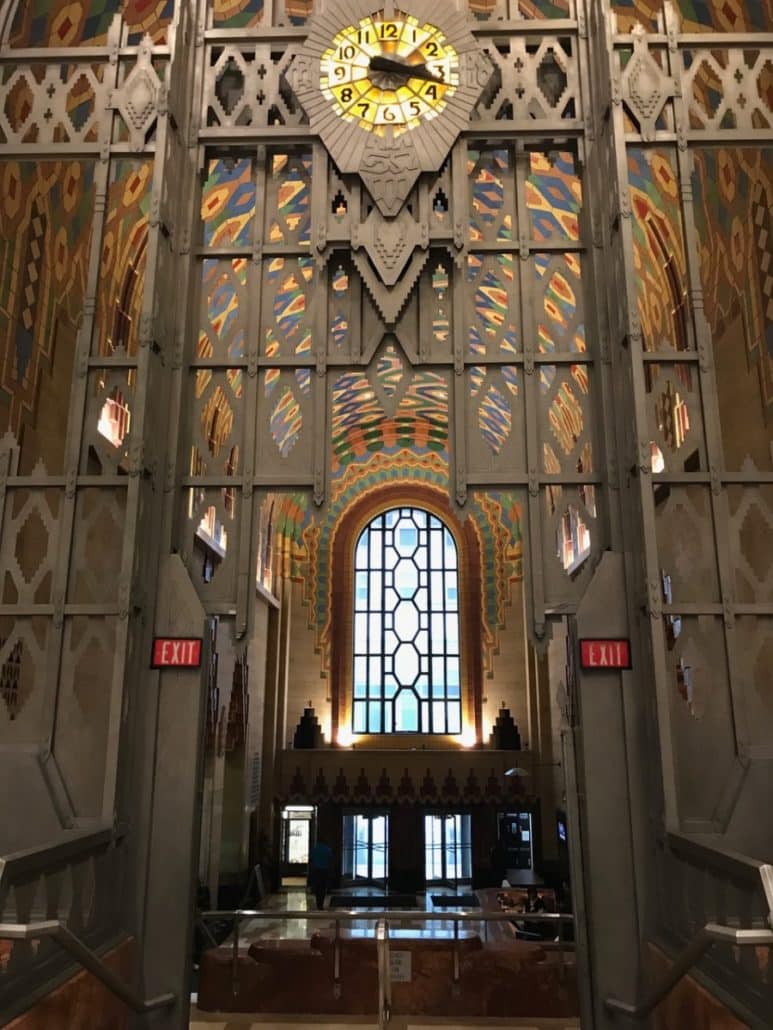