Archbishop Desmond Tutu with Coca-Cola executive Carl Ware during one of Tutu's visits to Atlanta. (Special.)

“Desmond Tutu called Atlanta his second home,” Carl Ware, co-chair of the Atlanta Tribute Committee, said in an interview Wednesday. “This event is aimed to be transformative and designed to promote resolution, peace and racial reconciliation in Atlanta and beyond Atlanta.” 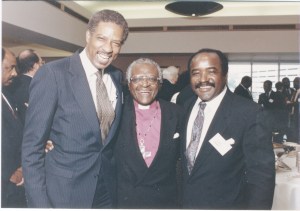 When Tutu died on Dec. 26, 2021, in Capetown, Ware and his wife Mary were planning to travel to South Africa for the funeral. Tutu’s widow, Leah Tutu, urged them to stay home and help put together a celebration of Tutu in Atlanta instead.

So, Atlanta civic, political, business and religious leaders in January began planning for the “Tutu Legacy Lives in Us” event which will be held about a week before Tutu’s Oct. 7 birthday, when he would have turned 91. Over the last nine months, the steering committee planning the tribute and raising money for the event.

“We got enough money to put on the tribute, and we have enough funds left over to kick off the Desmond Tutu Atlanta Legacy Project,” Ware said. “That’s a unique partnership between Emory and Clark Atlanta University.”

The plan will be to have two Tutu Fellows at Emory and two at Clark Atlanta — a lasting legacy for someone who meant so much to Atlanta and the world. Ware said the steering committee has raised about $600,000. 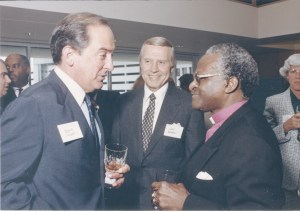 “As a champion for peace and justice, it is no surprise Archbishop Tutu found a second home in Atlanta,” Atlanta Mayor Andre Dickens said in a statement. “I could not think of a more fitting place outside of South Africa to honor the legacy of such an extraordinary man with an unwavering moral compass than right here in the cradle of the Civil Rights Movement.”

The event will reflect and illuminate Archbishop Tutu’s human rights activism and transformational message of restorative social justice and reconciliation.

It will feature musical performances from the world-renowned Ndlovu Youth Choir of South Africa and a line-up of dynamic speakers, including Dickens, former Atlanta Mayor Andrew Young, former Chairman and CEO of the Coca-Cola Co., E. Neville Isdell and the current presidents of Clark Atlanta and Emory universities.

Bishop Michael Curry will conclude with a powerful call to action to take a collective pledge to realize Archbishop Tutu’s legacy of unity. The committee hopes it will be able to raise $1.3 million to fully fund the Tutu Atlanta legacy project. 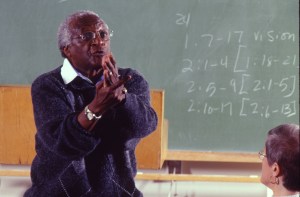 Ware, now a retired Coca-Cola executive vice president, formed a special bond with Tutu when they first met in October 1985. The two men met to design the Coca-Cola strategy to divest its assets from South Africa until apartheid ended.

“From my perspective, it was clearly the pinnacle of my career,” Ware said. “The contribution I made to the abolition of apartheid working alongside Desmond Tutu, and then eight years later working on the re-entry of the Coca-Cola Co. in South Africa alongside Nelson Mandela — that helped change the Coca-Cola Co.”

Ware explained that Coca-Cola mogul Robert W. Woodruff wanted the company to be welcomed in every country where it did business, so it refrained from taking political sides. 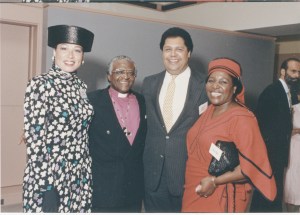 Tutu’s connection to Atlanta grew deeper when he became a visiting professor at Emory University’s Candler School of Theology from 1991 to 1992, and then again from 1998 to 2000. Tutu also received honorary degrees from Emory, Clark Atlanta and Morehouse universities.

In fact, one of Tutu’s daughters lives in Atlanta — so that special relationship continues.

Tutu was a champion for justice and a promoter of peace. He helped nations heal their divisions through restorative social justice and reconciliation. His beliefs were rooted in the African concept of Ubuntu — that “your humanity is bound to my humanity. What happens to one of us happens to all of us.”

The tribute event is designed as an opportunity for the people of Atlanta and people across the nation to keep Tutu’s legacy alive by pledging to pursue reconciliation in their communities.

Ware said he can’t think of a city better situated than Atlanta to carry on Tutu’s messages of peace and reconciliation. Click here for more about Tutu’s tribute.