A delegation of 100-plus Atlantans just landed today in Minneapolis-St. Paul for the annual LINK where local leaders will explore how other cities address a variety issues facing the region.

“This is why our airport is so clean,” DeCosta said holding up his little digital camera. And he complimented the Minneapolis airport for its cleanliness, unable to find trash on its floors.

Center in St. Paul where it is going to hear from St. Paul Mayor Chris Coleman. The group also will get a briefing on the “tale of the Twin Cities” and get a profile of the region.

On the charter flight operated by AirTran, much conversation focused on fellow passenger Vance Smith, chairman of the House Transportation Committee, who has just disclosed that he’s making another run to become the commissioner of the Georgia Department of Transportation. 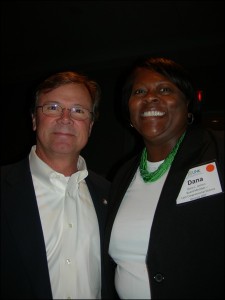 Smith lost his first attempt for the job by one vote. The board opted to name Gena Abraham Evans to that post, but she was outsted by the DOT board earlier this year. The department’s chief engineer Gerald Ross was named as interim commissioner.

“it’s important that the GDOT board name a commissioner that will allow us to have a consensus so that we will not have any contested races decided by one or two votes,” said Decatur architect Robert Brown, a DOT board member who is on the three-person search committee. “That will allow the department to support the new commissioner with the focus on being successful.”

Brown has been on all 13 LINK trips.

By the way, this is the third year that AirTran has been flying the LINK delegation to its destination.

The Atlanta Regional Commission, which organizes the trip, puts the flight out for bid; and AirTran has outbid Delta Air Lines for the last three trips to Vancouver, Denver and Minneapolis.

It’s particularly interesting that Delta did not win the business this year. With Delta’s acquisition of Northwest Airlines, Minneapolis is one of the airline’s top hubs.