A night view of Chicago's skyscrapers reflecting on the water (Special)

The Chicago LINK trip is back on.

After having to skip the planned 2020 LINK trip to Chicago because the COVID-19 pandemic, the Atlanta Regional Commission will be sending its first batch of invitations early this week to regional Atlanta leaders to go to the Windy City from Oct. 27 to Oct. 30.

This will be the second time LINK will have visited Chicago. In 2002, about 100 regional leaders visited Chicago in one of the most impactful LINK trips to date. Then Atlanta Mayor Shirley Franklin had just been elected, and she leveraged the LINK trip to forge regional alliances with leaders from ARC’s 10-county region. 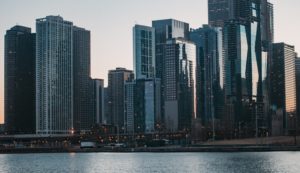 The 2002 Chicago LINK trip led to the formation of the Metro Atlanta Mayors Association (MAMA), which still exists today. Then Chicago Mayor Richard Daley told Mayor Franklin that he had reached out to all the other mayors in the region to develop a closer working relationship to address regional issues. Franklin jumped on the idea and became the first chair of MAMA.

Chicago also gave metro Atlanta leaders to see how a strong mayor form of government could improve the quality of life in the city – such as parks, the arts, sidewalks and lively street life.

“Our projected 2050 population would make metro Atlanta roughly the size of where Chicago is now,” Hooker said in an interview explaining the choice of Chicago. “We are projected to have 8.6 million people in 2050, and Chicago currently has 8.3 million. There are lessons we can learn.”

Mike Alexander, ARC’s senior director of the Center for Livable Communities, said the 2021 trip will explore how Chicago has been addressing the issues of equity. The Atlanta region and the state used Chicago transportation governance structure as the model for the creation of the Atlanta-Region Transit Link Authority (the ATL).

Originally, the Chicago LINK trip had been planned for May 2020. Then ARC leaders tentatively scheduled it for August 2020 on the hope the pandemic would be under control. But the health and safety of invitees was paramount, so ARC decided to postpone it until October 2021.

The timing of the 2021 LINK trip might prove problematic for candidates running in the November local elections. Chicago Mayor Lori Lightfoot has tentatively agreed to meet with the LINK delegation. Atlanta Mayor Keisha Lance Bottoms has been invited to attend as has Atlanta City Council President Felicia Moore (who serves on ARC’s board), but they are both running in the 2021 mayoral race, which will take place days later on Nov. 2. Former Atlanta Mayor Shirley Franklin has been invited to go on the trip, and she is expected to attend.

“We are reinviting the people who indicated they wanted to attend last year,” Hooker said.

The highly-sought-after LINK invite will begin with the folks who were supposed to attend last year, and then invites will go out to a broader circle based on availability.

Right now, the plan is to have a total of about 100 people on the LINK trip.

“We have the aspirational belief that the pandemic situation in Chicago will be under control by October,” Hooker said. “We are going to do everything we can based on good public health guidance. We may need to tweak some of our plans, depending on what happens.”

Melissa Roberts, ARC’s leadership programs manager who is coordinating the LINK trip, explained why they decided to move forward with the October dates.

“The hotel already had limited availability in October,” she said. “That’s a positive sign about the situation opening up. We are confident we will have great health and safety procedures in place for the trip.”

“We should be okay,” Alexander said. “Everyone is excited to be able to resume this activity.”