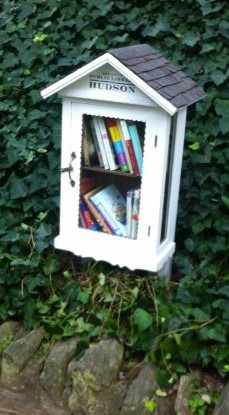 As the country’s largest independent book festival sets up in Decatur this weekend, don’t let a faceless software like Amazon tell you what to read.

Tap into a network that’s both older and newer, more personal and just plain more fun: the Little Free Libraries that are popping up all over Atlanta.

Resembling large birdhouses, the Little Free Libraries are weatherproof cabinets with a couple of dozen books inside. Borrow one, read it, bring it back, or bring another. No cards, no fines.

It’s the charm of yard art, the wonder of a message in a bottle, sprinkled with the spell cast by a deft writer.

“What a great concept and I’m pleasantly surprised no one has decided to empty the library’s contents – or do damage to the library itself,” said John Becker, who discovered “The Little Public Library on Hudson” while walking his dog in Virginia Highlands recently. A national registry lists 13 in Georgia with their GPS coordinates, but the Hudson one and others are not yet listed.

Like every big library, these small ones are built on stories. The Little Free Libraries mark personal tales of love: of people, books and the world, and the power of a story to change us all.

Patrick Edmondson, a teacher who lives in Lake Claire, built his LFL to honor his friend Brother John, a Rasta elder who had died at 91. 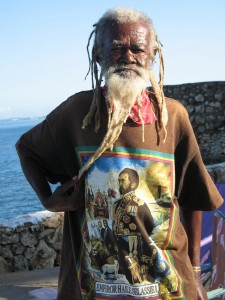 Brother John, a Rasta elder whose influence led to Patrick Edmondson’s creation of a Little Free Library in Lake Claire.

Brother John “was a very spiritual being,” Edmondson recalled. “Because he had no opportunity for formal education, he knew its value. He called me ‘Teach’ and spoke of what a great good for the world it was to pull back the curtain of ignorance each in our own way. My way was the way of books and I must spread that love. Thus I combined the two motivations in one little box.”

The library also recalls his grandmother, a teacher at Morningside Elementary School when “it was a one room schoolhouse. She came from a line of German educators and taught me to read very early. 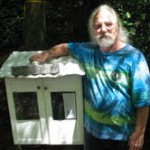 Patrick Edmondson and his Little Free Library in Lake Claire.

It has always opened worlds for me… A book can be a shared passport. How many of us walked Middle Earth long before any movie?”

Little Free Libraries have surpassed the 2,509 free libraries built by Andrew Carnegie. This movement began in 2009 through two friends in the Midwest, Todd Bol and Rich Brooks, who shared a connection through small businesses, green practices, service and the “quality of community life around the world,” according to their website. They also sought to honor their mothers, who were librarians.

As their structures spread, so did the warmth represented and bound by books.

“This is a safe street filled with friendly, thoughtful people,” is the community statement behind David Laufer’s Little Free Library near Druid Hills Road in northeast Atlanta.

He dedicated it to Anson Eugene Laufer, the father who read to him every day, favoring nonfiction exploration and adventure books.

“I especially liked James Thurber’s ‘The Thirteen Clocks’ … full of wordplay, inverted archetypes and a character named the Golux, who is sort of like an alter ego to me.”

Little Free Libraries have caught on during the era of e-books, in the space left by literature that is no longer on the printed page, and by the growing dearth of independent book stores.

The popularity of mini-libraries “speaks to the very special thing that a physical book does that an e-book does not, and that’s the giving away of it,” said Decatur Book Festival co-founder Daren Wang. 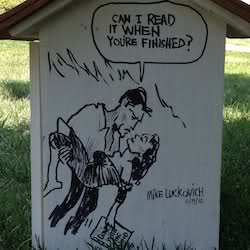 AJC editorial cartoonist and Pulitzer Prize winner Mike Luckovich provided artwork for a Little Free Library that is being auctioned this week at the Decatur Book Festival. (Rhett Butler to Scarlett O’Hara: “Can I read it when you’re finished?”).

“Digital rights management requires that an e-book belongs to one I.P. address or Kindle. What the Little Free Library does is allow a way for people in a way that is very quiet and thoughtful, say, ‘This is what you should read.’ “

The festival on Saturday and Sunday will feature an auction of Little Free Libraries on the Decatur Square, with entries decorated by local notables such as AJC editorial cartoonist Mike Luckovich and the street artist Catlanta.

Just south of the square, Jennifer Curtis, a resident of East Lake and a mom, focused on the Little Free Library in the wake of city school redistricting. So did other families, and now East Lake has a series of these book nooks.

“The Little Free Libraries were a distraction [from the politics of redistricting] and an opportunity to do something positive for kids,” Curtis said. “They are very contagious. Once you get the idea, it sticks with you …and people warm up to it very fast.” 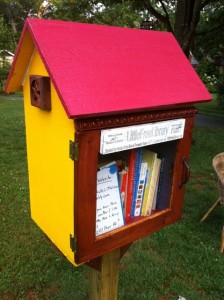 Some literary Grinch took all of her little library’s books, making room for even more community.

“The people in the neighborhood refilled it,” she said. “A lot of people worry about that [vandalism], but being open and accessible is what it’s all about. It’s as much about community having an excuse to be together and talk to each other.”

The Little Free Librarians have created a growing network of peers across the country and world who love books on a micro-scale. Curtis received a book (“The Immortal Life of Henrietta Lacks”) from a stranger in Alaska, who explained that while she could not build her own Little Free Library, she wanted to donate to ones in locations that were personally significant to her. 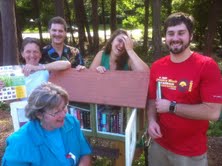 That circulation makes sense to Laufer: “If you think of our civilization as an organism, then books are like its blood cells, carrying nourishment to all parts of the body.”

A computer will forever spit out a list of “Customers Who Bought This Item Also Bought….” But for those of us who want books that tell us stories about our neighbors’ tastes and experiences, and bring us into conversation and community, here’s a recommendation: Little Free Libraries.