As historic buildings disappear, Atlanta losing its sense of place

Atlanta can be such a disorienting city.

One day a building can be standing on a corner waiting for you like an old friend.

And the next day it’s gone. No warning. Just gone.

That’s what happened to me a few weeks ago when I was driving on Ponce de Leon Avenue going west towards Peachtree Street. A vacant lot at Juniper Street hit me in the face where a familiar building once stood.

The first office building ever designed by world-renowned architect I.M. Pei had vanished — just like that. Once again, Atlanta had erased an important part of its physical history with barely a whimper. 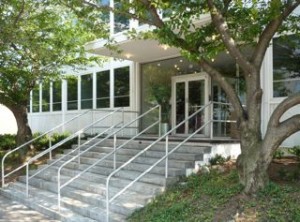 The two-story modern-style structure was built in 1951 as the Gulf Oil Building. Over the years, there had been talk that developers wanted to build on that block. But almost always they would talk about keeping at least part of the Pei building as part of their development.

Mark McDonald, president and CEO of the Georgia Trust for Historic Preservation, first became concerned in mid February when he noticed unusual work occurring on the site.

“The removal of the marble panels from under the windows substantially changes the character of this building and diminishes its significance because it alters the design of one of the world’s greatest living architects,” McDonald wrote in an email to his members. “It is disappointing that the building has not been landmarked by the City of Atlanta and due to this inaction, it has no legal protection against partial or full demolition.” 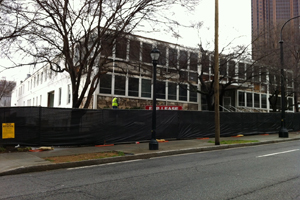 Within a couple of weeks, the whole building had been leveled. An apartment development is now under construction on the block, and yet the owner of the site destroyed the very thing that had made the property valuable — a priceless, irreplaceable work of architecture.

It’s enough to drive you crazy if you’re from Atlanta. Block after block is filled with ghosts of buildings past. Your mind begins to play tricks on you as you try to remember a piece of history that’s been replaced by a surface parking lot waiting for that next wave of frenzied development.

McDonald observed that it’s been a hard winter for historic buildings in Atlanta. In December, the McCord Apartments on Seventh Street near Peachtree Street — designed by famous Atlanta architect Neel Reid in 1923 — were demolished. For pictures on the McCord demolition, please click here. 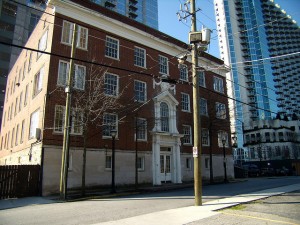 Preservationists lost a multi-year legal battle with the Georgia Tech Foundation to preserve most if not all of the historic Crum & Forster building.

And although preservationists were able to prevent the demolition of the Atlanta Daily World building on Auburn Avenue, until it has been given new life — an economically sustainable renovation and reuse — it’s too early to celebrate.

In short, Atlanta does a pitiful job in protecting and preserving its most historic buildings. And it shows. Too often the city looks and feels disposable, temporary, dispersed and incomplete.

Back in 1991, I.M. Pei made a similar observation when he came for the opening of Wildwood Plaza, an office building he had designed for Cousins Properties in Cobb County.

At the time, Pei observed that one of Atlanta’s weaknesses was its decentralization.

“The great cities are not to be seen upon perimeter roads,” Pei said. “Usually, before you expand to the perimeter, you should have a substantial core. Your core must be healthy.”

Pei went on to say: “There’s still a lot of property downtown that could be developed. That may reflect some political and social problems you have. Perhaps the core of Atlanta will be the next project for this city to concentrate on.”

In recent trips to Chicago, Reed was impressed.

“The city is so clean,” Reed told Daley listing off several items he liked about Chicago. “The quality of buildings that are there. People are always outside. You can feel the city’s confidence. How did he (Daley) influence the kind of buildings that are built in his city — the private sector buildings. You see that on Chicago’s skyline. The job that’s been done in that city is special.”

What Chicago has done for decades is respect its built environment — it has honored its architects and architecture; it has made its sidewalks desirable places for people with wide vistas adorned with flowers, trees, plantings and art; it has paid attention to design and detail — welcoming the new without obliterating the past.

“We are not competing with one another,” Daley said. “This is one of the greatest cities in the world. This city is moving forward. It’s willing to take risks. You keep working at your vision.”

A good place to work on that vision is by placing much greater importance on our sense of place — providing lasting landmarks that will define our city for decades to come.