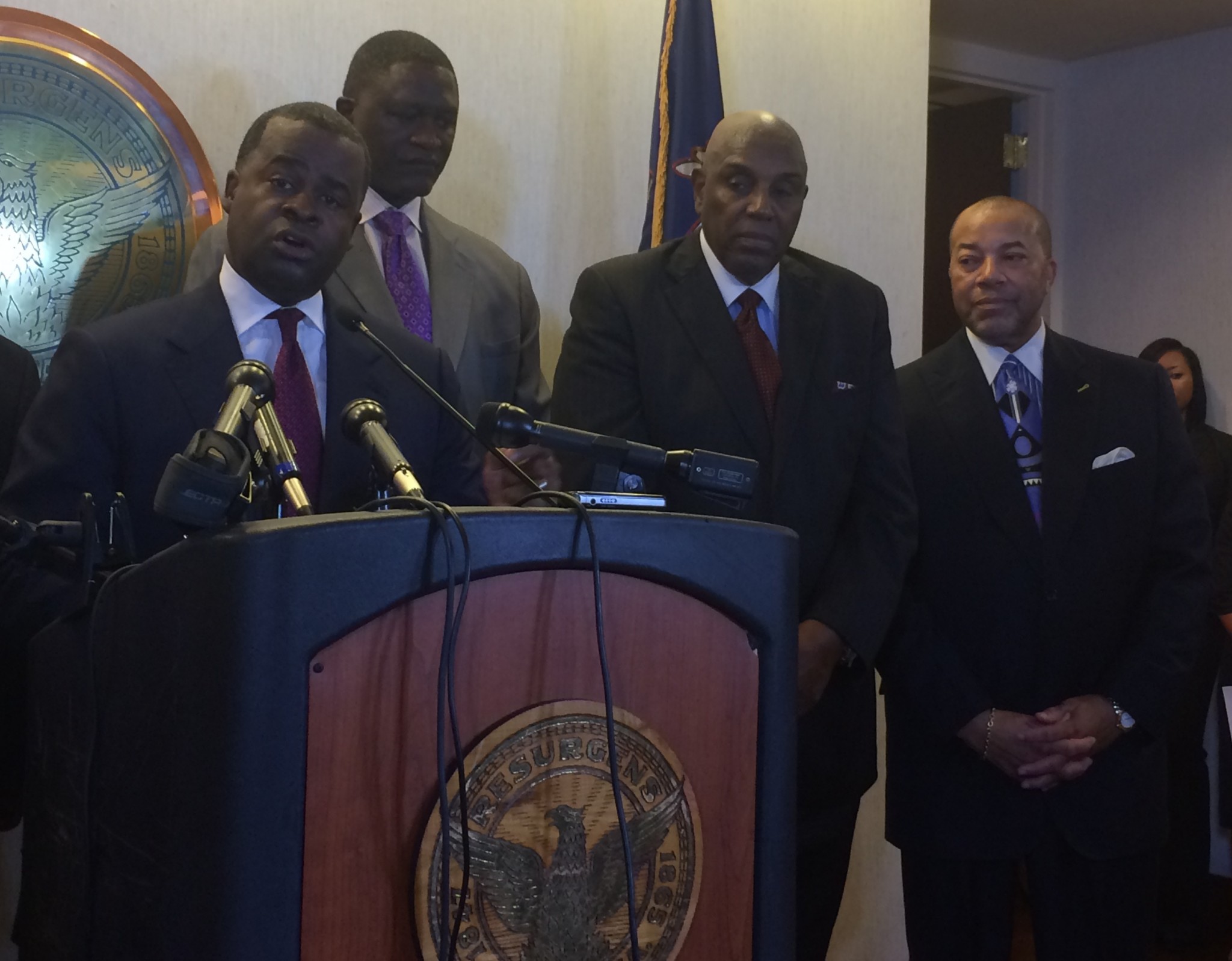 Before flying up to New York City to meet with NBA Commissioner Adam Silver, Atlanta Mayor Kasim Reed said he was optimistic the Atlanta Hawks would be in good hands based on the number of potential owners he has talked to.

Reed made his comments in an interview with only two reporters following the quarterly meeting of the Atlanta Committee for Progress, a blue-ribbon panel of business leaders that is advising the mayor on key city initiatives.

“It’s proceeding really nicely,” the mayor said about developments related to the Atlanta Hawks. “I have been visiting with people have an interest in purchasing the Hawks. I have remained highly confident that we will get a long term commitment to the city of Atlanta (from the new majority owners of the team).”

The mayor said the NBA has a “rigorous” process over who can become an owner of an NBA franchise, and he said that “they have retained the services of an investment banker” to help find a buyer. The mayor said he did not know the name of that investment banker, but he would probably have more information after his 3 p.m. meeting with Silver on Friday afternoon.

Officially, Bruce Levenson is the person who is at the center of all these proceedings. Levenson announced in early September that he would be selling his interest in the Atlanta Hawks. He and his Washington, D.C. partners control 50.1 percent of the team (Levenson directly owns 24 percent). and that is the only portion he can sell.

Given that Levenson holds the cards on hiring an investment banker and deciding on who he will share his interest in the team, the mayor was asked what he hoped he would be able to accomplish in his trip to New York to meet with Commissioner Silver.

“I think you are understating the leverage that the NBA has in this process,” Reed said, adding that he believed that in the end Atlanta would get a nice combination of owners committed to Atlanta and the team.

The mayor said he continues to have meetings with people who are interested in buying the team and he is confident of their ability to pay what the team is worth – at least pay for Levenson’s share of the team.

“What I’m certain of is that we have the financial firepower and where-with-all that is interested in purchasing his (Levenson’s) interest in the team,” Reed said, adding that four of the six prospective owners he has talked to have expressed a strong interest in having significant minority representation on their ownership team.

“They have talked about it being 5 percent owned by people of color,” Reed said.

One Atlanta legend who is open to owning a piece of the Atlanta Hawks is baseball hero Hank Aaron.

When it first became public that the team might be for sale, Aaron’s business partner Victor Haydel made some inquiries and quickly realized that they probably would not be able to take a majority position because of the dollar amounts involved.

But Haydel said Aaron remains interested in exploring the possibility of being part of an ownership team and being part of a larger group that owned the Atlanta Hawks.

Levenson decided to sell his interest in the team after it was reveal that he had sent a racially-charged email two years ago about the concern that Atlanta Hawks needed to cater more to its white fans and that an arena with a majority of African-American patrons was frightening to its white attendees.

The NBA has been under intense scrutiny ever since a recorded conversation between L.A.. Clippers owner Donald Sterling and his off-and-on-again girlfriend was revealed in April where he objected to her bring black men as her escort to basketball games. His comments were considered unfit for the NBA, and he ended up selling the team for about $2 billion – the highest sales price of an NBA team in history.

After Levenson disclosed his email, it was reported that Hawks General Manager Danny Ferry had also made some derogatory remarks in a June conference call among owners about free agent prospect Luol Deng having a “little African in him” among other comments.

Ferry has since been put on an indefinite leave of absence.