Mayoral candidate Felicia Moore on the upper floor of the Georgia Beer Garden on Edgewood Avenue at an event on Sept. 28 (Photo by Maria Saporta)

The city’s crime continues to dominate the Atlanta mayor’s race.

Mayoral candidate Felicia Moore, president of the Atlanta City Council, unveiled a multi-pronged platform to combat crime at a press conference Friday morning in front of Grady Hospital. She discussed her plan in an exclusive interview a couple of days before the press conference to elaborate on the five “C’s” – children, cops, courts, code enforcement and community.

“There is not one silver bullet approach to this,” Moore said, adding there needs to be a comprehensive approach to make sure citizens are safe and feel safe. “Perception is reality. And when people don’t feel safe, that is a primal force that makes you sort of blank out everything else.” 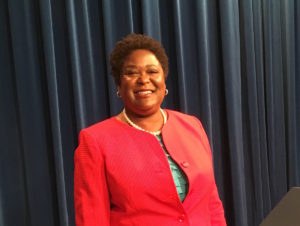 In her prepared remarks for the press conference, Moore share her personal experiences with crime as well as her ideas for addressing Atlanta’s rising crime rates.

Our city is suffering from a devastating crime wave,” Moore said of the more than 110 murders that have happened this year along with rising incidents of rape, assault and theft. “We can’t just arrest our way out of this crisis.”

Moore, who called for the creation of a “21st-century police department” where officers are “guardians of our community, not warriors against crime,” said she would hire a new police chief and a human resources director to recruit and retain officers.

“We do need more officers, but that alone isn’t enough,” she said. “We need to create trust between the community and the Atlanta Police Department.”

Moore also said the city would focus on the root causes of crime, such as poverty and a lack of opportunity – especially when it comes to children. She said the city would partner with the Atlanta Public Schools and other organizations to “end the school-to-prison pipeline” and provide after-school and job training programs.

Saying she would have one-on-one conversations with police officers, Moore said she would seek to boost morale at APD by recognizing police officers have a tough job. To help build back the force, she would offer incentives to recently retired officers to come back to work until new officers are hired and trained.

At the same time, Moore said she knows there are disparities and unfortunate interactions between some police officers and the public.

“My own father, a union member, an assembly line worker, and eventually a school committee member, and one of the kindest people I’ve ever known, was savagely beaten by police after a traffic stop on his way to pick up my mother,” Moore said.

“I know that not every officer is bad. I know we need police in our community to keep us safe. But we also need to change how we police our city,” Moore added. “We’re going to break down the blue wall of silence that allows a few bad cops to bring shame on the badge.”

She would establish a confidential reporting system, and she would remove the police internal affairs office from within the police department to protect officers from retaliation.

Meanwhile, she would keep the Atlanta City Detention Center open and partner with Fulton County to help alleviate overcrowding at the county jail.

“I went to the Rice Street jail, and it brought me to tears,” Moore said. “It is deplorable with people sleeping on the floor, it just is inhumane.” 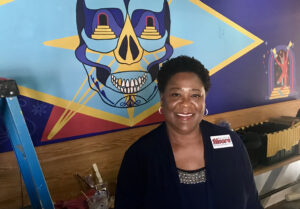 Mayoral candidate Felicia Moore on the upper floor of the Georgia Beer Garden on Edgewood Avenue at an event on Sept. 28 (Photo by Maria Saporta)

At a minimum, she would lease 500 beds to the county. And she would explore longer-term solutions to either lease or sell the Detention Center to the county as long as the city could continue to use some of the beds for people who violate city offenses.

When it comes to code enforcement Moore said some businesses are repeat offenders, whether it is serving alcohol to minors or violating the noise ordinance.

“Nearly half of our code enforcement jobs are vacant, and we have a three-year backlog of violations,” she said. “We’re going to fill those jobs and clear that backlog immediately.”

Moore said it was the city’s nightlife that first drew her to Atlanta.

“Food, arts, entertainment, and nightlife are economic engines for our city,” she said, adding that a “few bad actors” are negatively impacting those who follow the law. “We need to enforce the rules so every restaurant, recording studio, and night club are playing by the same rules, and everyone has a fair shot to succeed, not just the well connected.”

Moore also pledged to open a new “no questions” homeless shelter where people could get services without judgement, such as treatment for mental illness and drug addiction.

It is all part of her plan to create a safer city, both now and for the long term.

“The first priority of an elected official, particularly the mayor of the city, is to make sure people in the city feel safe,” Moore said. “I love Atlanta with all of my heart. I would not be running for mayor of this great city if I didn’t believe with all of my heart that we can break the cycle of crime and violence together.”