Late to the party on Friday, I was greeted by a midnight blue Atlanta police cruiser, the glow of fire blossoming where cops would traditionally stash suspected criminals. Within minutes, the blaze matured to engulf the entire car, searing away its paint job and igniting the explosive chemicals that churn beneath the hood and behind the chassis of any gas-powered automobile.

So, around 8 p.m., I was jolted to the understanding that the story I’d planned and perhaps hoped to write — What Atlanta can teach the country about peaceful protest — died in the inferno before me. The heart of the so-called Black Mecca — the “city too busy to hate” — was being torn limb from limb by the fringes of a march for justice that kicked off in the expected peaceful fashion that’s been championed by the legends that birthed the civil rights movement on these very blocks — these blocks that ended up littered with pummeled window glass that crunched beneath the feet of protesters, police, and journalists, pockmarked by tear gas grenades volleyed at unruly crowds, and adorned with enough new paint — graffiti that almost always said something to the effect of “Fuck the Police” — to turn the force’s torched cop cars blue again. 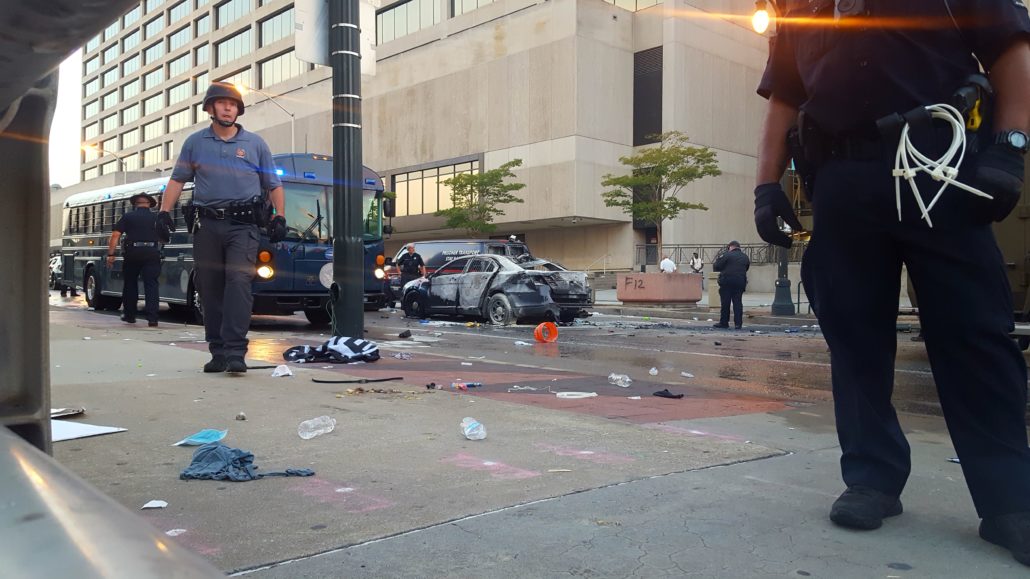 It is not my role to endorse or condemn what Friday’s demonstrations in downtown Atlanta evolved — or devolved — into. As a white man — one who’s long appreciated and, at times, resented the privilege of his upbringing and his race — I can never understand racism and police injustice through the eyes of a person of color. I could never fathom the fire that brews within people who all too often see those who look like them abused, assaulted, and killed by the people who are tasked with protecting and serving everyone, regardless of their color, class, or credo.

Still, I held higher hopes for Atlanta as I wheeled my bicycle up toward the CNN Center, which was then serving as the frontline for a volatile clash between police and protesters. Tensions high, the crowd tired and battered by the departing sun, the scene on Centennial Olympic Park Drive, near the Marietta Street intersection, shifted quickly after police attempted to restrain the roving masses. Some theorized later on social media that the tranquility of the protest would have survived, had it not been for cops trying to wrangle demonstrators and shut the operation down. Others, though — including Atlanta Mayor Keisha Lance Bottoms — lamented that the proverbial wrecking ball that spawned from the uproar paid no favors to the protesters’ cause. 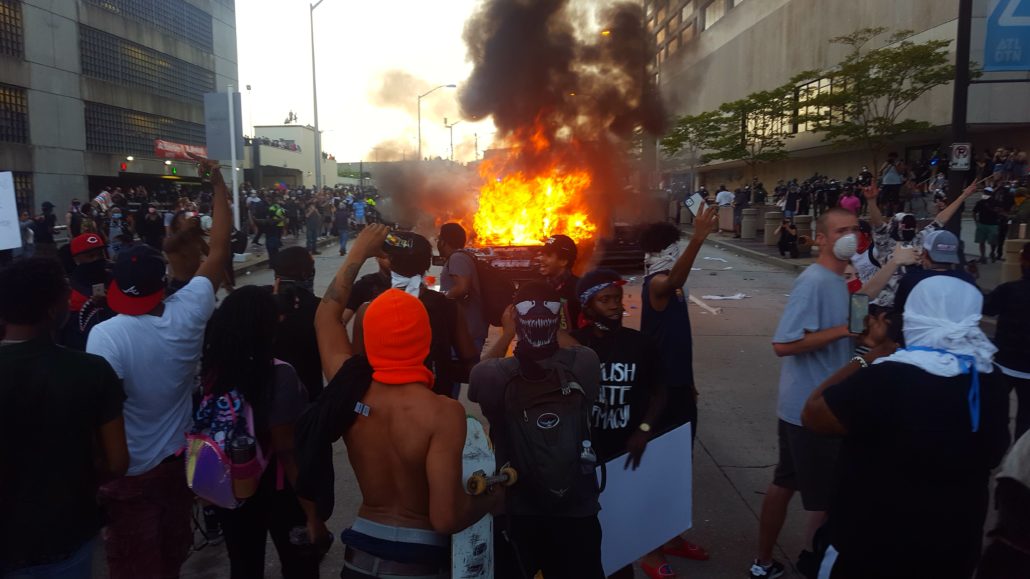 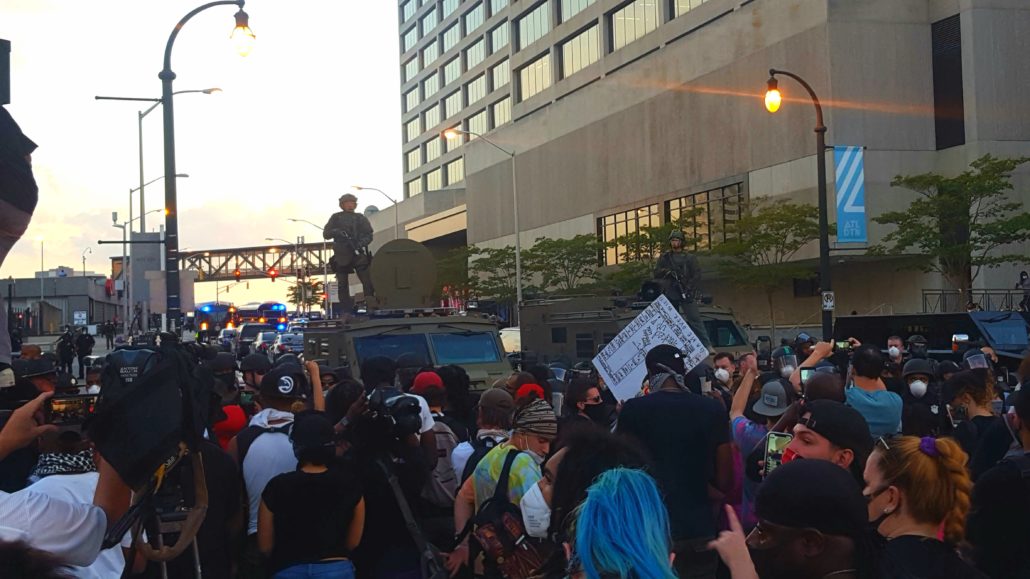 Outnumbered, police dispatched pepper spray and tear gas grenades, sending protesters and journalists alike into coughing fits — certainly the last thing a community needs in the midst of a viral pandemic — and scrambling for the refuge of cartons of milk, which people used to wash the poison from their eyes. Soon after the first volley of tear gas, outside the CNN Center on Marietta Street, another cop car less than a block from the Chick-Fil-A College Football Hall of Fame went up in flames. Then, another after it. It was difficult to distinguish the expected explosions of the gas tank and other below-the-hood components from the pops of fireworks barking not just overhead, but in the street, too.

When firefighters — and, of course, more cops — arrived to douse the blaze, tear gas made an encore, confusing and panicking the few motorists who were desperately trying to navigate the already crowd-clogged roads. It was chaos. But it was important chaos that represented a deep yearning to reform the systems in this country that have for decades put down people simply striving to realize the American dream.

And it is crucial, I believe, to note that the destruction that followed an otherwise beautiful display of the right to assemble and speak freely was not indicative of the goals of those who organized the march. What disappointed me was the disarray that stemmed not just from the actions of a small collective of aggressive demonstrators, but also the response from police, who could be charged with antagonizing the developing situation. 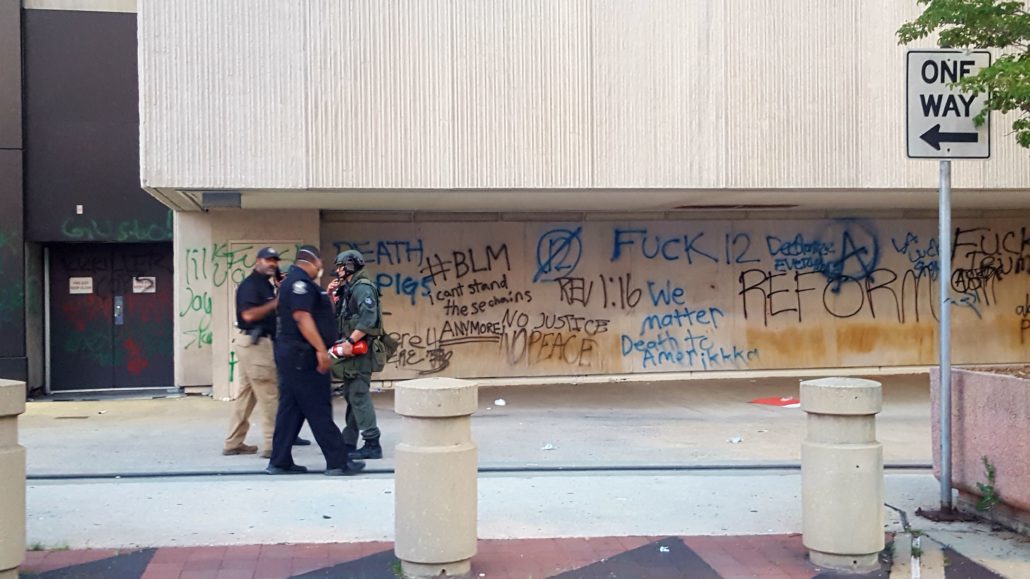 Though few and far between, instances of police siding with protesters cropped up across the country over the past few days. A sheriff in Flint, Michigan, for instance, stripped off his riot gear, set down his cudgel, and marched with the people who were calling foul on others in his profession. Police in a New Jersey town followed suit, pumping down city streets while holding protest signs alongside advocates for justice.

One Atlanta cop, a black man who in a video posted on Twitter said that he has two sons, said, “I have to have these conversations [about race] with them all the time.” He, too, was disgruntled by the response of his colleagues. “What was going on up here was wrong,” he said, nodding to the cops’ deployment of loudspeakers meant to irk and disperse the crowd. “Let these people remain here. Let them stay here in the street. Let them express their grievances, because they have a right to be pissed off,” he said.

So, as Mayor Bottoms begged protesters during a Friday press conference to head home “if you love Atlanta,” observers might have wondered why more of the Atlanta Police Department — a force surely marked by its own past misdeeds, but one that has traditionally helped usher peaceful protests — didn’t join hands with demonstrators who were so rightfully aggravated by the misconduct of law enforcement in cities across the country.

Some @Atlanta_Police officers appear to strip off riot gear and join hands with protesters. https://t.co/xRcv5TcR4d

The people who scarred our streets and local businesses did not represent the masses that convened to spotlight rampant injustice. Likewise, it seemed, the police who blinded and choked protesters with tear gas and pepper spray didn’t represent the sentiment of unity broadcast by APD Chief Erika Shields, who embedded herself in the rally on Friday evening to validate the grievances of people marching. “If I had a magic wand and could wave it,” she said, “I would have the economics of Atlanta better distributed, because the reality of it is we are so segregated economically and racially, and these issues [of police injustice] just further compound themselves.” She was referring to Atlanta’s daunting income inequality and mobility issues, which have for decades systematically kept poor people of color where they are on the socioeconomic ladder.

Surely, the Atlanta Police Department cannot be tasked with overcoming such deep-seated problems on its own. But the force also cannot keep the peace adequately when it attempts to build a wall between justice-hungry protesters and their hard-to-reach finish line. Justice, after all, will not manifest overnight. It is a journey, not a destination. And, from where I’m sitting, there is no room to criticize the chaos when pacifist efforts to march in the streets — or, God forbid, kneel down during the national anthem — are met with vitriol from cowards hiding behind Internet screen names or uninformed public officials settled on cushy soapboxes.

Where we go from here remains uncertain, but there’s something comforting and promising about the prospect of an APD officer ditching their riot shield and gas mask and tear gas grenades to wield instead a picket sign emblazoned with “Black Lives Matter.” Until then, though, the morbid song of squad car sirens and clicking handcuffs shall ring too loud.