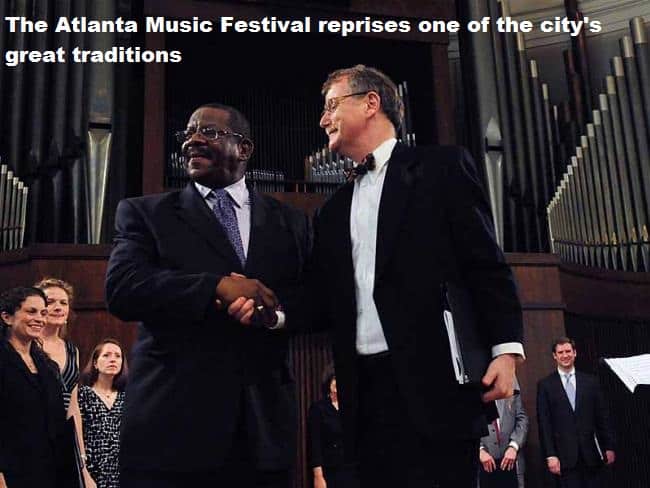 This week, GARY HAUK, university historian and senior adviser to the president at Emory University, reflects on the Atlanta Music Festival and its tradition of building unity through the arts.

It’s a little-known secret that while Atlanta may have been “the city too busy to hate,” it has also been, for more than a century, a city too cultured to divide. The people have come together for art and music, theater and dance, just as much as for any baseball game or gridiron rivalry. The arts have brought together Atlantans from every neighborhood who otherwise might have little occasion to gather.

One instance of this phenomenon will be on display for the umpteenth time on November 18, when the historic Atlanta Music Festival mounts its concluding gala concert at Glenn Memorial Auditorium on the Emory University campus.

Born out of chaos and violence, the festival harks back to 1910, when a black minister, Henry Hugh Proctor, drew from his background in classical music to create a bridge between music-loving black and white communities. Although it persisted for just eight years, the Atlanta Colored Music Festival, as it was called, made way for healing in the wake of the devastating 1906 Atlanta race riot. The interracial collaborations forged then through music would bear fruit decades later.

Reviving this tradition in 2001, black minister, musician, and professor Dwight Andrews and white church music director Steven Darsey have fostered a vision of the arts as an engine for interracial understanding and social transformation. The Nobel Prize Committee this year may have recognized the power of Bob Dylan to speak for a generation. But no less powerful, though often unheralded, is the more subtle impact from exposure to different artistic and musical traditions. Somehow under the dance steps, behind the stage scenes, over the floating musical notes, in front of the canvas is born a shared experience that gives people of every variety a common experience to begin a conversation.

The Reverend Henry Hugh Proctor studied the theology of slave spirituals at Yale Divinity School. Courtesy of the Library of Congress

Offering a free after-school program and a free two-week summer camp, the conservatory teaches students in fourth to sixth grades to play instruments, study music theory, and receive instruction not available to them otherwise. The students hail from metro Atlanta area schools and community programs.

As Andrews, a professor at Emory, has put it, “With an ear to voices that have not been heard, [we] are striving to create a musical world of reconciliation and empowerment. We are making an investment, anticipating a return that will shape the American musical and cultural landscape of the future.”

The list of those supporting the festival tells some of the story of this investment — Georgia Humanities, Yo-Yo Ma’s Silk Road Project, the Arthur M. Blank Family Foundation, WABE-FM, Woodward Academy, and the Community Foundation for Greater Atlanta are some of those who have made major contributions. All have a commitment to preserving and nurturing what the Georgia Humanities tagline calls “the stories that make us and move us.” As Atlantans, as Georgians, as Americans, we are shaped by the arts because they tell us where we have been, who we are, and what we might yet be. 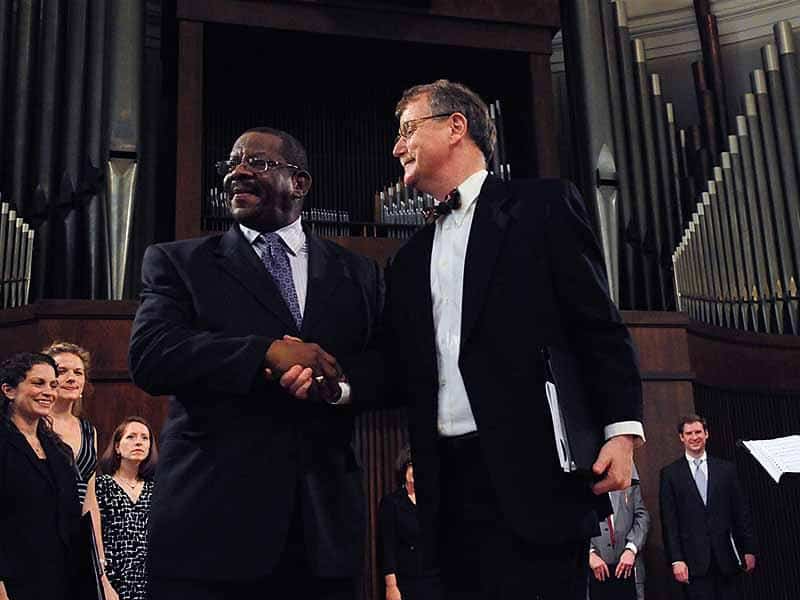 Dwight Andrews, of Emory University and the First Congregational Church, and Steven Darsey, of Meridian Herald, first reprised the festival in 2001. Courtesy of the Atlanta Music Festival

The weeklong festival, from November 14 to 18, includes a panel discussion that will ask leading artists and writers to consider the ways communities shape their work and, in turn, how their communities are changed by their art. What is the artist’s responsibility to society, and society’s appropriate commitment to art? The panelists will include Fahamu Pecou, creator of MARTA’s new murals; well-known actress Brenda Bynum; ethicist and photographer Carlton Mackey; and Pulitzer Prize–winning Atlanta native Taylor Branch.

As it did in 2011, the festival will reprise the historic 1900 premiere of the resonant “Lift Every Voice and Sing.” At its first performance, the song’s lyricist, James Weldon Johnson, and his brother, composer Rosamond Johnson, enlisted the voices of 500 school children in Jacksonville, Florida, to welcome their school’s honored guest, Booker T. Washington, on Abraham Lincoln’s birthday. In 2011, more than 600 Atlanta-area schoolchildren performed the song during a morning symposium at Atlanta Symphony Hall. This year the performance, hosted by Brenda Wood, will take place at Ebenezer Baptist Church on November 16, at noon.

Augusta-born Jessye Norman has performed across the globe. Courtesy of the Atlanta Music Festival

The festival’s concluding gala concert features a work commissioned specifically for the occasion. The renowned composer Adolphus Hailstork has written a choral piece inspired by President Obama’s speech “A More Perfect Union.” That was the speech in which Obama resoundingly called upon both African American and white communities to embrace a more complete vision of America’s promise.

The galaxy of starring musicians will be led by Georgia native Jessye Norman and Atlanta’s own Timothy Miller as soloists, the Vega Quartet, the Morehouse College and Spelman College glee clubs, and the Governor’s Award–winning Meridian Chorale.

As our society continues to look for ways to straddle our differences, reconcile the past to the present, and chart a hopeful path forward, the Atlanta Music Festival offers one proposal for how the arts might lead the way.

Gary Hauk is university historian and senior adviser to the president at Emory University and a member of the Georgia Humanities board of directors.