When walking into a packed stadium, you’re usually making your way through the throngs of people to find your seat. But for the choir students at the Atlanta Music Project (AMP), the folks in the crowd aren’t your fellow attendees but your audience. The young singers are prepped for the biggest concert of their blossoming careers — performing the National Anthem for 70,000 people at the Mercedes-Benz Stadium.

AMP is a tuition-free, intensive music program to teach kids about the world of music. Not only are the classes free, but the instruments come without charge, too.

The program, designed for school-aged children through high school graduation, covers a lot of bases. Students are given the opportunity to learn about the instrument of their choice, receive vocal lessons and dive into music theory.

But it’s not all about hitting the right note or sticking with the tempo. AMP uses music to teach life skills, offer new opportunities and spark social change within the lives of the students and their communities.

“It’s not about creating the next great musician,” AMP Co-founder and CEO Dantes Rameau said. “If that happens on the way, we’re very happy with that. But we really are using the pursuit of musical excellence in order to support students in learning about how far they can go and how good they can be.”

After 16 months of virtual programming, the leaders at AMP are excited to kick off their 12th year and return to in-person classes. Music lessons can be taught online, but the leaders at AMP felt that the pandemic diluted the social aspect of their program.

“When we went online for the pandemic, we were giving them half of what they are used to getting from AMP, which was just the music,” Moody said. “We realized that they really needed to see us and feel what you feel when you’re singing a song with a group of people or playing a piece with an orchestra, and you get that surge of feelings inside of you when you guys hit the sweet spot, and you’re doing a good job.” 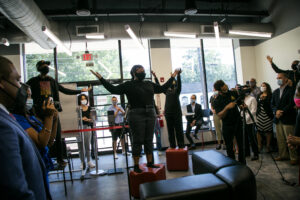 AMP students gave a joy-filled performance of “Stand By Me.” (Photo by Casey Gardner Ford, courtesy of the Atlanta Music Project)

The joy at last week’s 12th season kick-off event was palpable. Vocal students gave a goosebump-inducing performance of “Stand By Me,” and one announced that they were happy to be home.

That communal aspect is key for the students. At the event, a violin student in her fourth year at AMP said the program helped her “come out of my shell.”

One alum, an eight-year vocal student who performed at Mercedes-Benz, said AMP was instrumental in helping him commit to his craft and improved his behavior in and out of the classroom.

“I’m not going to lie, I was a bad kid, but it taught me discipline and courage,” he said. 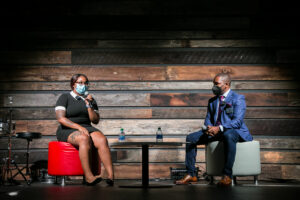 Alum Nyasjah Brooks and AMP Co-founder and CEO Dantes Rameau discuss Brooks’ 12-year run with the program and her plans in music. (Photo by Casey Gardner Ford, courtesy of the Atlanta Music Project)

Alum Nyasjah Brooks has been with AMP since its inception. She began as a third grader who picked up the viola, and over the past decade, she’s performed at least 175 concerts. Now, she’s a sophomore at Clayton State University with plans to minor in music.

“The performances were actually my favorite part. We met different people [and] we traveled the world with the music,” Brooks said. “It also gave me more different opportunities that I probably wouldn’t have had, like going to school because I know the schools I went to, they didn’t offer orchestra.”

So why use music as the vehicle of learning and opportunity? For Rameau, the answer is simple.

“For one, it doesn’t require a physical gift, to be good music,” he said. “Another reason why music is good is because it’s one of those endeavors where you have to be very honest with yourself. If you’re listening, if you are paying attention, if you’re honest, if you’re introspective, you will have to use your ears to get better. It requires trying something hard when no one’s looking.”

This year 350 students are enrolled with AMP and 35 performances are already on the books for the season.

But AMP’s support doesn’t stop at graduation. With the help of the Chestnut Family Foundation, the organization is rolling out a scholarship fund for AMP seniors and alumni educational and living expenses.

Through and through, AMP’s mission is to support the youth of Atlanta.

“Music has completely transformed our lives and the lives of the youth that we serve,” Moody said. “From giving them self confidence, creating strong relationships with the people that they perform with, giving them the skills that are transferable to their academics… It really builds them into a holistic individual that makes them a better person for themselves, for their family, for their school and for their community.”

If a child in your life is a budding musician or needs a supportive after-school environment, click here to check out all AMP has to offer.