Atlanta – our new Mercedes-Benz Stadium is a keeper 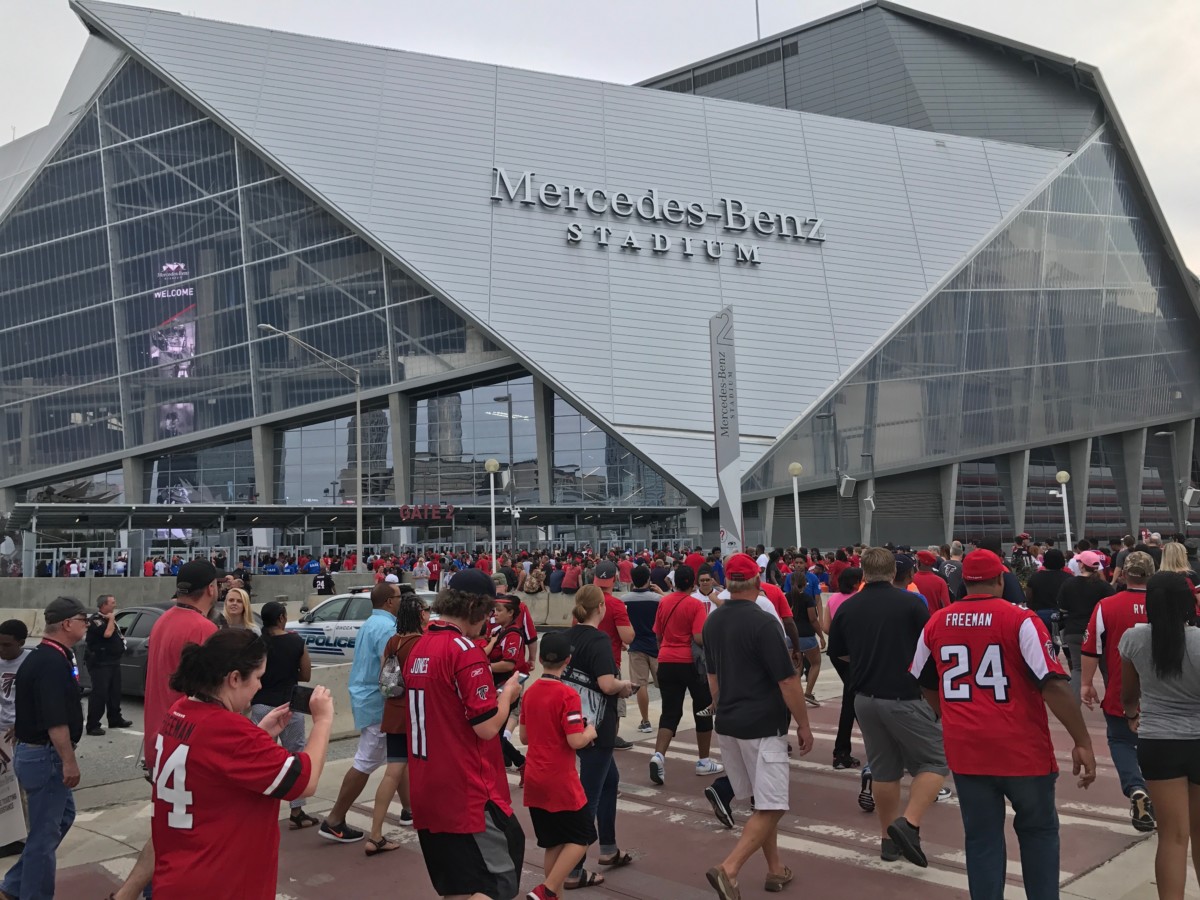 From the first time I saw the design for the then-unnamed new Falcons stadium in October 2013, I was smitten.

Architect Bill Johnson poetically described how the first-of-its-kind retractable roof would open with eight panels traveling along octagonal tracks to create the opening by saying: “The heavens will open up.”

While the retractable roof is still being calibrated (it will be fully functional later this fall), the new Mercedes-Benz Stadium did not disappoint during its opening event – an exhibition game between the Atlanta Falcons and the Arizona Cardinals. 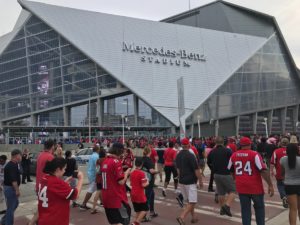 Fans enter the Mercedes-Benz Stadium Aug. 26 for the first game in the new venue (Photo by Maria Saorta)

Four years ago, Johnson said the challenge in design today is to create “look up” moments – to get people to put down their cell phones and become an engaged part of the stadium experience.

There’ are no shortage of experiences to inhale in the new stadium – from the biggest-ever halo video board to the multiple gathering places where fans actually can be on the field to being able to watch the game from the Skybridge with Atlanta’s skyline as a backdrop.

“This is high cotton,” said Atlanta City Councilman Andre Dickens while visiting the AMG Lounge next to the Mercedes Benz Club.

And then Dickens expressed nostalgia for the Georgia Dome, a venue he loved – one that felt comfortable and familiar.

This is Atlanta’s story. We build. We tear things down. And then we rebuild. We’re a city of shifting sands. Instead of building edifices to last centuries, most of our mega-sports venues have lasted less than 30 years.

First came the Atlanta Fulton County Stadium – a multipurpose facility that opened on April 9, 1965. It was the first home for the Atlanta Falcons and the Atlanta Braves. It was where Hank Aaron broke the homerun record. And it’s where Atlanta won its first and only world championship in 1995.

It was torn down after the 1996 Summer Olympic Games. By that time the Atlanta Falcons had started playing in the Georgia Dome, which opened in 1992; and  in 1997, the Atlanta Braves moved into the reconfigured Olympic Stadium that was transformed into Turner Field. 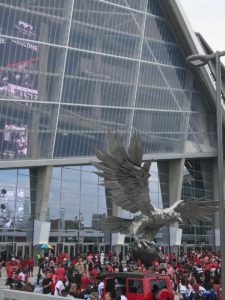 And let’s not forget the Omni Coliseum, the first home of the Atlanta Hawks and the Atlanta Flames, which opened in 1972. It lasted exactly 25 years – demolished on July 26, 1997.

Philips Arena was built on the same footprint as the Omni, and it opened on Sept. 19, 1999. The new owners of the Atlanta Hawks have decided it’s time for a major retrofit of Philips Arena – one that will dramatically change the inside bowl of the venue. But to the credit of the city and the new owners, they are not tearing down the building and starting over.

The year 2017 will go down as a high watermark year for Atlanta’s professional sports venues. On March 31, the Atlanta Braves opened the new SunTrust Park in Cobb County, leaving behind Turner Field. Georgia State University is reconfiguring that stadium as home for its football team.

And on Aug. 26, the Atlanta Falcons played (and lost) their first game in the new Mercedes-Benz Stadium – a venue Dickens described as a show-stopper with all the latest “bells and whistles.”

Getting to this point was full of drama – the costs for the stadium with the retractable roof kept climbing – with Atlanta Falcons owner Arthur Blank being responsible for all price increases. In order for the new stadium to be built next to two MARTA stations, the Falcons and the Georgia World Congress Center had to acquire two historic African-American churches – a painful and expensive move.

But it all felt worthwhile as the stadium glistened on opening day. Those memories of stops and starts were in our rear view mirror. While at the stadium, I saw the steeple of the new Friendship Baptist Church keeping an eye on Atlanta’s modern temple for football, soccer and entertainment.

And the Georgia Dome? It will bite the dust in an implosion on Nov. 20.

My former AJC colleague, Mark Bradley, wrote two excellent columns this week – one thanking the Georgia Dome for its role in the evolution of Atlanta. “The Dome changed Atlanta and Atlanta’s sports,” Bradley wrote in the Atlanta Journal-Constitution. “The Dome made us a destination for every major event. Without the Dome, there would have been no Super Bowl here, no continuing SEC championship, no Final Four beyond the Omni’s 1977 one-off. There would have been no Olympics.” 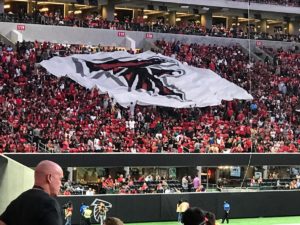 And then he wrote a column Saturday night after visiting Mercedes Benz Stadium for the first time calling it spectacular.

“I’m very proud and excited this day is finally here and the city can enjoy this facility,” Holder said. “I’m extraordinarily proud of my team.”

Mike Egan, an attorney who joined the Blank organization, smiled as he jokingly said: “Here we go – another stadium.” Egan had helped negotiate several of the complex legal agreements for the Falcons organization, and Saturday night was an opportunity to reap the benefits of everyone’s hard work.

“At long last,” said Kenny Blank, the eldest son of Arthur Blank, said before the game, Kenny, and his wife, Nancy, were in the AMG Lounge – enjoying refreshments before the game. The family had arrived at 2 p.m. to fully savor opening day.

Kenny Blank verbalized my own thoughts. Other great cities treasure their architectural jewels – keeping them as cornerstones for generations, even centuries.

Can the Mercedes Benz Stadium stop Atlanta’s propensity to demolish and rebuild?

Can we as a community finally accept that we’ve spent enough time, money and energy building cathedrals for our professional sports teams?

Can we resist pressure from the National Football League to build or rehab stadiums in order to host mega-events like the Super Bowl?

Can we as a city finally celebrate where we are and not keep trying to reinvent ourselves into a newer, bigger and pricier city?

The Mercedes-Benz Stadium can be our exclamation point – an anchor for an Atlanta that’s here to stay. 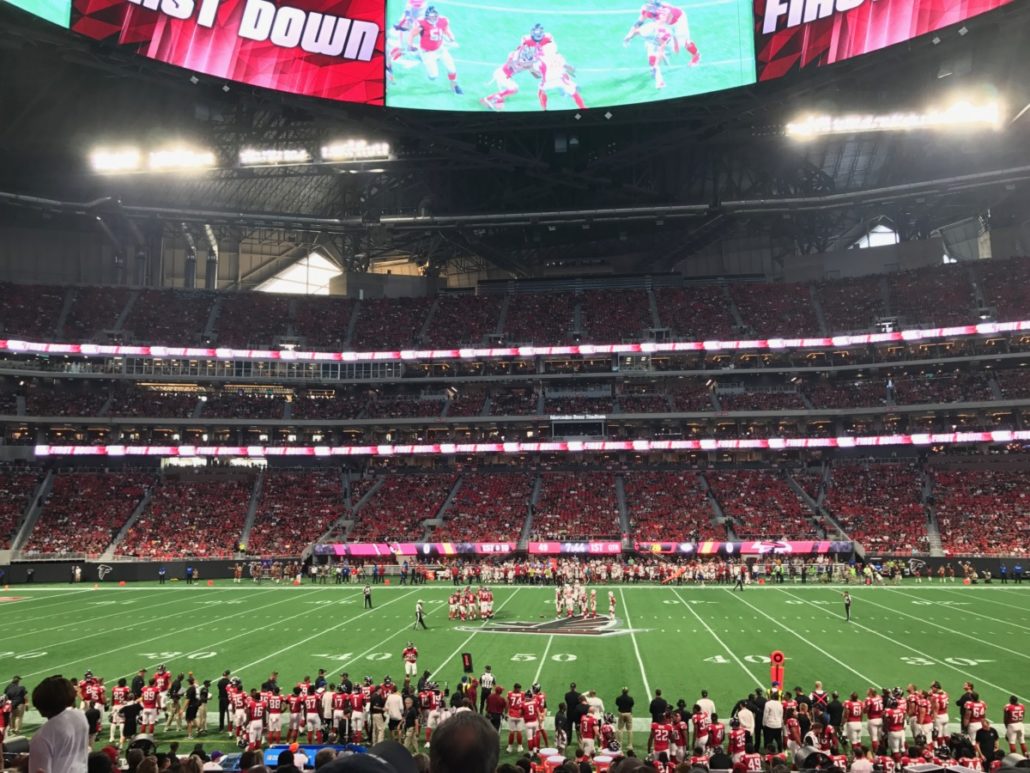 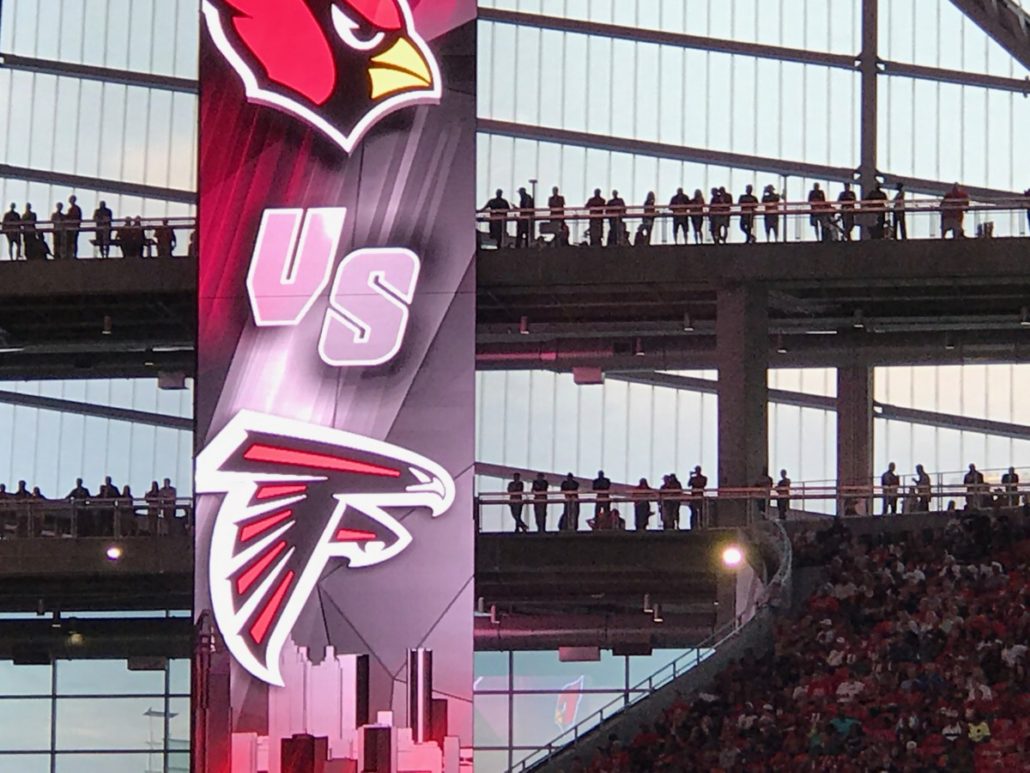 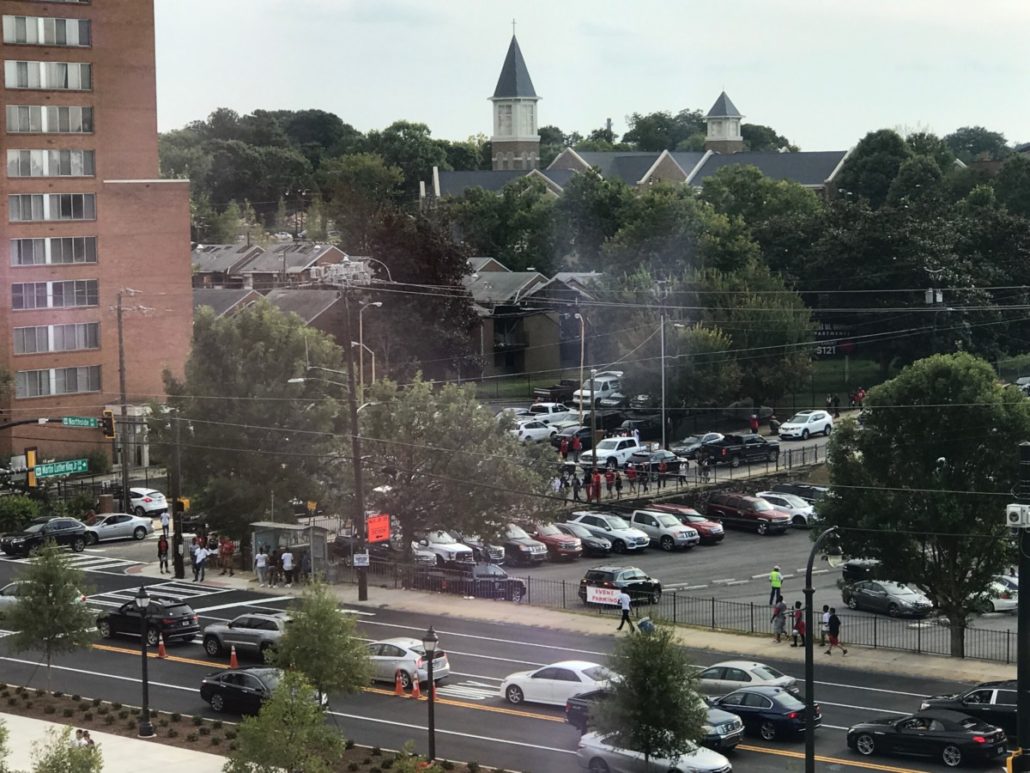 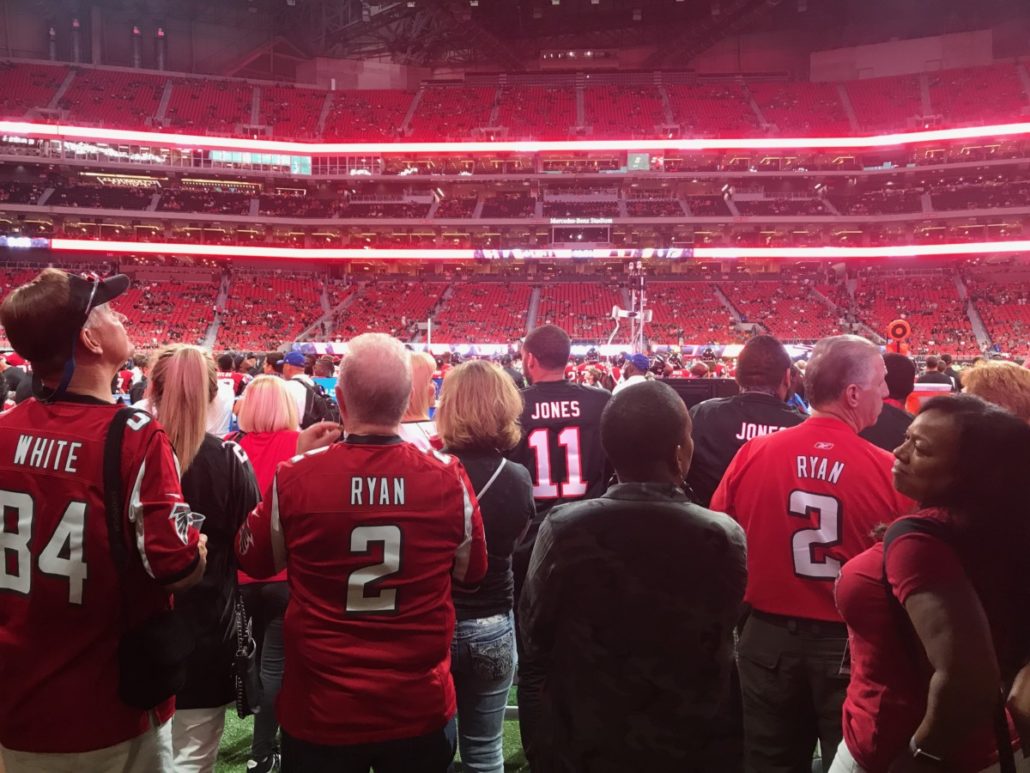 From the Mercedes-Benz Club, fans actually can watch the game from the field (Photo by Maria Saporta) 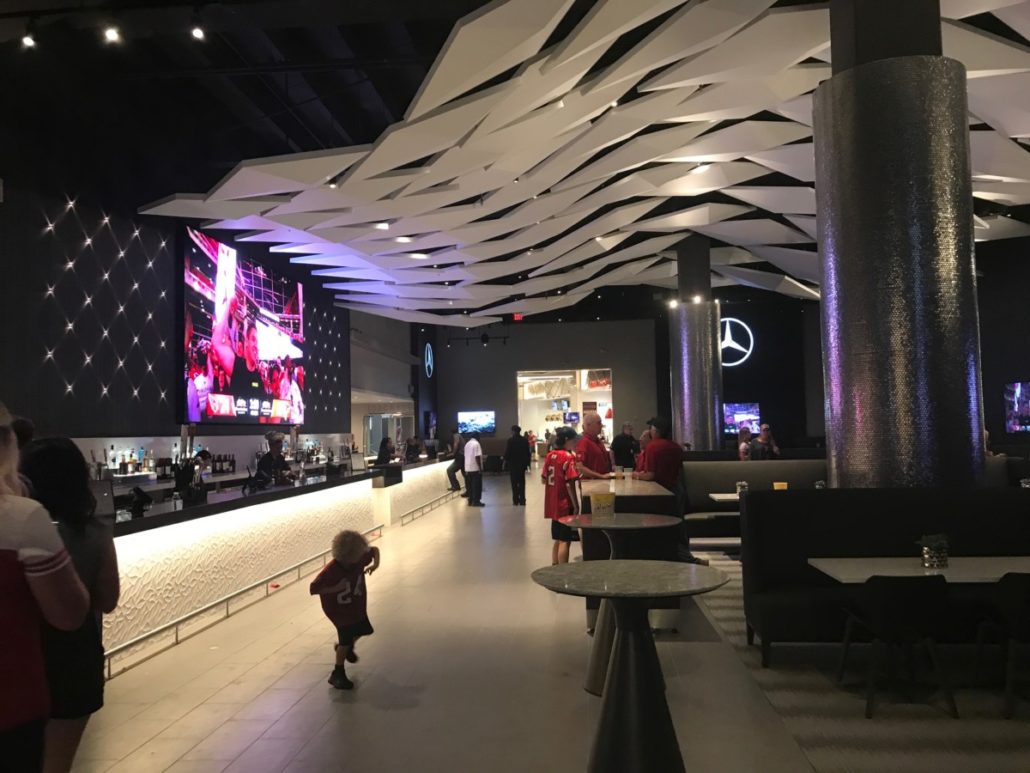 A view of the Mercedes-Benz Lounge – an area reserved for suite-holders, premium club seats and special guests (Photo by Maria Saporta)