Ebola poses little threat in the United States , but the same is not true for several countries in West Africa, according to Dr. Thomas Kenyon, director of the Center for Global Health at the Atlanta-based Centers for Disease Control and Prevention.

Because of the presence of the CDC and a host of other global health organizations in the area, Atlanta is playing a critical role in the fight to contain the Ebola outbreak in West Africa, one of the worst in history.

Kenyon gave a short briefing to the Rotary Club of Atlanta Monday, and he also sat down for an interview before his talk, to give an update of how efforts are progressing to contain the outbreak.

The CDC has 55 people deployed in West Africa – primarily Guinea, Liberia, Nigeria and Sierra Leone — working on the public health aspects of Ebola. That includes research, diagnosis, infection control and education, but they are not involved with the primary medical care of patients with Ebola. 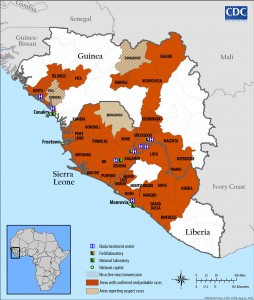 Where the Ebola outbreak is greatest (Click to enlarge) –  (Source: the CDC)

The CDC also has another 200 people in Atlanta working on the Ebola outbreak trying to make sure it is brought under control as quickly as possible.

“We will bring this under control,” Kenyon said. “The health system is overwhelmed. Tragically more lives will be lost.”

Although Ebola has been around since 1976, this outbreak has infected hundreds of health care workers. Kenyon said that 10 percent of all the doctors in Liberia have “succumbed” to the virus.

It is critical for health officials to monitor the borders of different countries to make sure that the contagious virus is not spreading to new countries.

One of the problems with Ebola is that its symptoms are similar to the flu, and during the period when someone is most contagious, an infected person may not even realize he or she has Ebola. Still in order to become infected, someone actually has to come into contact with the bodily fluids of someone with Ebola.

Even a corpse is still contagious, and one of the biggest problems is having to educate people to change their customs about the way they prepare their dead — which involves washing their bodies before burial so they won’t get infected after their loved ones have died.

“It is a massive cultural shift,” Kenyon said. “That messaging is going out, and it has to be handled in a culturally appropriate way. It is a really serious problem. And it’s not under control, particularly in Liberia and Sierra Leone.

The good news is that the CDC and its partners, such as the World Health Organization, know how to contain the virus. First one must find the people who have Ebola. Then they must be isolated and health care workers have to practice diligent infection control.

“There can’t be any contact with any skin because that puts a person at risk,” Kenyon said, adding that a patient has a better shot at survival if he or she is given meticulous medical care. “The survival rate is much improved. There’s a 50 to 60 percent mortality at present. It has been as high as 90 percent at times.”

Having self-contained Ebola treatment units helps keep those with the virus apart from otherwise healthy people.

“The CDC has been out there since March or April,” Kenyon said. “We’ve been deploying teams for some months now. It’s been in the past month that we’ve created a surge.”

Asked about the role Atlanta can play in helping minimize the global health risk emanating from this outbreak, Kenyon said he would need much more time to give a complete answer.

Because the CDC is a federal agency, it can not do its own private fund-raising when a special emergency like an Ebola outbreak occurs.

Atlanta also is home to the CDC Foundation, which has a Global Disaster Fund.

Charlie Stokes, president and CEO of the CDC Foundation, said it has just received its first major gift to help fight the Ebola outbreak. The Robert Wood Johnson Foundation gave the CDC Foundation $1 million, and it usually does not make grants for these kind of causes.

Stokes said the funds will go towards getting portable computers, face masks, protective body suits and other tools needed to fight the outbreak.

But this is just the beginning. “We need $8 million to $9 million,” Stokes said. One of the bigger projects would go towards creating Emergency Response Centers to serve as hubs for communication and distribution.

Meanwhile when asked about the possibility of new vaccines and medications to treat Ebola, Kenyon said there is nothing that has been tested in clinical trials that would be available for those currently fighting the virus.

If and when a vaccine were to be made available, it likely first would be given to the health care workers before being distributed to the general public. Also the drugs that the two infected health care workers being treated at Emory University Hospital have received medicines not yet available. partly because of a scarcity of doses.