Atlanta region unites at neighborhood level with exchanges and dialogue

As the National Center for Civil and Human Rights reached its highest point in topping off point Friday, the Atlanta region was  launching its One Region Atlanta initiative on Saturday at the fifth annual Neighborhood Summit.

The two events were interconnected with the keynote talk Saturday given by Doug Shipman, CEO of the National Center, which is scheduled to open on Memorial Day on 2014. 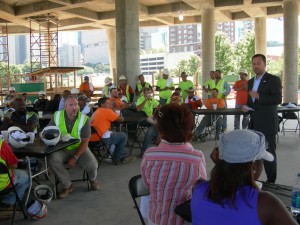 As Shipman sees it, Atlanta’s strength has been built through dialogue — with an exchange of ideas and respect for each other.

“Exchange matters,” Shipman said. He said he often hears a complaint. “’Atlanta is a wonderful place. We talk too much, but don’t get much done.’ That makes me angry. The exchange matters. Conversation matters.”

The strongest economies are those that trade with each other, he said. Studies have shown that the people who live the longest are those who have built strong friendships and relationships in their lives. “Exchange matters,” Shipman said.

The Atlanta region is one that can and should continue to define itself as a place of ideas, Shipman said.

“Over half of the people who live in this region have moved here in the last 15 years. We can tell them how (Atlanta) works,” Shipman said. “We have the ability to define for them how we want to be. We have a unique legacy in Atlanta.” 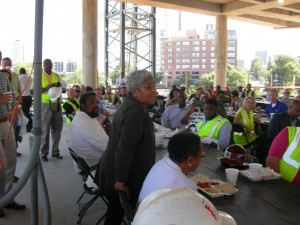 Shipman said it is a region that has been able to prosper while building inter-racial, inter-cultural and inter-ethnic relationships. It has several strengths at its core, such as the historically black colleges that have been in Atlanta since the late 1870s providing a wealth of educated citizens that were already leaders when society became more integrated.

“Religion has aways been a source of good in this community,” Shipman said, recounting a moving story of Atlanta’s past of when the Temple was bombed and black clergymen went there to protect it from further damage.

“Compromise has always been a welcome necessity,” Shipman said. 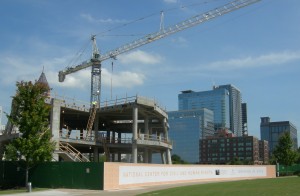 A front view of the Center from Pemberton Place

A record 400 residents from more than 20 counties spent Saturday listening to ways to make “One Region Atlanta” — an effort that looks to build strong partnerships between various religious groups including Islam. The foundation unveiled a website: www.oneregionatlanta.org, and said it was one of many regions around the country embarking on this initiative.

But for Atlanta, it’s just an outgrowth of what the city is all about. 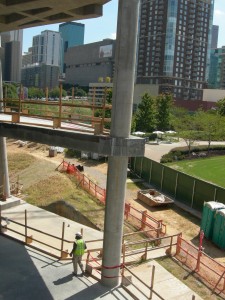 At the Center’s Friday topping off BBQ luncheon for construction workers and VIPs alike, former Atlanta Mayor Shirley Franklin recalled when early during her administration Evelyn Lowery, the wife of Rev. Joseph Lowery, came to see her urging her to build a civil rights center in Atlanta.

The mayor explained to her that she had a lot on her plate — a budget deficit, a crumbling sewer system and other major challenges. But still, Mrs. Lowery insisted.

“Okay, we’ll put it on the list,” Franklin told her.

This past week, on Wednesday, Mrs. Lowery had a stroke and is recovering.

“Before coming here this afternoon, I actually went to see Mrs. Lowery to say we appreciate her vision,” Franklin told those attending the topping off event. “I’m someone who pays attention to my elders. I’m someone who respects my elders.”

Franklin also thanked A.J. Robinson, president for Central Atlanta Progress, for the role he had played in helping make the Center a reality. “He doesn’t take any credit,” Franklin said, but without his help and dedication, it may never have reached this point.

So Atlanta continues to find ways to link the region together — whether it be its diverse residents, its varied neighborhoods or its bridges to history and the future.