The Atlanta Community Food Bank is receiving hundreds of thousands of dollars from the Rotary Club of Atlanta to help provide 500,000 meals to families over the summer.

The effort is part of a partnership with AMB Sports and Entertainment, Mercedes-Benz Stadium, the Atlanta Falcons and Atlanta United, which is helping prepare meals for the Atlanta Community Kitchen initiative.

In the last couple of months, Rotary donated $100,000 from its unused meals at meetings that had already been paid for with membership dues; and then its 24- member board raised another $100,000 to go to the effort. 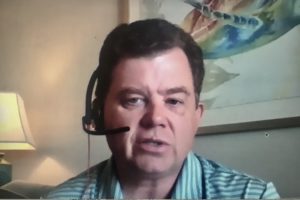 At a Zoom Rotary meeting on Monday, the club announced that an anonymous member has issued a challenge grant of another $100,000. All members of Atlanta Rotary, the entire metro Atlanta Rotary district and the general public are invited to donate to the effort.

By the end of one-hour meeting, Cannon Carr – president-elect of Atlanta Rotary – announced that a member had just contributed $20,000 towards that match.

“We have deep gratitude to the Rotary Club of Atlanta for this investment in this initiative and for the investment many members have made to this initiative,” said Kyle Waide, president and CEO of the Atlanta Community Food Bank. 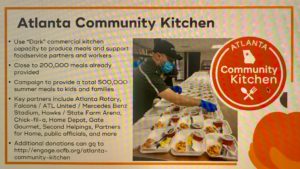 Slide with details about the Atlanta Community Kitchen

Waide said the demand for food in the community is up 40 percent since early March. He cited one example, complete with a photo, of 2,000 cars in line for food distribution at Atlanta Motor Speedway in Henry County.

“Right now, the initiative has been designed through the summer months,” said Stephen Cannon, CEO of AMB Sports and Entertainment, who implied the initiative could be extended into the fall. “When Kyle calls, we always answer the call.”

Cannon said that even though Atlanta United will start playing at Mercedes-Benz Stadium again in July. “Right now, we’re not sure if it’s going to be with fans or without fans,” he said. But he added there always would be capacity at the stadium in terms of space and personnel to prepare meals for the community.