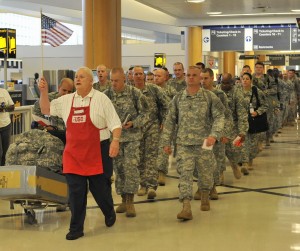 Several times a day, military troops walk single file through Hartsfield Jackson International Airport, Atlanta’s crossroads with the world. As they parade through the heart of the airport – the airy atrium – travelers applaud and cheer. Here, the national spirit so often confined to July 4 is demonstrated every day.

On the mezzanine twice a month, the troops stop in for hot dogs and chili fixed by a group of Vietnam veterans from Atlanta. Along with America’s quintessential fast food, the Atlanta Vietnam Veterans Business Association (AVVBA) serves up something they wish they had enjoyed: public support.

The crossroads for both generations is the Jean R. Amos USO, which every day in Atlanta welcomes in a morning plane full of 240 troops returning home on what is know as “Operation R&R.” Later, volunteers bid farewell to 240 more somber troops returning to their overseas posts.

In a country full of yellow ribbon car magnets and other displays, the USO doesn’t stand alone. But these Atlanta Vietnam veterans recall how USO volunteers have always stood for them, and that’s why they now stand together — with frankfurters however you please. 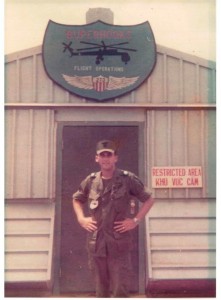 For Max Torrence of Duluth, Atlanta’s airport and July 4 bring back memories of another crossroads. The airport in San Francisco was a lonely place for a 23-year-old Army captain coming home from flying helicopters north of Saigon.

From the air, he had felt relatively safe, and worried for the guys in the bush. The ground troops never knew what was around the next turn, or what they would see when they pulled back a branch. Torrence tried to do everything he could to deliver what they needed.

But there was little apparent emotional support or cover as Torrence traveled back home in 1971. Unlike the troop units who travel together today – Atlanta is the main military gateway for the whole country – soldiers like Torrence came back from Vietnam by themselves. “You didn’t feel gratitude,” he said. “We were basically overlooked.”

In the San Francisco airport, “It was late at night and I had missed my flight to Seattle [home to his wife and 13-month-old],” said Torrence, now 65. Help came when “a lady who looked like a grandmother welcomed me to the USO.”

Torrence hung up his uniform outside the shower, got clean and shaved and picked from the USO’s selection of new underwear. “When I got done, my uniform was already pressed and my shoes cleaned,” he said. “I looked like a pretty sharp soldier, and that memory of the USO was burned into me.”

Three years after 9/11, the 350 members of the Atlanta Vietnam Veterans Business Association – their mission now being to promote a positive image of Vietnam vets – began a partnership with the USO.

This year alone, the group has given 855 volunteer hours, $4,291 from raffles at their monthly luncheons, and $6,440 collected last weekend at local Kroger stores participating in the Kroger/USO Round It Up for the Troops project. (A shopper can round up a purchase to the next dollar, and that change is donated).

“It’s our honor and privilege to say thanks to today’s warriors,” said Torrence, who moved to Atlanta via Fort Gillem and later retired as Wachovia’s mortgage banking director in Atlanta. 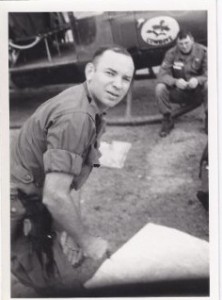 Capt. George McCoy in Vietnam, 1966, as an Infantry Company Commander briefing a helicopter crew before a combat assault on an enemy location.

At Bennett’s side in the USO kitchen is former Army paratrooper George McCoy of Marietta, who served two tours in Vietnam as an airborne infantry officer. After 35 years in the Army, he retired as a colonel and went on to serve a decade as deputy commissioner of Georgia’s Department of Veterans Services. He’s still the real McCoy: After his double heart valve replacement, he only missed four weeks of grocery shopping for the chili dog buffet. 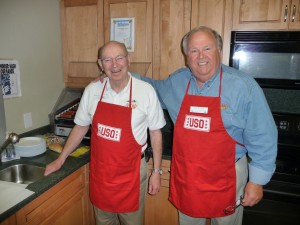 “Chili, jalapenos — any kind of dog, they’ll make it,” said Mary Lou Austin, the Atlanta USO director for 30 years. She joined the USO in 1969 as a way to serve those who serve; later, she married a retired Army officer who had fought in Vietnam.

USOs serve American troops across the world, and in the latest round of accreditation, the highest rated USO center was Atlanta’s. Her operation runs on 1,100 volunteers – bolstered by a long waiting list – and of those, the Vietnam-era supporters “are some of the most loyal volunteers that we have.”

On July 4, the veterans and other volunteers step aside for a cadre of professional cooks from the Atlanta Culinary Federation who donate their time and expertise to put on the USO’s holiday buffets. Operation Chefs Unite will do a red, white and blue gourmet barbecue. Hot dogs may be on the menu — after all, it is July 4. 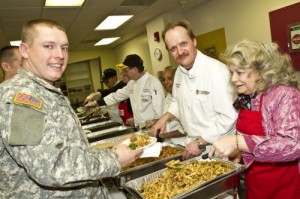 Mary Lou Austin, right, pitches in to serve a holiday buffet at the USO. Austin joined the USO during the Vietnam War to serve those who serve.

“Today’s troops are the legacy of those first American patriots who fought for liberty,” Austin said of the Independence Day replay.

The veterans at these crossroads offer a shoulder for the trauma of what every generation of soldiers experience. Each day’s parades across the airport atrium are a reminder of the July 4 parades that salute the troops – including those who will never come home.

“I had a friend killed after only four months in Vietnam; another killed a month before he was coming home,” Torrence said. “That sticks to you. I think about the young men and women we see at the airport, and wonder what happened to them. Did they get home safe? 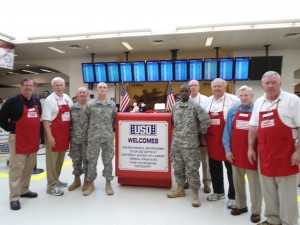 “For me, the special feeling of July 4 is a feeling about sacrifice of young men and women who serve our nation, and how short and brief their lives can be in service to their country,” he said.

One Marine major who enjoyed one of their chili dogs later wrote the Atlanta Vietnam vets about his trip’s end. He was on an outbound trip, back to harm’s way.

“He sat down in his quarters, with stacks and rows of care packages all from the American public,” Torrence recalled. “He said all that was a tribute to the Vietnam vets, because we were not shown gratitude, and the American public said, ‘Never again.’ ”