AUSTIN — The invitation arrived on Wednesday afternoon, shortly after the LINK delegation of 120 Atlanta leaders had arrived in the capital city of Texas.

Santiago Marquez, president and CEO of the Atlanta-based Latin American Association, had received an invitation to go to the White House to celebrate Cinco de Mayo with President Joe Biden and First Lady Jill Biden. 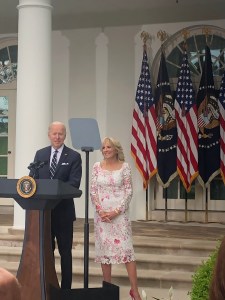 After speaking with a friend who told him he couldn’t pass up the once-in-a-lifetime invitation to go to the White House, Marquez decided to go — even if it meant him missing part of the three-day LINK trip.

So, Marquez flew to Washington, D.C. early Thursday morning to participate in the 4:15 p.m. ceremony that afternoon before flying back to Austin Friday morning to rejoin the LINK delegation.

“It was incredible,” Marquez said upon his return to Austin. “I got really teary when I was there.”

Marquez said the ceremony included about 70 people — mostly Hispanic leaders from around the country — and the whole event was tasteful and historically accurate of the Cinco de Mayo celebration of Mexico’s independence from French rule. In the United States, Cinco de Mayo has become more of a day to party rather than a Mexican independence celebration.

“It was really emotional for me,” Marquez said. “As we were walking into the White House and the Rose Garden, we heard authentic Mexican music, and they had decorated it with all the colors from Mexico. When we went to the Rose Garden, they were passing around Mexican hors d’oeuvres and Margaritas. It felt very festive and authentic.”

Marquez said the ceremony was kicked off by First Lady Dr. Biden, who made everyone feel at home. Another special guest was the first lady of Mexico — Beatriz Gutiérrez Müller — the wife of Mexican President Andrés Manuel López Obrador.

President Biden addressed the group during the ceremony.

“He was outstanding,” said Marquez, who was surprised by how well he was received. “When everyone found out I was from Georgia, they wanted to talk to me. They know Georgia is in play. Georgia is still very much top of mind.”