The Atlanta business and government community have embraced the Better Buildings Challenge — an effort that was launched a year ago at the Downtown Development Day.

In that year, the city went from 2 million square feet being part of the effort to become more environmentally sustainable to now 42 million square feet. In a video presented at the 2012 Downtown Development Day on Nov. 7, Atlanta Mayor Kasim Reed said: “Our competitors is paying attention.”

The goal is to reduce energy and water consumption by 20 percent by 2020.

Maria Vargas, director of the Better Buildings Challenge for the U.S. Department of Energy, congratulated Atlanta’s leaders for all they were doing to improve the performance of their buildings in terms of energy consumption, water use and green building practices.

“The commitment that you have made is truly a model for the rest of the country,” Vargas said. “The work that Atlanta is doing with its private sector is really distinguishing Atlanta.”

Vargas said the challenge is not meant to pit one city against another. Instead, it is aimed at getting greater acceptance from communities and organizations across the country to adopt green building practices.

“There are still a lot of challenges,” Vargas said. “It’s not just an energy story, but a business story. We need people willing to step up and lead the challenge.” 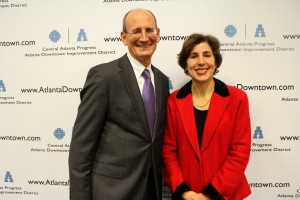 A.J. Robinson, president of Central Atlanta Progress, with Maria Vargas, director of the Better Buildings Challenge for the U.S. Department of Energy (Special)

Vargas said that the U.S. Department of Energy is working with 110 organizations nationally — including Best Buy, Staples and other major companies.

“About have of our participants are institutions — universities, cities and states,” Vargas said. “We working with almost 40 cities. Atlanta was one of the first three cities to join.”

As a result, Atlanta has become a “showcase” model, she said.

“You are leading other cities. You are showing the way,” Vargas said. “You are working truly as a community to drive greater efficiencies.”

The Hyatt has low flow toilets and urinals that yield a savings of more than 8 million gallons of water per year. As a result of the hotel’s commitment to sustainability, the Hyatt has realized a 35 percent reduction in energy and water consumption since 2000.

The Hyatt also is planning to replace its chillers and boilers to improve efficiency and rainwater reclamation for use in cooling towers and irrigation.

Two other buildings were finalists for the first Excellence Award — The Turner building at 133 Luckie St. NW and St. Luke’s Episcopal Church at 435 Peachtree St. NE.