The $17 million gift from the Arthur M. Blank Family Foundation to the National Center for Civil and Human Rights is part of a $50 million capital campaign to expand the Center’s offerings.

Jill Savitt, president and CEO of the Center, said during a press briefing Thursday afternoon the $50 million capital campaign is currently in a quiet phase. The plan is to build two new wings of the destination that is adjacent to both the Georgia Aquarium and the World of Coca-Cola.

“I know it’s weird to say on a press conference that we’re in a quiet phase,” Savitt said. “But this gift is too generous, and the leadership is too profound to miss this. This gift from the Blank Foundation takes us to half of a larger goal of $50 million.” 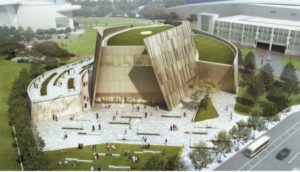 Savitt said it also has received another $5 million from the Wilbur and Hilda Glenn Foundation (the largest private donor when the Center first opened in 2014. It has received other funds that puts it at the half-way mark of its campaign.

“We’re going to launch it officially when we have a lot more ducks in line,” said Savitt, who added the “expression of confidence” from the Blank Foundation is so important to get other donors to “jump on this train with us.”

It will cost about $30 million to build both a West Wing and an East Wing of the Center. The rest of the funds will go towards programming and innovation. The Center already is conducting diversity, equity and inclusion training for law enforcement. Savitt also announced the Center will be training all members of the Atlanta Police Department starting on March 1 and continuing until March 1, 2022.

“Another conversation we’ve had with the Blank Foundation is about the importance of this being in Atlanta, and Atlanta being the leader on civil rights for the nation,” Savitt said. “But we very much as part of this shift from an attraction to institution. We believe we can be a national institution, and we can be, because we’re in this city, and the city has had the wind at our back. The history of this city is so important nationally, especially right now.” 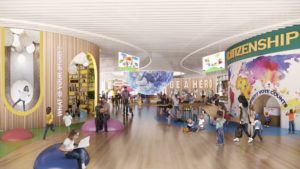 Blank said it was “an honor and a privilege” to be in a position to support the Center and its work during “one of the most critical times in the history of our country” referring to the racial unrest during 2020.

“It’s just an honor for our family,” Blank said, thanking former Atlanta Mayor Shirley Franklin, the Center’s board chair; and A.J. Robinson, president of Central Atlanta Progress, which led the effort to develop the Center. “We’re very excited about continuing this work because we think it’s much needed in this environment today.”

Donald Byrd, the Center’s chief operating officer, said the expansions of the East and West wings will add another 20,000 square feet to the 42,000-square-foot facility – essentially expanding it by 50 percent.

“it’s going to really create the ability to do a lot of things in that small amount of space and repurpose some things in the museum with some enhancements in the current museum,” Byrd said. “We hope at the end of the day there’ll be more connectivity in the museum.”

Savitt said the Center will operate not like just an attraction, but “more like an institution that has a museum.”